How churches are trying to raise the college graduation rate

It’s a story so common that policymakers struggle mightily to overcome it in their efforts to increase the proportion of Americans with degrees. Yet enrollment has been going down, not up.

Rhodie bucked that trend. A rare exception, she has now returned to college for a degree in social work. And her motivation came from a source as persuasive as it was unexpected: the pastor at her church.

“I don’t claim to know all the rules and regulations about re-entry into college, but where I can be helpful and functional on the team is to have access to the people who trust me enough to say, ‘Pastor Cleveland, I really want to come back and do this,’” said the pastor, Odell Cleveland, of the 4,000-member Mount Zion Baptist Church here.

The idea of using churches to help drive adults back into college started with Degrees Matter!, a nonprofit in Greensboro. If politicians, business leaders and schools couldn’t do it, the organization reasoned, maybe churches could.

“What we’re trying to do is move the needle to get as many people into education programs as possible,” said the organization’s associate director, Camy Sorge. “It’s really about, ‘How can we reach the most people?’”

Mount Zion is the only church that so far has teamed up with Degrees Matter! but Sorge said she hopes to enlist more.

Thirty-six percent of Greensboro residents aged 25 and older have bachelor’s degrees or higher, but Degrees Matter! shares the goal of the White House and other advocacy groups of raising that to 60 percent by 2025.

Related: Why are graduation rates at community colleges so low? 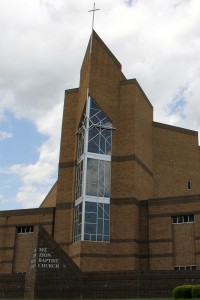 So far, this national effort is way behind schedule. With 10 years to go to that 60 percent target, the proportion of people with degrees nationwide is now 40 percent, up only about 2 percentage points since the goal was set in 2008, according to the Lumina Foundation, which tracks this. (The Lumina Foundation also gives money to Degrees Matter! and is a funder of PBS NewsHour and The Hechinger Report, which produced this story.) “Increasingly worrisome,” Lumina said, were rates of attainment of 28 percent for blacks and 20 percent for Hispanics.

One problem is that many adults like Rhodie enroll in college only to drop out when faced with the responsibilities of life, wasting their tuition and forgoing higher wages.

The average salary for a person 25 to 34 with a bachelor’s degree is $46,900 a year, versus $30,000 for people with just high school diplomas, the U.S. Department of Education’s National Center for Education Statistics reports. Yet only 55 percent of first-time students who entered college in the fall 2008 had earned a degree six years later, according to the National Student Clearinghouse.

With help from the church and others, Degrees Matter! has helped 261 people enroll in or return to college over the past year, Sorge said.

Rhodie was speaking with Cleveland more than a year ago when she told him about her dream of earning a bachelor’s degree before her son graduated from high school, as a way of being a role model for him.

The pastor offered more than just a sympathetic ear.

“He said, ‘Let’s get you back in school. We want to help you.’ And from Day One that’s what they’ve been doing,” Rhodie said.

The church uses 10 percent of the tithings received to pay for day care, which Rhodie’s children attend, a book scholarship, and emergency assistance funds to help with tuition and other college costs. Degrees Matter! provides services including financial counseling and directs students to organizations that can cover some of what they can’t afford themselves.

“It’s amazing what little things can be done to encourage [people] to stay and get back in school,” Sorge said. “It can be as simple as finding an extra $400 for them to buy books, or it can be contacting United Way to get reliable sources of childcare for them or it could be possibly that they need money for a bus pass.”

Cleveland said his role in the partnership is to be a “cheerleader” by encouraging those in his congregation who want to return to school to get help from Degrees Matter! The church regularly hammers home this opportunity by word of mouth and through its Zion News Network (called ZNN by the congregation), a five-minute weekly “newscast” video shown before Sunday service.

Cleveland described the church as a “bridge” that helps inform people it’s possible to go back to school and puts them in touch with the staff at Degrees Matter! From there, the organization steps in to provide whatever services each student needs.

Rhodie is now finishing up general-studies courses on her way to that bachelor’s degree in social work. Her son is entering 11th grade in the fall and she said she wants to set a good example for each of her three children.

“I can push on them the importance of education,” she said. “But what does it mean if I didn’t finish my degree?”