Popular, short-term training programs may not pay off for students

Workers considering heading back to school to boost their earning power may want to avoid certificate programs that last less than a year.

By the end of the decade more than 60 percent of U.S. jobs are expected to require some credential beyond a high school diploma. But a study out today found students in Washington state who completed short-term certificates, which are offered in fields from accounting to welding, saw no meaningful change in their earnings or their chances of being employed.

Despite the lackluster results, short-term credential programs have become more common. In 2000, students earning short-term credentials made up 16 percent of people earning more than a high school diploma but less than a bachelor’s degree. By 2010, they accounted for a quarter of all such graduates.

Researchers looked at students who first enrolled in community college in the 2001-2001 school year. They started a year before they enrolled and tracked their earnings for eight years. 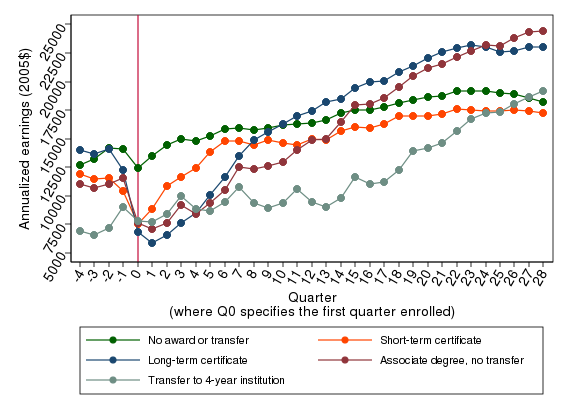 Researchers tracked students earnings by quarter for eight years. Even those who left college without completing any credential were earning more than short-term credential holders at the end of the tracking period. Courtesy of Mina Dadgar and Madeline Trimble.

For Mina Dadgar, one of the study’s co-authors and director of research at the Career Ladders Project, their data underscores the value of most community college credentials.

“We find that high school students who are four-year bound get all of the attention from college counselors,” she said in a phone interview with the NewsHour. “There’s bias against counseling students to go to community colleges, but we find high return for credentials that are really popular.”

The growth of short-term programs could have to do with state cuts to higher education budgets, which have fallen hardest on the country’s community colleges.

“One of the things we hear anecdotally is state funding for new credentials has sometimes been restricted to credentials of less than a year,” Dadgar said. “It’s done with the good intention of making sure more students benefit from credential programs.”

But her study shows that strategy could backfire unless, they say, schools make credentials stackable. Nearly 40 percent of students who transfer between programs lose all of the credits they’ve earned.

That’s exactly how Washington’s community college have started to design their certificate programs in the years since the students Dadagr and Trimble were enrolled, according to Marty Brown, executive director, Washington State Board for Community and Technical Colleges.

“Today, 2-year colleges in Washington and most states offer short-term certificates that ‘stack’ on top of each other, like building blocks, to form longer certificates or degrees,” Brown said in a written statement. “Each level of skills serves as a foundation for the next level.”

With this system, Brown said, short-term certificates are important first steps into college and some, like those that train students to operate high-tech manufacturing equipment, do lead to increase wages on their own.

“For me the takeaway is not that short-term certificates should not be offered,” said Madeline Trimble, the study’s second author and a researcher at the Columbia University Community College Research Center. “But rather that colleges should be very conscious when designing program offerings of alignment with local labor market opportunities. Not is it short- or long-term, but is it a certificate that leads to a job or pathway that’s beneficial for students.”

Editor’s Note: This post has been amended to include the response of the Washington State Board for Community and Technical Colleges.

Left: A new study found that certificate programs that take less than a year do not boost students' earnings. Photo by Flickr user yusunkwon