Yes, Malachi Zeitner has heard the joking references to Caddyshack, the comedy cult film with Chevy Chase and Rodney Dangerfield about a kid from the wrong side of the tracks who more or less blackmails his way into a college scholarship from the country club where he caddies.

Zeitner doesn’t mind. Raised by his grandparents in Sioux City, Iowa, after his mother left and his father died, he’s enjoying a full ride to Miami University of Ohio on his way to dental school, thanks to a real-life scholarship he got for caddying at a golf club in the summers.

The Chick Evans Scholarship of the Western Golf Association, named for a onetime caddie who became the first man to win the U.S. Open and U.S. Amateur golf tournaments in the same year, covers the full tuition and housing costs of 850 caddies nationwide who have financial need and earn good grades.

It’s part of an estimated $16.1 billion in college scholarships made available by golf associations, Rotary Clubs, businesses and other private sources, according to the College Board—an amount almost twice as high as all the college grant money given by the 50 states combined. Among students who receive a private scholarship, the average award is $3,400, the U.S. Department of Education reports.

But what Caddyshack groundskeeper Carl Spackler might call Zeitner’s “Cinderella story, outta nowhere” is less common than you might expect.

That’s because federal data show that poor families that need the private scholarships the most are less likely to get them than higher-income ones.

Related: How the class divide is widened by gaps in counseling kids for college

“The same patterns of inequity are repeating themselves,” said Amy Weinstein, executive director of the National Scholarship Providers Association. “We have major inequity issues—who’s in the club, who gets the information.”

Related: Colleges that pledged to help poor families have been doing the opposite 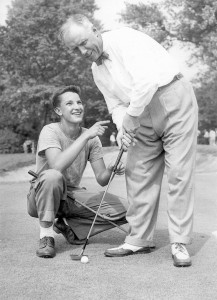 While two-thirds of parents with incomes of $75,000 or more could name scholarships as potential sources of financial aid, only one in four with incomes under $25,000 a year could, according to a survey by the Harris polling company for the loan company Sallie Mae; white parents were also more likely than black or Hispanic parents to know about them. Conducted in 2003, the most recent year in which these questions were asked, the survey found “vast inequalities” in knowledge about financial aid based on race and income.

Joe Schmidt sees that disparity in his roles as both a director of the Western Golf Association, which awards the Chick Evans scholarships, and president of St. Patrick High School in Chicago. High-achieving low-income students in large nearby public magnet schools, Schmidt said, don’t get as much private scholarship money as the graduates of his Catholic school, which has an enrollment of 700.

“What tells me that they don’t get the information is that their scholarship awards are far less than at the private schools that have far fewer students and seem to be more aware that that money is out there,” Schmidt said.

The NACAC survey found that private school counselors spend much more time providing information about scholarships than their counterparts at public schools with larger proportions of students who need the money.

Low-income and first-generation students at those schools, in particular, “are not knowledgeable enough about what’s available for them,” the results suggest, said Nicole Ifill, an analyst at the education research firm RTI International who co-authored the NACAC report.

A single college counselor in a public high school handles 471 students, on average, according to the American School Counselor Association, nearly double the caseload the association recommends, and almost five times the ratio in private schools. In the same survey, private school counselors said they spent much more time than public school ones providing information about scholarships.

Related: The financial aid policy that shuts out millions

“Families with experience going to college, they would know how to find that money,” said Max Espinoza, senior vice president at Scholarship America, a nonprofit organization that supports private scholarships. “First-generation students don’t always know it’s out there.”

As for Zeitner, he learned about the caddie scholarship from an uncle who’s a golf pro. But he has seen classmates who seemed not to know that private scholarships existed, or how to get one.

“You have to put yourself out there and say, ‘Hey, I’m a worthy candidate,’” he said.

Because they come from so many sources, there’s been little comprehensive research into private scholarships. The Department of Education breakdown of the number of private scholarship recipients by income isn’t actually published anywhere; it was calculated at the request of The Hechinger Report.

But private scholarships have grown to represent 13 percent of all direct grants given to American college students, the College Board says.

“Private aid helps students who slip through the cracks of other aid programs,” Espinoza said. “It can really make a difference. There is money out there.”