If not for their young faces, the eleven high school students wearing blue doctor’s-style coats and intense expressions might be mistaken for professionals as they watch Ashanti Boykin use a relatively life-like mannequin to give a detailed explanation about what happens when a woman gives birth.

Boykin is an Emergency Medical Technician and instructor at Fast Response, a health care education school in Berkeley, California. She talked about proper techniques for caring for a woman in labor with students from Oakland’s Life Academy school, and a group of adult EMT’s-in-training.

“Never judge what’s going on with your patient by the amount of noise or lack of noise because some women are very vocal and other women are not so vocal,” Boykin tells the group.

Some students may find such a realistic simulation cause for nervous laughter, but Jorge Ruiz, 17, and his classmates are serious, listening and watching closely as Boykin and a colleague push a plastic infant through the mannequin’s “birth canal” and out onto a gurney.

“They may be mannequins but they teach you real life lessons.” said Ruiz who is a senior at Life Academy, a health sciences-focused public school in neighboring Oakland. “You don’t only learn about giving birth to life but… how to be supportive. We’re all human and this is just part of the life experience.”

Ruiz and his classmates visited Fast Response, as part of their two-and-a-half-year internship with Community Health and Adolescent Mentoring Program for Success (CHAMP’s) program at the University of California San Francisco Beinoff Children’s Hospital Oakland. CHAMPS was created to give underserved minority students an opportunity to learn about a variety of careers related to health care, and provide academic support to prepare them for college.

As it happens though, Ruiz is already a seasoned healthcare provider. He assists his mother in seeing to the needs of his two sisters who have cerebral palsy. One suffers from a particularly severe form of the disease.

“Liliana has cerebral palsy quadriplegia which also comes along with asthma, scoliosis, epilepsy. She feeds through a G [gastronomy] tube,” said Ruiz. “So I’ve always kind of been surrounded by some type of health issue where in my family.”

Playing a large role in caring for his sisters led Ruiz to consider a career in health care and he has already rotated through several departments at the hospital.

In addition to learning about a variety of hospital jobs, Ruiz also has classes at school to learn practical skills, including how to conduct physical exams and how to take vital signs. 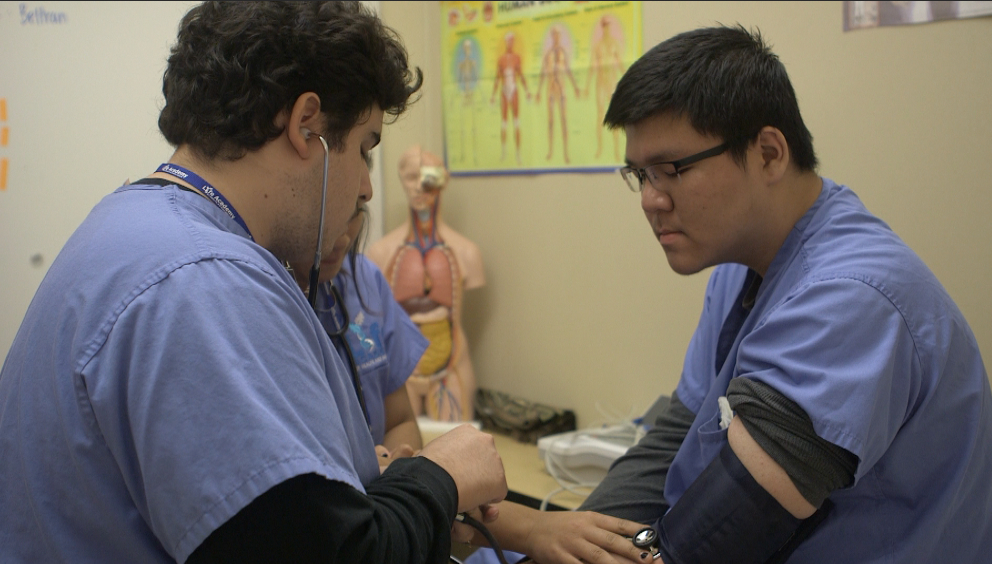 Sometimes though, the realities of life and death intersect at Life Academy.

“When teachers say ‘how many of you have friends who were shot or family members,’ and you see 95 percent of the room raise their hands … you know this is a real situation in this city,” Ruiz said.

At least six Life Academy students have died violently since 2005, including Alejandro Aguilera, 18, who was shot and killed in 2012 while standing outside an East Oakland Market.

“His loss was so painful because it was so random … and he was such a success story at Life Academy,” said Annie Hatch, who teaches Humanities and college preparedness classes at the school. 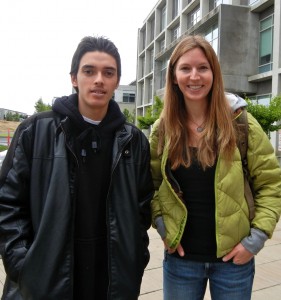 “He had actually been involved in gang activity and had been shot before he came to Life Academy and he’d sort of turned his entire life around,” she said.

In recent weeks grave conversations at Life Academy and several other Oakland schools have been sparked by deaths that have happened more than a thousand miles away.

Deep discussions about race and policing are taking place in the wake of the shooting death of unarmed teenager Michael Brown by the later un-indicted police officer Darren Wilson in Ferguson, Missouri, and the death of Eric Garner on Staten Island after a confrontation with authorities and lack of an indictment in that case.

Repeated protests against police brutality have taken place in Oakland and nearby Berkeley, some of them violent.

“The Ferguson thing is no surprise to our students, they are [saying] ‘yep that’s the way it goes’,” said Suneal Kolluri, Life Academy’s Government teacher. “[That] feels like the kind of mentality that our students have about it because they’ve seen it. Their own fellow classmates have actually been physically accosted by the police. The Oscar Grant thing happened where a young man was shot and killed in the back unarmed while an officer was on his back.”

In 2001 protesters marched the streets of Oakland and Berkeley and held die-ins following Grant’s death. The father and butcher’s apprentice, who was 22, was killed on a train platform by transit officer Johannes Mehserle, who was eventually found guilty of involuntary manslaughter.

The circumstances surrounding Grant’s death were the basis as the film “Fruitvale Station,” and his case was specifically mentioned by Jesse Jackson in a visit to Oakland’s Emiliano Zapata Street Academy in December. 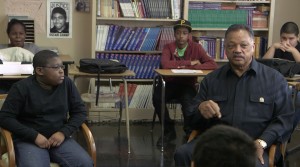 Lamar Miller, 14, takes part in a discussion with Jesse Jackson on civil rights at Emiliano Zapata Street Academy in Oakland, California. A poster of Oscar Grant, the unarmed man killed by a transit officer on a train platform in Oakland in 2009, is on the wall behind Miller. Photo by Jake Schoneker for the PBS NewsHour

“It could very well be that Ferguson is part of a long train of abuses that have come to a head,” Jackson told more than a dozen students at the alternative high school, in a room where a black and white poster reading ‘Justice for Oscar Grant’ had been tacked to the wall. The group sat around a memorial to students from Street Academy who were victims of gun violence, including Samantha Alvarado, 15, who died in June.

English and History teacher Maya Semans invited Jackson to speak with her students about his experiences fighting injustice as the class covered the subject of revolutions.

“This does provide an opportunity to have a pretty amazing discussion — an inter-generational discussion because we have one of the leaders of the Civil Rights Movement in our presence,” said Semans. “And you are part of a generation starting a new movement for racial justice and it might look very different.”

“We’re always looked at and targeted by the police more often than others,” said Tyheir Bolden who also sat in the circle. “It made me feel like we have to stand up for ourselves.”

“My Ferguson moment would have to be when the police broke into my cousin’s home,” said Lamar Miller, 14, as he sat next to Jackson. “She had a weapon on her because she thought there was an intruder and they broke into her home and they saw the weapon and they killed her on the spot.” 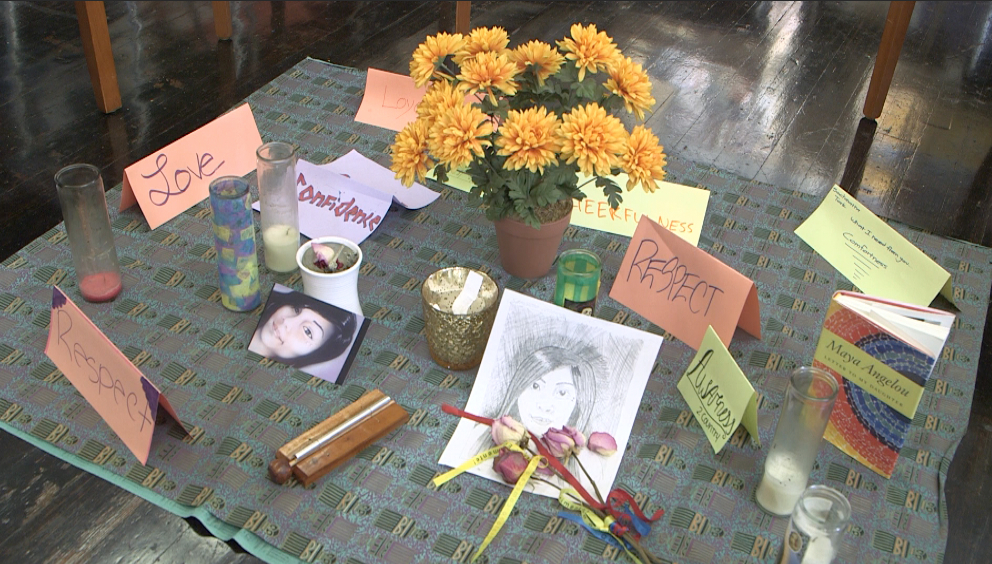 A memorial at the Emiliano Zapata Street Academy in Oakland, California, to student Samantha Alvarado, 15, a victim of gun violence who died in June 2014. Photo by Mike Fritz/PBS NewsHour

Several of the students had participated in some of the rallies that had taken place in Oakland and Berkeley, but there are varying views at this school as to whether the protests are effective.

“If we really get out there and start protesting … really demanding stuff we’ll be able to probably accomplish new things,” said Markos Alvarado, 16.

“I’ve lost my hope,” said Mikianna Thompson, 18. “If this is just me and I feel like this and if I got to go out there march, I know that I’m helping contribute to me saying ‘ok, I’m not going to stand for it no more.’ But it’s hard.”

The conversations around life and death continue at both schools. At the school that focuses on health and the students’ well-being, the name Life Academy may seem particularly appropriate.

“We do take you know an interest in students lives outside of Life,” said teacher Annie Hatch. “That’s a frequent joke we have: ‘how’s life going, this ‘life’ and your other life that you have.’ But they are obviously very much connected and we care about both of them.”

Jorge Ruiz, who has lived in the Oakland neighborhood near his school for most of his life, is focused on his future. He plans to stay close to home, and would like to attend the University of California Berkeley and possibly pursue a career in genetics.

He also likes to focus on the good things about his community.

“Oakland is my home town I appreciate it for what it has and what it has to offer not just through the lens of violence.” Ruiz said. “I live here and so I’m just going to keep it in a positive aspect.”

Left: Emergency Medical Technician Ashanti Boykin explains the realities of caring for a woman in labor as students from Oakland, California's Life Academy and EMT's-in-training look on. Photo by Mike Fritz/PBS NewsHour