A record number of kids now attend public preschool, so why has inequality grown?

Living in the rural mountain community of Salida, Colorado, Kate and Mike Madden were fortunate to have a lot of family support for child care when their two sons were infants. But as their boys enroll in early childhood programming this August, the family will be on a new schedule, both time-wise and financially.

“Our older son, who is on the autism spectrum, could really use full-day preschool for the continuity, transitions and executive functioning skills,” Kate Madden said of her child, who attends the school district’s Early Childhood Center preschool for free as outlined in his Individualized Education Plan (IEP). But because both parents work — Mike is a nurse and Kate is a science teacher — “we make too much to qualify for full-day Head Start,” she said.

“Because some states are moving so far ahead, your ZIP code matters way more than it did in 2000.”

While she was pregnant with her second son, Madden learned about a home-based education program for expectant mothers and children under age 3 that involved visits by a family liaison from the school district for about two years. Her son has since received a partially subsidized private-pay slot in the Early Head Start program.

The early learning programs and child care will cost the couple about $800 a month, an enormous increase from what they are currently paying. But it’s a more than worthwhile investment, Madden said.

A growing number of parents, business leaders and lawmakers are aware of the long-term benefits of high-quality, well-funded preschool, said Dr. W. Steven Barnett, director of the National Institute for Early Education Research, or NIEER. The group has provided yearly analysis by state of public pre-K in the U.S since 2002. 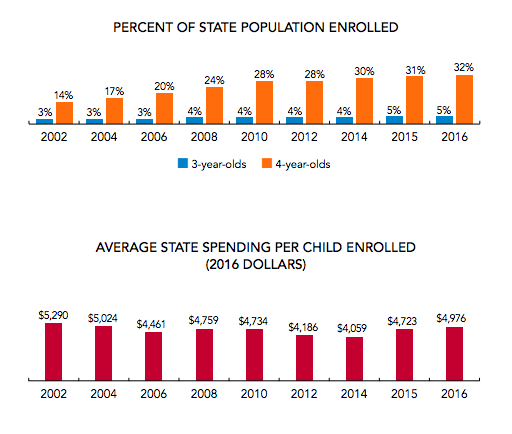 The chart is from the National Institute for Early Education Research, or NIERR’s, 2016 State of Preschool Year.

NIERR’s 2016 report was released on Wednesday, showing mixed results.. While a record number of states are providing public preschool, 43 plus Washington D.C. and Guam, inequality has grown over the last decade, as access to pre-K and the quality of the programs themselves vary significantly from state to state.

A total of 1.5 million children, including 32 percent of 4-year-olds and 5 percent of 3-year-olds, were enrolled in preschool this past year, according to the report. Several states are now offering or moving towards universal pre-K, which serve all kids regardless of income, including Oklahoma, Florida, Georgia, District of Columbia, New York, Iowa, West Virginia, Wisconsin and Maine.

Seven states provided no state-funded preschool programs and eight states continued to enroll fewer than 5 percent of 4-year-olds, according to the report.

“In essence, because some states are moving so far ahead, your ZIP code matters way more than it did in 2000,” said Barnett, adding that, “It’s good news for some children and bad news for others.”

The report found that some states like Florida and Arizona did little to provide for high-quality pre-K education this last year. Five states, including Rhode Island, Alabama, Mississippi, North Carolina and West Virginia, met all of NIERR’s quality standards (i.e. class size, teacher education), which is considered the minimum of what preschools need to be doing.

The map is from the National Institute for Early Education Research, or NIERR’s, 2016 State of Preschool Year.

Take Florida, for example, where universal pre-K was forced on the state legislature by ballot initiative, Barnett said. “The people of Florida wanted this enough to change their Constitution, but the Legislature has refused to put in quality standards and funds it at less than $2,400 per child.”

State spending per child averages about $5,000.

Twenty-four states, mostly Texas and California, have increased spending on public preschool. This 8 percent or $7.4 billion increase in state-funding demonstrates that a growing number of states have come to place a value on early learning, according to Dr. William Gormley, professor of public policy at Georgetown University.

“I also was intrigued to see a mix of red and blue states that emerge as the nation’s leaders in early childhood education,” said Gormley, who emphasized that such bipartisan support from the outset has been a source of strength for pre-K programs.

Several studies over the years have shown that in order for kids to see longer-term benefits into elementary school and beyond, pre-K programs must be of a high-quality, Gormley said. He noted that NIEER’s decision to revise their standards on quality was a sound move in this direction.

Alabama and Rhode Island were the only states to meet all 10 of the new quality standards, which in addition to teacher education and class size, include support for implementing curricula and professional development.

“People are finally understanding you can make such a difference in children’s lives if you start early.”

Ilona Witty, director of the Early Childhood Center in Salida, Colorado, said all of her programs follow Head Start’s stringent and comprehensive regulations and line up with NIERR’s new standards.

The Early Childhood Center, which serves students “1 and walking” through age 5, is part of the Salida School District, and receives funding from multiple federal and state sources, including Head Start, Colorado Preschool program, special education and private-pay.

The Center started with 33 kids and six employees and currently has 120 kids and 35 employees, said Witty. She attributes much of the success of Salida’s high-achieving school district to the quality of its Early Childhood Center.

“People are finally understanding you can make such a difference in children’s lives if you start early. They’ll grow into a lot better students and adults, if you have really good early childhood programs,” Witty said. “I think that gets bipartisan support. Now how you do that becomes political.”

Salida’s school district pays her teachers like professionals and provides them with the same benefits as district teachers, Witty said, which makes a big difference in how they’re able to work with kids. However, finding qualified staff who have early childhood experience and funding remain challenging, she said.

The National Institute for Early Education Research or NIERR’s 2016 State of Preschool Year.

“On one hand, the states have helped to revolutionize early childhood education in the United States and deserve a lot of credit for that,” Gormley said.

On the other hand, he says, the U.S. continues to underinvest in children, lagging far behind European nations. The federal government spends seven times as much money on senior citizens than it does on children, Gormley stated.

In 2015-2016, 18 states spent about $210 million in federal Preschool Development Grants designed to help implement high-quality preschool programs. Using the grant money, Rhode Island doubled the number of preschoolers in its state-funded programs and Tennessee’s Voluntary Pre-K program increased their enrollment by 90 percent, according to NIERR’s study.

In the Trump administration’s 2018 budget, which came out this week, it showed that Congress had already moved the Preschool Development Grants to the Department of Health and Human Services. And this past winter, Congress removed the Department of Education’s authority to promote specific quality standards under the new education law, Barnett said, two signs that show the Department’s role in supporting high-quality preschool is being undermined.

He said he understands the desire to limit mandates on state governments, but emphasized that a competitive grant program that offers incentives for local or state proposals to expand access to quality pre-K is a good idea.

“We lose the opportunity if we just invest in it as child care and don’t pay attention to education, because the big pay off really is that kids will be more successful in school. They’ll be more successful in life. They’ll be less likely to end up in jail,” Barnett said. “It’s not just that parents are going to work now, it’s the next 30, 40, 50 years of a child’s life.”

Quality pre-K is expensive, Witty said. But she recalled a time when it paid dividends: A 3-year-old girl who came to the Early Childhood Center didn’t have any language skills and couldn’t speak. Her doctor hadn’t caught the problem because she would nod and smile and everyone thought she was just being a complacent little girl.

Witty said she’s experienced many success stories in her 23-year career, but that little girl really stands out. “Now we are seeing her graduate with honors from high school,” Witty said, “This is a child we didn’t think would ever succeed in school.”

Left: A young student plays the xylophone at the Early Childhood Center in Salida, Colorado. The center is part of Salida's small rural school district and serves those ages 1 through 5. Photo courtesy of Salida Schools