Many U.S. teachers can’t afford to buy a house

Perhaps another salary-related grievance for teachers: Depending on where they live, buying a home can be far out of reach.

In a new report, the National Housing Conference, a nonprofit that advocates for affordable housing, analyzed 210 metro areas and whether workers in public education — from bus drivers to teachers — could afford to buy or rent a home. (The report did not account for a second income in the household.)

High school teachers had a median income of $56,882, making it possible for them to rent a two-bedroom home in 94 percent of the metro areas analyzed. One of the 12 metro areas where teachers cannot afford the typical rent is Honolulu—a factor in Hawaii’s recent teacher retention and recruitment struggles. 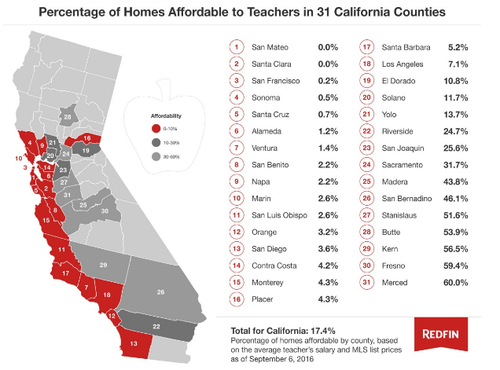 The average teacher salary in California is $73,536, making them only able to afford 17 percent of homes currently for sale in the state . (Infographic by Redfin via Education Week.)

However, high school teachers at the median salary could afford to own a median-priced house in just 62 percent of metro areas. For example, the report said, the income needed to buy a home in San Luis Obispo, California is more than twice that of the average high school teacher salary in that area.

In fact, a separate report from Redfin, a national real estate company, found that just 17 percent of California homes for sale are affordable on the state’s average teacher salary of $73,536. That amounts to 13 percentage point decline in affordable housing for teachers since 2012, the analysis said.

“A typical home in California costs more than half a million dollars—$200,000 more than the average teacher can afford,” Redfin chief economist Nela Richardson said in a statement. “Though California is a striking example, it’s not the only state with this issue. Due to the yawning gap between incomes and home prices in communities across the country, our public servants can’t afford to live in the communities they serve.”

To help with recruitment and retention, some districts have implemented housing incentives for teachers, like subsidized housing or loan assistance. A California bill that would allow school districts to lease property for the development of housing for teachers and other district employees is on the governor’s desk. It has been championed by the San Francisco school district. And a few months ago, the Washington Post reported that a nonprofit managed by the Charter School Incubator Initiative is building subsidized housing for teachers in Washington, D.C.

In the latest issue of Education Week, Brenda Iasevoli reported on a Newark, New Jersey apartment complex called Teachers Village. The apartments, which are open to all public school teachers, have reduced rent and are attached to three new charter schools. While teachers’ unions are concerned with the ties to charter schools, teachers who live there praise the affordability and the convenience of the location.

Left: The National Housing Conference analyzed 210 metro areas to see whether workers in public education could afford to buy or rent a home. Photo by Rayman via Getty Images