Why it’s hard to unplug, even in Amish country

Let’s be honest. Chain hotels are usually the home away from home for reporters on the road. The TV, wi-fi and room service make a long day a little easier.  But for a recent trip to Ohio’s countryside, I canceled the hotel reservations for myself and my colleague Mike Fritz, opting instead for an Amish-run bed and breakfast in Berlin, Ohio.

The area around Berlin (which apparently is pronounced both BURR-lin and Burr-LIN — the latter like the capital of Germany) bills itself as “the world’s largest Amish community.” And although most Amish people don’t have electricity in their homes, some have permission to use it in their businesses. With a 6 p.m. sunset and temperature dipping well below zero, we were grateful for light and heat.

But as a creature of technology, and as someone who has found it hard to live in silence since I started working in newsrooms, where police and fire scanners produce constant background noise, it is odd sitting a house that is not wired. The front window of the B&B faced one of the main streets. From there, we heard cars passing, and every five or 10 minutes the clip-clopping of horses hooves. There was an old TV/VHS/DVD combo in the far corner of the living room, complete with Ben Hur as a viewing option. But I didn’t even think about turning it on. 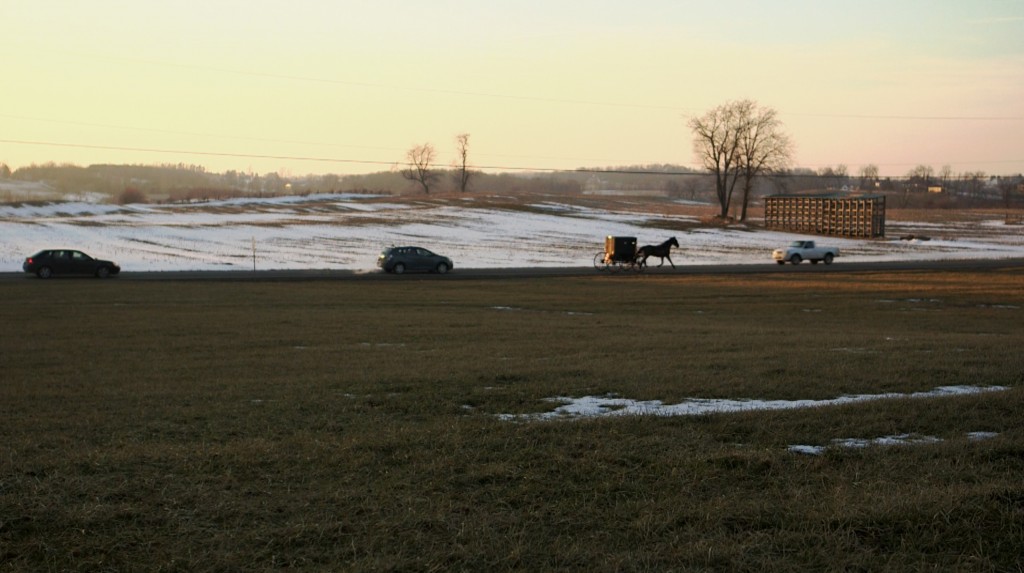 Amish buggy on the road near Berlin, Ohio. Photo by Mike Fritz/PBS NewsHour

During our trip, Mike and I had a lot of conversations about technology with residents of this area. The education story we came to report involved Amish students using technology in the classroom. But to varying degrees, technology is also seeping into the daily lives of many Amish families, too.

One mother — who we’ll call Sarah — asked that we not identify her because members of her church would likely not approve of conversations with the media. Sarah and her family follow many Amish traditions: no electricity in the home, simple home-sewn clothes, and homegrown food.

“We build our own houses with friends,” Sarah said. “Women help each other for a day to clean or whatever needs to be done with canning. We do a lot of canning.

“That’s how we were brought up and we never knew anything else,” she said. “I just never wanted for more, and I know if we had more modern things I would spend a lot more money than I do and get things I don’t really need. I’d probably be using the technology instead of getting my work done like I should.”

But the family has a phone in an outbuilding, and uses batteries to power some household items including a washing machine. They have an oven, stove and lamps powered by natural gas, and occasionally, they ride on busses and trains.

“Change in the Amish culture is always brought about, not individually, but corporately, so it is slow to change,” said Jerry Schlabach. He is Amish, born and raised in the area around Berlin.

But in some ways Schlabach has changed with the times more than many other Amish. Even though he left traditional school after 8th grade, he earned a GED and is the librarian and German teacher at Mt. Hope Elementary in nearby Mt. Hope, Ohio. Schlabach has also traveled around the world, flies on airplanes and has a cellphone — all things many people in his community wouldn’t even consider.

“It’s a big difference from flying in a jet in the morning and being in your horse and buggy in the afternoon, but it’s happened already,” said Schlabach. “But I’m always happy to come back to that, and I have not, at this point, found anything that I would rather do.”

“There are things to learn, there are interesting things to see, but nothing that I think really enhances what we have here.”

Which brings us back to the Amish bed and breakfast on a relatively quiet street in Berlin. Strictly speaking it wasn’t too quiet for too long. We brought a wi-fi hub, each of us had a laptop, and I’d brought a tablet, too, loaded with TV shows and movies. After a long day, the two of us were tapping away at our computers in relative silence, catching up on email and what we missed while out and about. Then the silence was broken.

“Do you mind if I play some music?” Mike asked.