For science educators, the stakes for teaching the next generation feel higher than ever

When he was a young boy, science teacher Paul Reyna would run inside to watch “Mutual of Omaha’s Wild Kingdom” when he’d hear his mother yell, “It’s coming on!” Reyna now credits her with his love of science.

“It was one of the very first nature TV shows, and my mom would point out, ‘Oh, there’s a squirrel in the tree, or there’s a bluebird,’” he said.

“I never dreamed I was going to become a teacher. I was going to go into the military,” said Reyna, a sixth grade science teacher at Schrade Middle School in Rowlett, Texas, a suburb of Dallas.

READ MORE: Bill Nye on his ‘codebreaker’ mom and how science teachers can change the world

Reyna, now in his 28th year as a teacher, was among the many attendees of this year’s national conference of the National Science Teacher Association (NSTA), the world’s largest professional organization representing science educators of all grade levels, according to the group’s website.

Briana Harry, who is in her third year as a biology teacher in Dallas’ L.G. Pinkston High School, a Title I school based on its high number of students from low-income families, also attended the NSTA conference. At the end of her first year, Harry said she knew she had made the right decision to become a teacher after helping her students pass the state biology exam — for many, it was the first state science exam they had passed. 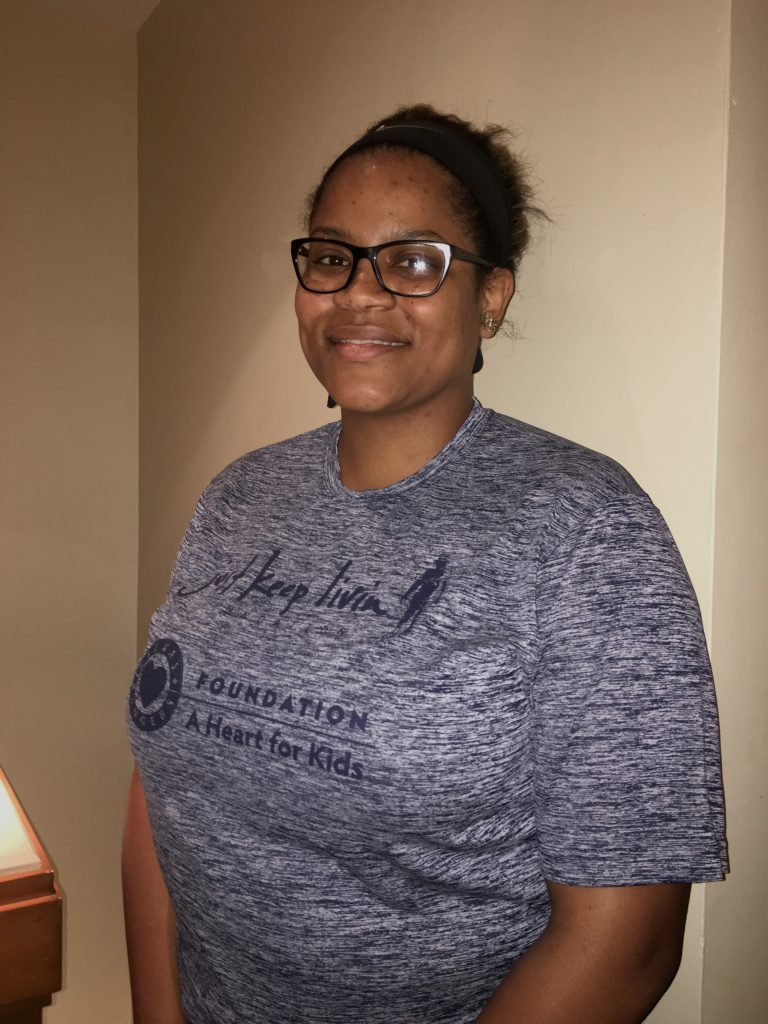 Briana Harry, who teaches 9th and 10th grade biology at L.G. Pinkston High School in Dallas, Texas, said professional development is vital to her growth as a teacher, especially for her special needs students. Photo by Victoria Pasquantonio

“You impact so many lives and they really don’t know you are doing it,” Harry said.

Reyna and Harry both credit their families with their decision to become science educators, but the two Texans say that it’s professional development, like the NSTA’s conference, that has been key to their success.

The four-day conference, which drew 10,000 K-12 science educators and 400 exhibitors to the Los Angeles Convention Center, offers hundreds of content- and age-specific workshops, a large majority of which are contributed by teachers, according to NSTA’s executive director David Evans.

“They get to see what other teachers are actually doing,” said Evans. “There’s no one that has more credibility than someone who’s doing the same job you are.”

Workshops included “science behind bubbles” for elementary school classes, how to introduce biotechnology in middle school and how to maintain safe and sustainable labs that meet the Next Generation Science Standards (NGSS), the new science standards that 18 states and the District of Columbia have adopted so far.

Harry said her professional development is vital to many of the special education students she works with. “They need those hands-on activities that I can’t just Google.”

“There’s no one that has more credibility than someone who’s doing the same job you are.”

Science teachers like Harry play an especially critical role right now, according to Evans. The Trump administration has sought cuts to or the elimination of federal science or research programs. Recently a political group skeptical of climate change sent promotional materials to thousands of educators, encouraging them to debate the scientific consensus.

Evans worries that many Americans are losing sight of the close link that exists between societies that embrace science and democratic governments. He points to Thomas Jefferson who set up the first scientific agency in the government, the Survey of the Coast, which remains part of the National Oceanic and Atmospheric Association’s (NOAA) mapping system.

A major exception to the current tide, Evans said, is the work he sees teachers doing and the opportunities, like the NSTA’s conference, to strengthen and empower instruction.

Harry said she wanted to focus on technology the first day of the conference. She learned about an app called EdPuzzle that allows teachers to add questions to YouTube videos that help make the exercise more interactive.

Reyna said teaching has to be more engaging for students, especially with fierce competition from social media and smartphones. He came to the conference representing Educational Innovations, a company that sells a variety of hands-on science products, like balloon helicopters and fossil-sorting kits, in order to make science more fun.

“If you want incredible schools for every single kid in America, and I don’t care where the source of that education is coming from, whether it’s private or public, educators absolutely need professional learning.”

After sharing his own version of a rocket at a Texas state conference some years before with the company’s president, Educational Innovations ended up producing and selling Reyna’s rocket, which he tests out with teachers throughout the day.

“The fact that they stop by and say, ‘Wow, this is good. I did something kind of like that, but this is better,’ makes me feel like I made a difference,” Reyna said.

Reyna said he was fortunate that the company took care of the costs of the conference, while Harry also said she was grateful that her school district paid for her and her colleagues to attend. But a lot of teachers, because of tight district budgets, pay their own way — including hotel, registration and airfare — said Evans.

The budget recently proposed by the Trump administration for the 2018 fiscal year (the 2018-2019 school year) would eliminate the Title II program that allocates more than half of its $2.3 billion budget for professional development for teachers and principals, many of whom teach in high poverty areas.

Education advocates have been on Capitol Hill over the last week to discuss putting Title II back into the budget, according to Deborah Delisle, executive director of ASCD, a professional development and education leadership organization.

The administration has argued that the monies should go to “education programs that work,” according to a statement by Education Secretary Betsy DeVos, without making an references to Title II specifically.

In the last few years, there has been criticism of professional development programs, particularly the one-size fits all workshop model, for not improving student achievement.

While Delisle said some of this criticism is valid, professional development that provides teachers with content-specific and in-depth learning opportunities is invaluable. She called the cuts to Title II “short-sighted.”

“If you want incredible schools for every single kid in America, and I don’t care where the source of that education is coming from, whether it’s private or public, educators absolutely need professional learning,” Delisle said. “Otherwise you are going to be teaching like we did 20 years ago. You’re going to be teaching for kids’ past or present, not for their future.”

Or, another way of putting it, in the words of Andy Weir, the author of “The Martian” and keynote speaker at the NSTA conference: “STEM, STEM, STEM!,” which is an acronym for science, technology, engineering and math. 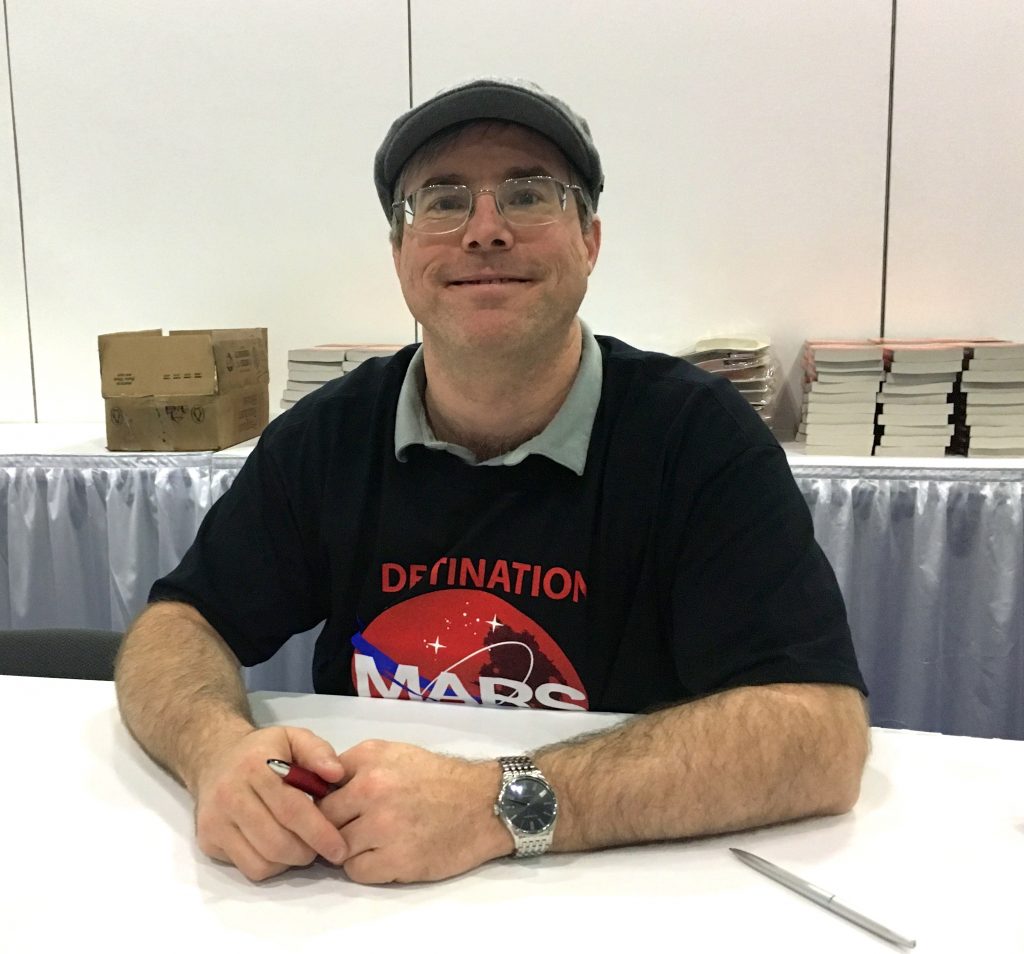 Andy Weir at the National Science Teachers Association conference in Los Angeles after delivering his keynote address. Many teachers have used Weir’s book in their classroom to teach about space exploration. Photo by Victoria Pasquantonio

“We are limited in the number of people in our society figuring out new scientific advancements,” Weir told PBS NewsHour after his address. “Not by the scientific capability of the machinery and material necessary to do it. We are limited by the brains.”

While Weir recognized that attendees of NSTA are likely already in a STEM frame of mind, he emphasized the critical role parents play in their children’s learning and urged schools to make parents aware of the financial incentives for encouraging their kids to go into STEM.

“The parents are the most important thing,” Weir said. “As I am sure is frustrating to teachers all over the world, you have to get the parents involved.”

Harry, who often has to step in to play a parental role to her students, encourages kids to go into the STEM fields. At the end of the school year, Harry assigns a project that involves students researching different STEM careers. She said a light bulb will go off when they learn about professions they never knew existed.

She particularly wants to reach girls and students of color, and recognizes the importance of her students seeing a teacher who looks like them.

“We are limited in the number of people in our society figuring out new scientific advancements. Not by the scientific capability of the machinery and material necessary to do it. We are limited by the brains.”

The desire to learn more about how to bring underrepresented groups — including minorities, poor students, students with disabilities and girls — into STEM is also what brought Kelly Gooden, a fifth grade teacher and science leader in her school in Las Vegas, to the NSTA conference.

“We are telling them in sometimes subtle, sometimes not subtle ways, that science is not for you,” Gooden said. “So, ‘The boys are going to do this,’ or, things that are icky to touch, we let the girls sit back and not touch them. And I’m like, ‘No, we are all dissecting frogs today. There’s no eww in science.’”

Originally a humanities elementary school teacher, Gooden went to her first NSTA conference more than 20 years ago, where she picked up a forensics crime scene game for her students. It was such a hit that she was asked to do more science lessons and ended up getting her PhD in science education. 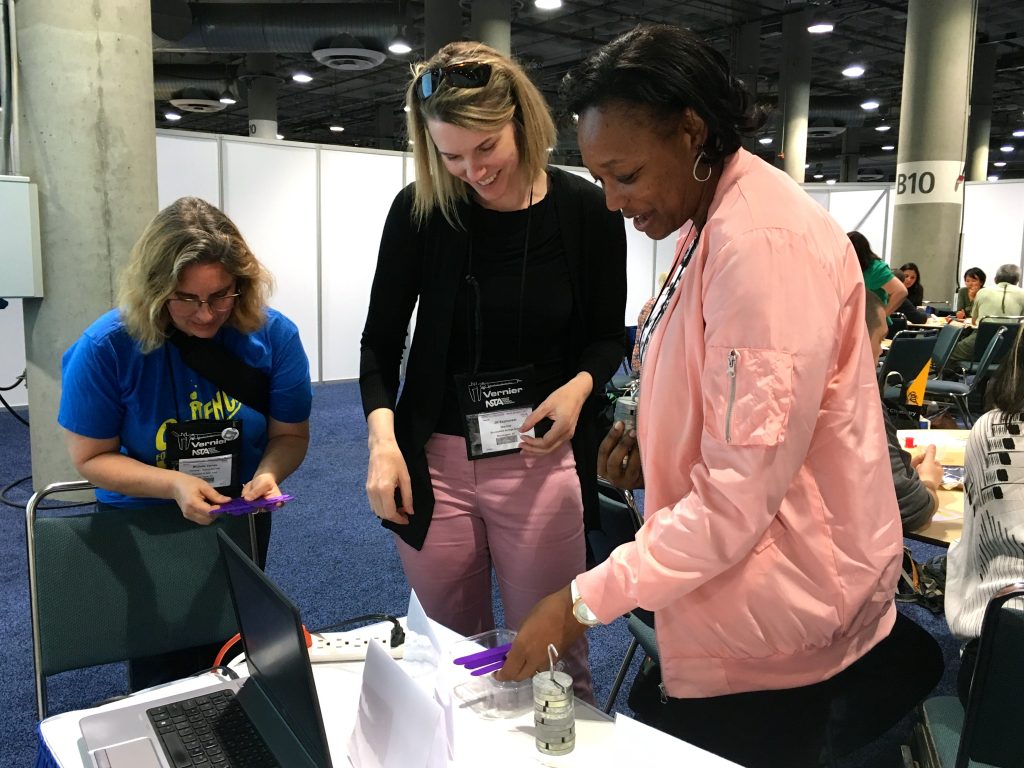 Science teachers Michelle Varnau, Kelly Gooden and Jill Szymanski take part in a workshop for grades 3-6 at the National Science Teachers Association in Los Angeles. The objective was to design a shelter to keep two tiny teddy bears safe from storms and other challenges. Photo by Victoria Pasquantonio

But, while many of the students Gooden refers to have long been left out of the push to take STEM classes and go into STEM fields, things are starting to move in the right direction, Evans said, pointing to the conference’s many workshops on inclusion and diversity, and crediting outside-of-school programs like robotics for raising kids’ interest in science.

“I push a lot of physics, especially with the girls,” said Reyna. “And girls are just as good as the boys. They just need to be turned onto it.”

Reyna, who has won multiple district teaching awards and was a 2007 Texas Teacher of the Year finalist, said he’s proud of his profession.

“Teachers, unfortunately, are not necessarily seen in high regard as a lawyer or doctor or a politician,” he said. “We’re kind of like the ones that get in the way. But yet, we build the foundation, the building blocks of what’s going to make our country great. To not support that doesn’t make sense.”

Left: Paul Reyna, in his 28th year teaching science at Schrade Middle School in Rowlett, Texas, shows another teacher a video of his students testing a rocket he invented at the National Science Teachers Association's conference in Los Angeles. Photo by Victoria Pasquantonio