Should undocumented students be allowed to pay in-state tuition?

Cynthia Cruz is an undocumented immigrant. She’s a Mexican citizen living in the United States.

According to Cruz, New Jersey is home, because it’s where her parents brought her from Mexico when she was a baby.

After high school, Cruz went to a local community college, and then last fall to Rutgers, New Jersey’s flagship public university. Her goal was a degree in public policy, but after only one semester on campus, she had to drop out because she ran out of money.

As an undocumented immigrant, she couldn’t get financial aid from the state, and she had to pay higher tuition than other New Jersey residents. 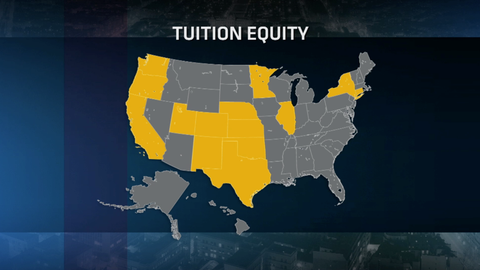 This map shows where tuition equity laws are currently on the books.

If you’re a resident of the state of New Jersey, the tuition and fees for one year as a full-time undergraduate at Rutgers is just over $13,000. If you’re not a resident, tuition will cost almost twice as much — nearly $28,000.

And that’s the amount that students who are undocumented immigrants have to pay, even if they’ve lived the vast majority of their lives in the state of the New Jersey.

Students like Cruz support a bill in the state legislature that would allow them to pay the in-state rate.

The idea is called tuition equity — a law currently on the books in 14 states. But critics of the legislation say in-state tuition is a privilege that should be reserved only for U.S. citizens.

Related: In this web exclusive interview with correspondent Rick Karr, 21-year-old Hugo Nicolas shares his story of pursuing higher education in the United States without a social security number.