NASHVILLE, Tenn. — When Paul Kline was applying to college last fall, he found himself in an enviable position: He didn’t have to worry about financial aid. The 17-year-old could count on support from a generous, wealthy grandmother and knew his tuition would be covered.

Nonetheless, he earned several scholarships from the University of Tennessee at Knoxville worth more than $18,000 per year. On top of that, he received $3,500 from HOPE, Tennessee’s merit-based scholarship.

Even as 19 states reduced the total amount of financial aid they awarded between 2008 and 2013, Kline is among hundreds of thousands of U.S. students from well-off families awarded public dollars in the form of merit-based state scholarships — all based on grades and test scores, not on whether or not they need the money.

Twelve states plus Washington D.C. now spend more on merit-based aid than need-based aid, and many others have increased funding for scholarships based on academic achievement instead of need. Some states have cut financial aid for everybody, leaving hundreds of thousands of eligible low-income students without help simply because the states’ money ran out.

“I always knew that if all else failed, if I wanted to go to college really bad and I still had to pay $60,000 out of pocket, I could,” said Kline, a lanky Nashville native with dark blond hair. “I know that for me the HOPE scholarship was almost negligible because of all the other merit-based stuff I got from UTK.”

Hunters Lane High School in Nashville, where Kline graduated in May, provides a microcosm of how the system works — and who benefits.

Who does merit aid help?

Studies have shown that merit-based programs disproportionately benefit middle- and upper-income students and have little impact on college graduation rates. And that’s one reason that researchers, academics and advocates who try to help low-income students get to and through college believe such programs are unfair.

“It’s a huge waste of billions of dollars nationally,” said Donald Heller, dean of the Michigan State University College of Education, whose research focuses on college access. “If the goal in the state is to increase the number of people getting college degrees, it doesn’t do any good to subsidize students who are going to go to college anyways.”

At Hunters Lane, only 33 students, or 13 percent of the senior class, qualified for the merit-based HOPE scholarship last year. The 1,600-student school, where 79 percent are eligible for free or reduced-price lunch, follows the same pattern as other Nashville high schools: The higher the percentage of low-income students, the lower the percentage who qualify for HOPE (see graph).

Courtaijaha Brooks-James graduated from Hunters Lane alongside Kline this spring, and was among the low-income students who didn’t make the HOPE cut. Last fall, she worked at the Hardee’s near her family’s home after school from 2 p.m. to 10 p.m., and sometimes later. Since the school day started at 7 a.m., she did homework on weekends, during work breaks and sometimes during class.

“I did so good. Everybody was proud of me,” said the fiercely independent young woman with an easy smile, who will turn 18 in August. “I got mostly A’s and B’s.”

Her recent good grades weren’t enough, though. Brooks-James’s standardized test scores fell just below the cutoff for the HOPE scholarship, which could have provided $16,000 toward the cost of her degree. Without the required test scores, she needed a 3.0 grade-point average for all four years in high school to qualify, but her spotty performance when she was younger brought her average down. 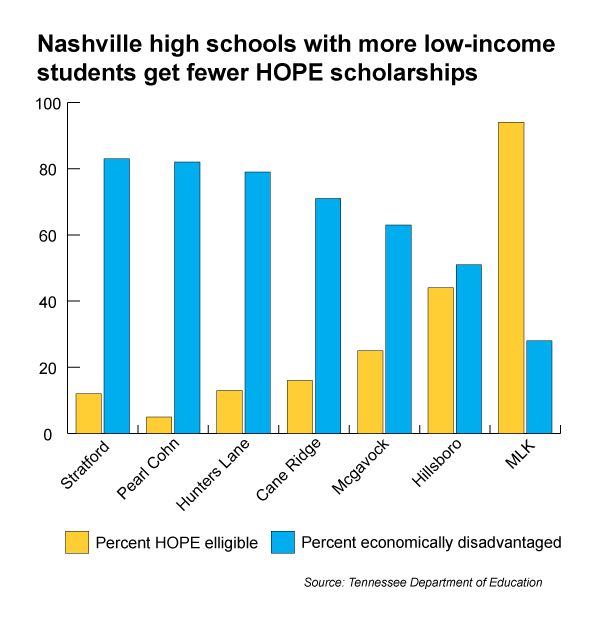 States that devote significant funding to merit-based scholarships are often aiming to keep bright students in state, hoping to stem a brain drain. Yet last year, at least 10 states that offer need-based programs ran out of money before everyone who was eligible got grants, while the merit-based scholarships in most of those states were fully funded. As a result, hundreds of thousands of eligible low-income students were denied state tuition assistance, according to a review of state grant programs by The Hechinger Report.

Some 120,000 eligible students who applied for Tennessee State Aid were denied last year after funding dried up and the state legislature’s allocation of $61.4 million fell far short of demand. Tennessee spent three times more money on non-need-based aid than need-based scholarships last year. As a result, some educators question the state’s funding priorities.

“Are we okay giving money to kids who are already going to go to college, or do we really want to make college change the trajectory of a kid who wouldn’t have had that in his life?” asked Tom Ward, president and CEO of Oasis, a nonprofit youth advocacy group that helped advise Brooks-James on every aspect of her application, from essays to financial aid. Ward worked as a teacher and principal in Nashville’s public schools for more than 30 years.

About a third of students who get Tennessee’s largest merit-based scholarships have family incomes above $96,000, more than twice the state’s median income.

Tennessee officials said that they were monitoring the spending balance between the need- and merit-based aid programs.

“It’s something we’re evaluating on a year-to-year basis, and we’ll continue to do so,” said David Smith, press secretary for Gov. Bill Haslam.

Like other states, Tennessee funds its merit-based scholarships using proceeds from the state lottery. But this practice too has been criticized as moving dollars from low-income communities into wealthier ones, as a disproportionate amount of lottery money comes from the poor.

Georgia eliminated all of its need-based tuition aid in 2012, even as public four-year tuition rose by more than 66 percent between 2007-08 and 2013-14, according to a report by the Center on Budget and Policy Priorities, a nonpartisan research and policy institute. The vast majority of Georgia’s aid program, also known as HOPE, comes from lottery proceeds.

The state doesn’t keep data on the family income of recipients, but a recent study by the Georgia Budget & Policy Institute showed that poorer counties spend more on lottery tickets and get less from HOPE.

Georgia state officials defend the decision to keep HOPE a solely merit-based program. “Gov. [Nathan] Deal believes HOPE scholarship should be awarded on the basis of merit because it helps keep Georgia’s best and brightest students in the state,” said Jen Talaber, a spokesperson for Deal, in an email. “In turn, graduates of Georgia schools are more likely to begin their careers here, which is good for the state’s economy as a whole.”

“People ask, how come there’s more inequality in higher education?” said Sara Goldrick-Rab, professor of educational policy studies and sociology at the University of Wisconsin–Madison. “Well, it’s because of policies like these that transfer of wealth is happening.”

Unlike in Kline’s family, neither of Brooks-James’s parents have a college degree. Her mom got pregnant at 17 and dropped out of high school. Brooks-James said her dad fathered his first child at age 13 and didn’t finish high school either; by the time she was born, he had three other children and was doing time in prison.

Her mom eventually got her G.E.D. and found work as a home health aide in Clarksville, Tennessee, where the two of them moved when Brooks-James was 4 years old. In elementary school, she showed early academic promise, but her mom pulled her out of the local school at the end of fourth grade after their apartment was broken into.

Still, Brooks-James was accepted into several four-year colleges and was planning on going to one of the state’s cheapest — East Tennessee State University. Her family’s near-poverty income qualified her for the maximum federal aid of $5,775, but the $6,775 in government grants for which she’s eligible would only have made a small dent in the estimated $23,000 annual cost of attendance.

Instead, she’ll attend Volunteer State Community College, just 20 minutes from home. It’s cheap enough that her federal aid will more than pay for the estimated $5,000 cost of tuition, books and supplies. Brooks-James will also keep her fast-food restaurant job and help take care of her new sibling. She is still determined to become a social worker and plans to transfer to a four-year college, but faces stiff odds. While about 45 percent of female students graduate within six years at East Tennessee State, only 17 percent — and only three percent of African Americans — graduate in three years from Volunteer State.

In the end, Brooks-James won’t have the scholarship she had hoped for, but her mentors at Oasis will still give her their full backing and support as she begins college — even though they had hoped she would choose East Tennessee.

“It does matter where she goes,” said Lee Gray, Oasis’s college connection manager. “Everything after that decision looks different.”