“The jobs are there, and we’re not preparing our kids well enough to get into those jobs because the system has not allowed us to,” said Stephen Jones, the superintendent of schools in Little Falls, Minnesota. His district hasn’t had to cancel any courses for lack of instructors, but he says smaller districts in the state have.

Nationally, career and technical education (CTE) isn’t the area with the worst teacher shortage — that’s special education. But two-thirds of states are currently reporting a shortage of CTE teachers in at least one specialty, according to a Stateline analysis of federal data. Many states, such as Minnesota and South Dakota, have had a shortage of CTE teachers for a decade. Some states, such as Maine, Maryland and New York, have had a shortage for almost 20 years.

To address the problem, legislators in Minnesota and other states have pursued changes to teacher licensing that would make it easier for people who work in industry to transition into teaching, or to teach part-time.

But there are many other reasons for the shortage that are harder to tackle: Teacher salaries are too low to compete with salaries in technical fields. Too few young people are specializing in career and technical education in college. And it’s hard to attract teachers to isolated schools in rural areas.

High schools can prepare students to step into jobs that require some extra training but not a college degree, such as home health aides, a profession expected to grow by 38 percent over the next decade, or entry-level jobs in construction and the skilled trades. The construction sector, like health care, is expected to grow faster than the national average in the years to come.

As lawmakers push secondary schools to add classes in occupational areas short on workers, many school districts are devising workaround solutions such as partnering with community colleges.

The challenges Minnesota schools face in filling career and technical teacher positions are typical of schools in many states, as are the reasons for the shortage.

This year, a report from a state task force co-chaired by Jones, the superintendent, found that across five in-demand specialties, a third of all CTE teachers had been hired on short-term special permission licenses. In some of those specialties the share was higher: nearly 40 percent for manufacturing, 50 percent for construction and 54 percent for medicine.

Jones wasn’t surprised that so many positions were filled by emergency hires. Schools are working the system to keep their programs running, he said.

His rural district northwest of the Twin Cities has had to find solutions when job candidates are scarce. “One of our [agriculture] teachers is retiring this year, and we’re actually having him back part time next year because of our difficulty finding people,” he said.

The task force report said that Minnesota colleges and universities have been shuttering their CTE teacher preparation programs as enrollment has dropped. It’s hard for schools to recruit people with technical expertise away from industry jobs.

And people from industry that are interested in teaching might be reluctant because of strict teacher licensing rules. Minnesota teachers must have a bachelor’s degree to get licensed, although many people in fields such as nursing or automotive technology only hold a two-year degree.

Advance CTE found similar challenges nationally when it asked directors of state career tech programs what barriers they face in recruiting people in industry to be teachers or to help out in other ways — say to serve as mentors or offer internships to high school students. The No. 1 problem directors identified was lack of funding for salaries and other financial incentives, such as bonuses. 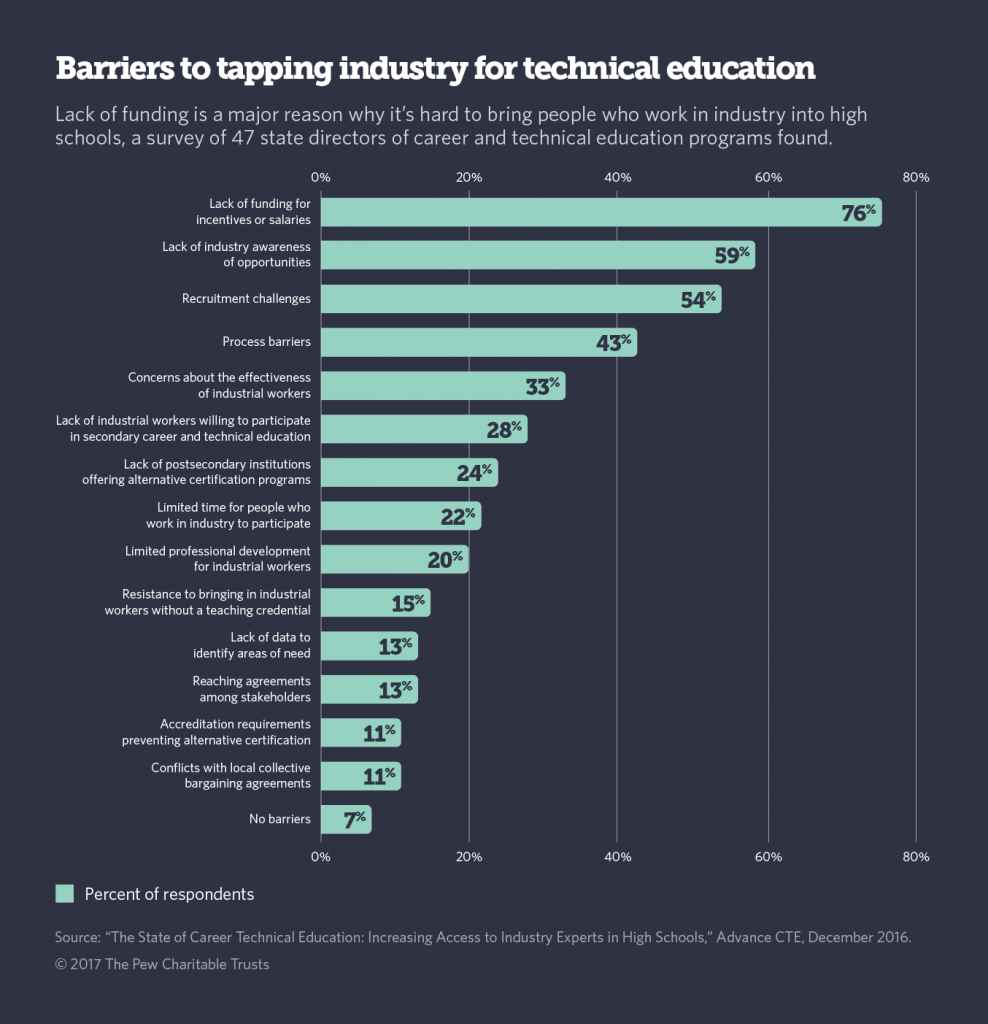 Yet few state directors said their state had tried to attract people from industry with financial incentives. In states that did try it, they said, the approach wasn’t effective.

States may be avoiding increasing pay or offering bonuses because of their tight budgets, said Ashleigh McFadden, state policy manager for Advance CTE. Incentive programs also are hard to sustain long term. They tend to be eliminated in the next budget crisis.

Tennessee has adopted a promising approach. It allows people who have worked in industry to count their years of work experience as years of teaching experience. “They don’t enter on a beginning teacher salary, although they are beginning teachers,” McFadden said.

Minnesota state Sen. Greg Clausen, a former high school principal and a member of the Democratic-Farmer-Labor Party, supports creating a middle category of licenses for career and technical education teachers — between a full license and an emergency credential.

A proposal for revamping the entire teacher licensing system in the state would allow someone with an associate degree, an industry credential or at least five years’ work experience to get a one-year license to teach CTE. Longer-term licenses would be available to candidates with more teacher training. (A separate bill Clausen has proposed would require Minnesota colleges and universities to create a two-year preparation program for CTE teachers.)

Clausen said that schools would have to offer mentorship and on-the-job support for such teachers. “They’ve got the experience, they’ve got the skills. They just don’t have the teaching credential and the classroom skills,” Clausen said of people who come from industry.

The Virginia Legislature and the boards of education in New York and South Dakota have adjusted CTE licensing requirements in recent years to make it easier for people to start teaching. Last year, North Carolina and Virginia created licenses that allow technical workers to teach part time. People from industry in Alabama, Florida, Kentucky and Ohio already have a similar option.

Changes to teacher licensing can be controversial. In Connecticut, the union that represents teachers at technical high schools opposes a bill that would reduce the amount of work experience people need to become technical high school teachers. The union argues that changing licensing requirements would reduce the quality of education students receive, according to the Hartford Business Journal.

States that rethink licensing need to ensure that new teachers are still prepared to manage a classroom, teach concepts and assess students, said Jennifer Zinth, director of high school and science, technology, engineering and mathematics education at the Education Commission of the States, a nonpartisan policy group.

When teachers of any subject quit, it’s usually not because of low salaries, Kreamer said. “It’s because something’s not right in their school environment.” Teachers who feel supported by their school and have someone to turn to for advice are more likely to stay, she said.

School districts looking to expand their career programs may have to pursue a number of employment arrangements.

Take the city school district in Marion, Ohio. Although a technical career center in the county offers high school programs, Harding High School (named for President Warren Harding, who is buried in Marion) has bulked up its own CTE offerings as part of a plan to ensure students graduate and go on to good-paying jobs, further education or the military.

“Simply graduating with a high school diploma is not enough in today’s economy,” said Stephen Fujii, the director of college and career success for the district. Ohio’s superintendent of public instruction, Paolo DeMaria, has praised the district for exposing students to potential careers.

Harding High has some teachers with traditional CTE certification. The school also has recruited people with technical expertise to teach by themselves or with a credentialed teacher from another field. The logistics course, which covers supply chains, is co-taught by a math teacher and an employee of a local company, Marion Industrial Center, who comes to campus a few times a month, for instance. The robotics and production technology courses are taught by a full-time teacher who used to work in the industry.

Fujii said the district has had to reassure its teachers union that hiring teachers with alternative credentials won’t reduce the quality of education students receive. Although it can be hard to convince people with full-time jobs in industry to help teach a class, the district has built relationships with local employers that make such partnerships possible, he said.

Schools also can expand CTE instruction without hiring more teachers. They might partner with community colleges to allow students to take technical classes there for both college and high school credit. Or they might expand work-based or internship opportunities that allow students to learn on the job.

At Harding High, students can transfer to the local career center in the 11th or 12th grade if they are interested in a technical subject the high school doesn’t offer. Since the high school started expanding its career programs two years ago, Fujii said, more students have moved over to the career center to further their studies.