Editor’s Note: As debate intensifies over equal rights for LGBTQ people, research has spotlighted the benefits of a supportive environment for LGBTQ students who are at an increased risk for bullying and violence. Teacher Douglas Ray discusses how educators can find new ways to engage with students’ identities and foster a welcoming climate for all students.

I teach a Queer Literature and Theory class to high school seniors in a small independent school in Birmingham, Alabama. Currently, my class is reading and discussing James Baldwin’s “Giovanni’s Room,” a book that his publisher allegedly told him to burn because of its explicit dealing with queerness. I’m sure that particular publisher would be shocked to know that in a city once known as the “most segregated” in the South, high school students are debating the merits of describing the characters in the book as either “gay” or “bisexual.”

One of my class’s first lessons is that we have to know who we are in relation to each other in the classroom before we can really interpret texts and form knowledge. And so every year, I start off by talking about my own experience growing up queer in the South. When I was in high school, I did not feel safe to explore who I was. School culture was very much shaped by fundamentalist Christian dogma, and I did whatever I could to blend in and survive. My academic growth flourished, but my social and emotional growth were severely, dangerously stunted.

My openness about my own life creates a safe space for my students to be who they are or to explore their many selves.
In the years following high school, I began to own who I was and met people who had grown up similarly to me in Mississippi, who talked about how important acceptance in school is for queer people. And in my early twenties, I lost two friends to suicide, both of whom had been silenced, bullied, or otherwise made to feel unworthy because they were gay.

At that point, I realized that I could either do my best to create spaces where young LGBTQ people felt worthy, or I could wallow in a sense of loss. I chose the former. I knew that I wanted to create welcoming spaces. To do that, I would be honest about my own journey with my students and commit to listening to their narratives and to loving them.

This is my second time teaching this course, and I hope it won’t be my last — but there’s always a concern when teaching material that may be viewed as “radical” or “politically charged” that could silence the discourse you want to open up. After all, Alabama is an at-will state, and anyone can pretty much be fired at any time. I was encouraged, though, that my particular school lists “sexual orientation” in its nondiscrimination policy, unlike many others in the South.

When I created the class, I thought about how people would perceive it, just as I considered whether or not it was the right decision for me to be open about being gay when I first started teaching at this school five years ago. I thought about how I would have felt, as a student in Jackson, Mississippi, if I had known an adult who was gay and also a teacher, or how I would have reacted to seeing queer sexuality as part of a school’s curriculum — worthy to be studied, sanctioned and accepted knowledge.

So I began by being honest about myself. My openness about my own life creates a safe space for my students to be who they are or to explore their many selves.

My hope is that my classroom can build a community of trust among those who enter into conversation here. When we understand who each person is and how that person sees the world, there’s an opportunity for richer dialogue. I feel that my presence on this campus gives permission to students to become who they are without shame or fear, two negative forces especially at play in “Giovanni’s Room.”

It is an act of violence to silence queer people and queer energy in schools. There should be places that affirm an individual’s coming into his or her own. And we, as school professionals, have to be comfortable with talking about queer sexualities and queer people. We have to consider what — and, more importantly, whom — we’re leaving out of our curricula.

I encourage my fellow teachers and school professionals to not only examine our own practices, but to continue discussing what we can do better. Sometimes, it can be the difference between life and death. 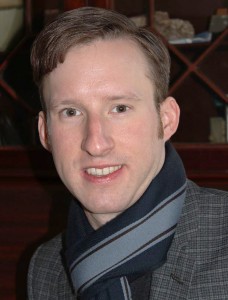 Douglas Ray is Poet-in-Residence at Indian Springs School in Birmingham, Alabama. He is author of the poetry collection “He Will Laugh” and editor of “The Queer South: LGBTQ Writers on the American South,” an anthology of essays and poems. He is a National Association of Independent Schools Teacher of the Future.

Douglas Ray has taught at Indian Springs School since 2010. In the fall, he joins the faculty of Western Reserve Academy as an upper school English teacher. He is author of He Will Laugh, a collection of poems, and editor of The Queer South: LGBTQ Writers on the American South, which was a finalist for the Lambda Literary Award.