DEER ISLE, Maine — Fifteen-year-old Elliot Nevells spends his summers working on a lobster boat. The days are long and grueling, but he doesn’t mind. He comes from a family of fishermen and, like many teens in his island community off the eastern coast of Maine, already makes good money lobstering.

That’s why he surprised himself last August when he agreed to take a week off during the height of fishing season — and lose out on about $1,500 — to attend a voluntary orientation at his high school for students interested in its new marine studies program.

With a career plan that seems like a foregone conclusion, Elliot once thought he’d likely drop out. If he were in high school six years ago, that might have happened. In 2009, Deer Isle-Stonington High School had the lowest graduation rate in Maine, graduating just 57 percent of students. In 2010, the school made the state’s list of the lowest 10 performers.

Turning around failing schools, high schools in particular, is one of the most intractable challenges in public education. More often than not, schools at the bottom remain stuck there. A new federal study found 40 states lacked expertise to help school turnaround efforts. 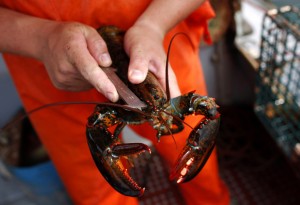 In Maine, lobsters are harvested year-round, but they are most active between June and December. Photo by Jim Young/Reuters

Yet tiny Deer Isle-Stonington has found a way to defy the odds. Its strategy started with relentlessly hounding students not keeping up with their work. It grew, two years ago, to include brand new classes, like the marine studies courses, to get students excited about school. By 2012, the graduation rate was up to 94 percent, above the state average of 86 percent, and has held at about 90 percent since then.

“Schools say you can’t keep everyone from falling through the cracks,” said the principal, Todd West, who moved to the island in 2007 to take over the struggling school. “We think you can.”

There are caveats. With only 118 students in the high school, graduating only a handful more students can boost the numbers significantly. And the school still struggles with performance on standardized tests; only a third of students showed proficiency on state exams in 2014, compared with 45 percent statewide.

It may also be difficult to translate work done in this small school, where in any given year a quarter to 40 percent of students are eligible for free or reduced-price lunch, a federal measure of poverty, to larger, urban schools with higher concentrations of low-income students.

Deer Isle-Stonington staff acknowledge that larger schools might face more challenges in turning themselves around, but say their success still offers lessons. They’ve done it all without changing the staff, a key feature of many school turnaround efforts. Instead, West and his staff have focused on giving kids more support and creating a new curriculum to make classes more relevant to them — strategies that can be useful for educators everywhere.

But they don’t just want to have gone from the worst to above average. They want to be a leader in personalized learning that gets every student ready for college or a career — with either option providing a viable way to make a living. Last year, three-quarters of graduates either enrolled in college or got their lobster license, up from two-thirds the previous year.

Most students are like Elliot: They’ve grown up on the blue-collar, 3,000-person island, with a long history of fishing. Lobstering, in particular, has driven the economy for the past two decades. The nearest large town is 45 minutes away by car, but the area has nearly everything it needs for residents to get by — except reliable cell phone service. Off Route 15, the main road winding down to the water, there are dentists, banks, mechanics and restaurants including the Clamdigger, promising “warm beer and lousy food.”

Like many Maine islands, Deer Isle and Stonington swell with summer tourists, creating jobs that the students help fill. West says that every teen on the island has a summer job — it’s just a fact of life there.

Many kids start working on boats before their 13th birthdays, and one teacher said jokingly that diversity on the nearly all-white island comes down to whether you fish or not. Elliot, like the rest of the boys in his marine studies classes, wears the unofficial uniform of boys who fish: boots, a hoodie and a baseball cap. He talks easily about the pros and cons of different kind of engines.

Related: A new way to design a school

Last year, the island set a new record, bringing in $57 million from fishing, mostly lobster. Successful fisherman there can be millionaires by age 30, West said. That’s stiff competition for a school trying to keep kids’ attention. But locals worry that the lobster bubble could burst any season if the coveted crustaceans continue to migrate east. 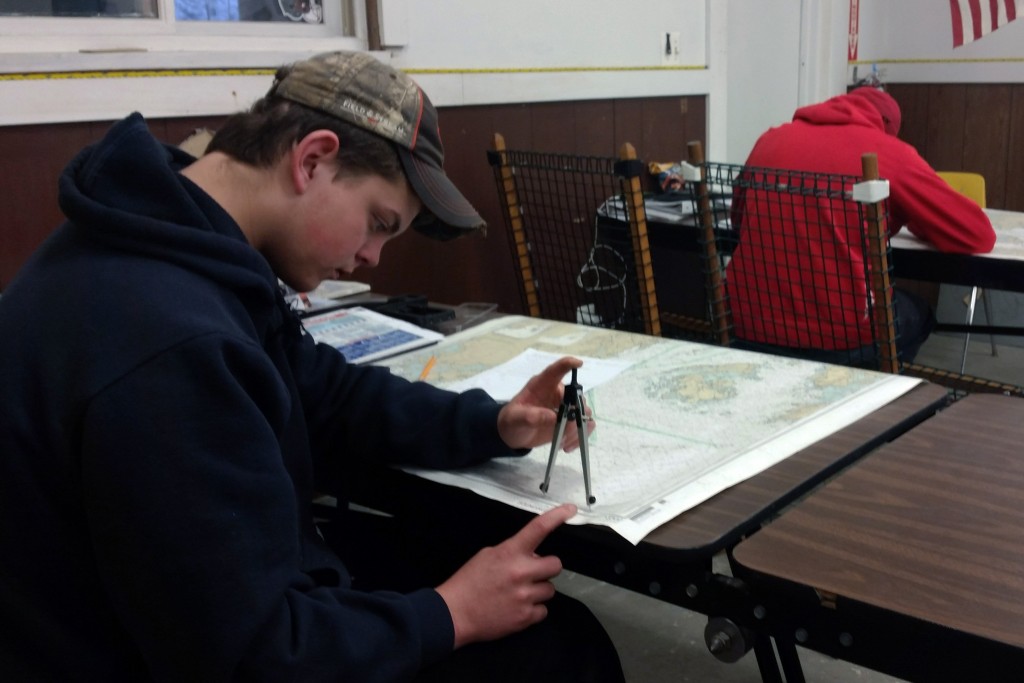 Elliot Nevells takes a test on navigation in his marine trades class. The Deer Isle-Stonington High School freshman says before he knew about the school’s marine studies program, he thought he’d probably drop out of high school. Photo by Sarah Butrymowicz/The Hechinger Report

With no local industry hiring entry-level workers, the school is charged with producing 18-year-olds ready to run their own small businesses. But it also must graduate problem-solvers who can find ways besides lobstering to keep the fishing industry thriving or start other successful companies.

Principal West had only been at the school for two years when it was named one of the worst in the state. He and his teachers applied for a federal grant reserved for the lowest-performing schools in the nation. They didn’t get it. Instead, they carried out their plans on their own, piecing together some smaller grants totaling about $125,000.

Step one was pinpointing students who were falling behind and giving them ample opportunities to catch up. West opened a tutoring center where attendance before and after school is voluntary for some students, mandatory for others. Similarly, a 45-minute daily class period called “intervention” gives students a chance to seek out help or be assigned to work on the skills tripping them up.

These changes helped increase the graduation rate significantly. Then came the hard work of creating an academic program that would actually interest students and show them the relationship between their classes and their lives. Nationally, about a million high school students are enrolled in programs that connect work in school to potential future jobs. Evaluations of such programs suggest they improve attendance and grades by giving students a stake in their own education, rather than having it be an adult-dictated experience.

Deer Isle-Stonington will ultimately allow students to focus in marine studies, arts or health. The island boasts several arts centers, like an opera house and Haystack Mountain School of Crafts, and has many doctors’ offices and a nursing home.

Each year, the school is crafting new classes to teach academic subjects with explicit connections to these industries. For instance, staff members have reached out to marine-based nonprofits and local fisherman to see what they want students to know by the time they graduate. They’ve incorporated the responses — like how to handle the financial end of a business — into their classes.

Related: What if a high school diploma guaranteed a highly paid job?

“Community engagement and support of this school is higher than it’s ever been,” West said. “It finally feels like the school is serving the community and not just babysitting the kids.”

Today at Deer Isle-Stonington, all teachers meet once a month to review students’ progress. At the April meeting, teachers sat at desks in rows, each with a laptop open to the same color-coded spreadsheet monitoring the senior class of 26. West led them through the list of those off track to graduate; there were several. For each one, the group decided what was needed: a check-in from a teacher, perhaps, or a formal meeting, or a call to a parent.

“At graduation this year, we will have 26 kids,” West told his teachers. “It just doesn’t feel like it right now.”

Some seniors at the school say teachers make them focus more now than when they were freshmen. Devin Hutchinson said his teachers make sure he knows exactly which assignments he needs to hand in to graduate in June, to the point of becoming overbearing.

“I like the support, but it kind of gets annoying after a while,” he said.

Devin is eager to get off the island and go to college for graphic design at Eastern Maine Community College but is still finding things to enjoy his second semester of senior year. He’s voluntarily taking a fourth year of one of his least favorite subjects, U.S. history, this time experienced through the arts.

While studying the Civil War, students used makeup to create fake battle wounds. For a unit on the Roaring 20s, those studying flappers created models of headdresses.

On a freezing April night, about two dozen teachers and representatives from various local nonprofits and businesses spent three and a half hours deconstructing lessons learned in the past year and planning classes for next year. An arts and chemistry class might include the science behind ceramics and dyeing. A marine health care class should teach future fishermen how to develop a fitness plan that will serve them on a boat.

Right now, Elliot and the other 15 marine studies students are taking math and earth science with a marine twist. Sometimes that means solving math problems with hands-on projects, like building Styrofoam boat hull models to scale. Other times, the class looks more traditional, with students working their way through algebraic expressions.

Science teacher Jessica Talbot said she still sometimes struggles to get students engaged, particularly when she — without fishing experience — tries to talk about a marine world where the kids are already experts.

In a recent class on formulas and unit conversion, a topic that threatened to lose student attention completely, Talbot posed a hypothetical example to get the group started with very basic math. If lobsters are going for $900 per crate, how many crates would you need to sell to make $2,000?

“You guys can do this. You’ve already done it,” she said. “But when we phrase it in math terms, it confuses the crap out of you.”

Elliot now says he made the right decision to attend last summer’s orientation, a requirement to take the marine classes this year. He was unsure at the time, but the program sounded vaguely interesting and he liked the topics the classes promised to cover. As his freshman year winds to a close, he’s already thinking about going to college to study something that would help him if the lobster industry ever failed.

“That’s what the program did for me,” he said. “It’s helped me want to learn.”

Editor’s note: This story originally referred to the principal of Deer Isle-Stonington High School as Tom West. His name is Todd West.

This story was produced by The Hechinger Report, a nonprofit, independent news organization focused on inequality and innovation in education. Read more about high school reform.

Left: A Deer Isle-Stonington High School student works on a Styrofoam model of a boat hull he created in a math and science class. The school has created a new curriculum to show students the relevance of their classes to prospective future careers in the fishing industry. Photo by Sarah Butrymowicz/The Hechinger Report

Sarah Butrymowicz is data editor at the Hechinger Report, covering K-12 education across the country. Her work has appeared in The Washington Post and the Los Angeles Times, as well as on Time.com and NBCNews.com.