Teachers’ Lounge: Teaching politics in the age of Trump

Editor’s Note: Presidential elections give teachers a chance to engage students in lessons about the electoral process and what it means to be part of a democracy. But some of the behavior exhibited during this primary season has posed a challenge for teachers.

Justin Christensen has taught Advanced Placement Government for 10 years at St. Ignatius College Preparatory in San Francisco, California. In 2013, he co-founded a Twitter community of government teachers at #hsgovchat. Christensen said he strives to maintain political balance in his classroom but sometimes finds himself in an uncomfortable situation when discussing Republican candidate Donald Trump and his attention-grabbing techniques.

Like many teachers all over the country, I stop at a local cafe every morning for my cherished daily cup of coffee.

As I waited for my coffee one morning in March, I scrolled through my Twitter feed and discovered that Donald Trump yet again fired off tweets the previous night that were getting a lot of attention. The first was a veiled threat to “spill the beans” on another candidate’s wife, and the other seemed to promote fear of an entire religion.

I would be in front of my students in 90 minutes. Should I show these tweets in class today? What should I say if a student asked me about them?

Before I got in my car, I took screenshots of both tweets and posed a question to my colleagues on Twitter: “As teachers, how do we respond when (Trump)’s statements would break our own classroom rules?” 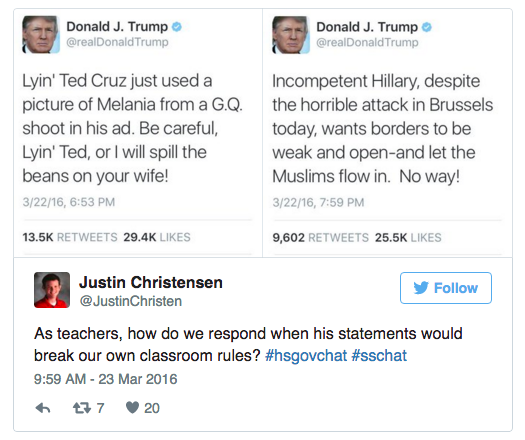 I did not often encounter this dilemma when I taught AP Government during the previous two presidential elections. I happily presented both sides to my students. In 2012, I even bought cutouts of Barack Obama and Mitt Romney. I would stand next to each cutout and act as their spokesman. Since my students tended to support Barack Obama, I spent more time speaking on behalf of Romney. I wanted my students to listen to both sides in order to develop an informed opinion.

This year, I have yet to buy a cutout of Donald Trump.

As I tried to explain in my tweet that morning, I was uncomfortable acting as a spokesman for someone who would routinely break my own expectations if he were a student in my class.

For example, he would fail to meet my expectation that students treat each other with respect and avoid profane language. Trump has mocked a reporter with a disability. He has criticized the appearance of Carly Fiorina, Megyn Kelly and Heidi Cruz. He has said he will “beat the s— out of” ISIS. He has stated that he would “like to punch (a protester) in the face.” He has even alluded to his own personal anatomy.

I also expect my students to use facts to defend their claims. The editor of Politifact, which fact-checks claims by politicians, found that Trump’s “record on truth and accuracy is astonishingly poor.”

When I posted that tweet that morning, my colleagues on Twitter began to weigh in. Here are a few examples. 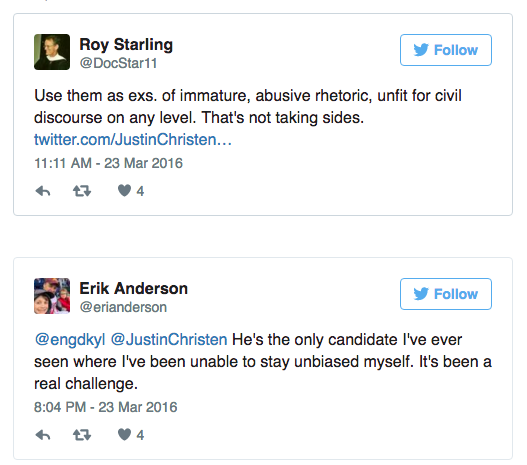 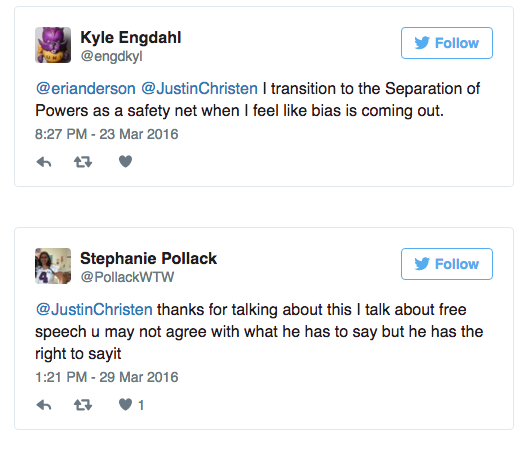 Thanks to the Twitter community of teachers that use #hsgovchat and #sschat, I discovered that I was not alone. Other teachers are also wondering how to facilitate conversations about Trump in their classrooms.

So how should we teach government in the age of Trump? Since that early March morning at the cafe, I have developed five helpful questions to ask my students.

1. When does Trump’s rhetoric contradict our classroom rules? We need to explicitly name such examples, otherwise our students may misinterpret our silence as support for such language in our schools.

2. Why does Trump use controversial rhetoric? Invite students to analyze the media industry and research how much free media he received.

3. What does polling reveal about the coalition of supporters Trump has created? We must invite our students to understand his appeal and analyze its deeper causes.

4. What do experts think of Trump’s proposals (such as deporting 11 million undocumented immigrants or bringing back waterboarding)? We should ask our students to fact-check and evaluate his claims.

5. How does Trump fit in the Republican party? We should remind our students that Trump does not speak for many conservatives or Republicans. For example, students should hear Speaker Paul Ryan’s response to Trump’s proposal to ban Muslims from entering the country: “This is not conservatism. What was proposed is not what this party stands for.”

Taken together, these five questions have helped me navigate discussions about Trump in my classroom. In our schools, we create expectations for how we talk to each another, conduct research and develop an informed opinion. We must enforce these classroom expectations, even if a presidential candidate breaks them.