The business class where high school students are running the company

As both a business owner and student, 20-year-old entrepreneur Bobby Lenahan thought the idea of starting his own venture while helping others sounded really cool.

Lenahan, an alum of William Floyd High School in Mastic, New York, credits a high school business class with giving him the skills and drive to start his own company.

“This class is entirely a hands-on approach — quite different from what we’re used to.”

In Virtual Enterprises International, also known as VE, students write a business plan, buy and sell products online with other high schools (no currency is actually exchanged), maintain personal and company bank accounts, work with mentors and compete in state and international competitions.

Lenahan was vice president of accounting for his VE class, which created a fitness equipment sales company, Forever Fit by Floyd. The students are “very driven,” said Lenahan. “They’re the movers and shakers of tomorrow. And you can tell they are going to do it. And VE is what offers them those skills.”

The New York City Department of Education began the VE program in 1996 after the Department of Education sent Iris Blanc, an assistant principal at the time, to Austria in order to study how schools incorporated business simulation classes into their education system. The business programs Blanc observed had grown out of the European apprenticeship model, which relied on the “learn by doing” principle.

Although it started as a pilot project in just seven New York City schools, word soon spread to other states. Within five years, 65 high schools had started VE programs. In 2011, VE became a nonprofit organization, and today, VE is in 400 high schools across 19 states and is part of an international network of schools in 42 countries. Just under 50 percent of students are from low-income and minority backgrounds.

Blanc says that the transformation of the kids is the best part of her job. “Some completely unmotivated by school have now identified their own talents and self-confidence,” she said.

“This class is entirely a hands-on approach — quite different from what we’re used to,” said Cyril Antoney, a current 11th grade VE student at Herndon High School in Virginia. He attributes his entrepreneurial spirit and belief in the American dream to the class, his teacher and his family, who immigrated to the U.S. from India when he was 5.

“I think if you have high expectations of kids, they will achieve that level,” said Antoney’s teacher Kathy Thomas, who’s been teaching the class for the past seven years.

Antoney’s class in Herndon started ScholarME, a software company that helps students find college scholarships. ScholarME took first place in the business plan state competition, which qualified them to compete in the international trade show in New York in April. The competition is similar to Shark Tank, “except,” he said, “the sharks are a lot nicer.” 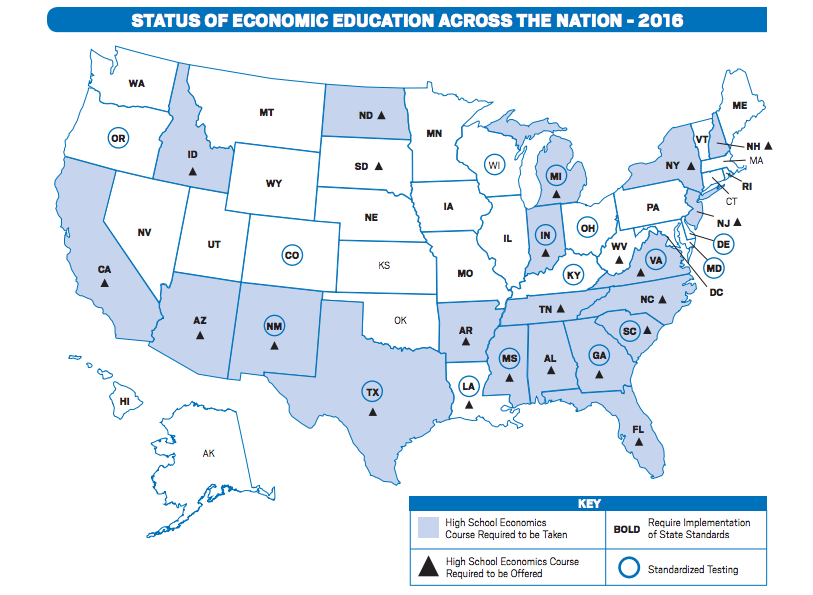 Twenty states in the U.S., highlighted in blue, require students to take an economics course, according to a 2016 report by the Council for Economic Education. States with a black triangle must offer economics, states in bold require implementation of state standards and states with a circle require standardized testing.

Carly Shay, a senior at Lakeland High School in White Lake, Michigan, said VE pushed her into a new career path. Shay had planned to go into the culinary arts, but after taking VE for three years and overcoming her shyness as CFO and then CEO, she decided she wanted to major in accounting when she starts at the University of Akron next fall.

“I think it’s imperative we prepare kids for the business world….Acquiring the knowledge is fine, but if you can’t use it, it doesn’t do you a whole lot of good.”

While VE continues to grow nationwide, only 20 states require high school students to take an economics class, and just 17 states require courses in personal finance, according to the Council for Economic Education.

“I think it’s imperative we prepare kids for the business world,” said Richard Stacy, who owns a consultancy business with his wife Karen Stacy. Both are professors at Metropolitan School of Professional Studies at Catholic University in Washington, D.C., and also mentor the Herndon students. “Acquiring the knowledge is fine, but if you can’t use it, it doesn’t do you a whole lot of good,” Stacy said.