Jonas De Leon used to watch jets zooming by overhead from the porch of his childhood home, dreaming of what it would feel like to fly.

“That was the only dream I had that stayed with me,” De Leon said, chuckling as he pointed to his 1984 single-engine Mooney aircraft across the tarmac of Maryland’s Frederick Municipal Airport.

She took her first flight lesson at a teacher’s workshop and thought, “Wow, I can do this.”

De Leon learned to fly at the age of 17. Now a science teacher at Gregorio Luperón High School for Science and Mathematics in Manhattan, he’s part of a small national program introducing students to aviation.

This fall, Gregorio Luperón, a school where 100 percent of the students are recent Latino immigrants, is one of 80 public, private or charter schools in the U.S. to participate in the first year of a four-year STEM aviation curriculum created by the Aircraft Owners and Pilots Association (AOPA), the world’s largest community of private pilots.

Several years ago, AOPA members began to talk about creating an educational program in order to tackle some significant challenges, including a pilot and mechanic shortage that’s driving upheaval in the industry.

When students are exposed to aviation, it opens their eyes up to new possibilities, said Cindy Hasselbring, the director of the curriculum at AOPA who is a former math teacher and a private pilot.

It’s happened to her. She took her first flight lesson at a teacher’s workshop on aviation in Lansing, Michigan, and thought, “Wow, I can do this,” she recalled.

The need for workers

The new curriculum aims to instill in young people a love of flying, which has somewhat waned in American culture for a variety of reasons, and could be key to driving more skilled workers into the field.

By 2037, Boeing estimates that 206,000 new commercial pilots, 189,000 mechanics and 174,000 cabin crew will be needed in the United States. Boeing’s forecast comes as thousands of baby boomers prepare to retire from the industry and the company looks to double its fleet over the next 20 years.

A 2017 study by the Aviation Technician Education Council showed 30 percent of airplane mechanics are right around retirement age, but only 2 percent of those jobs will be refilled by new workers each year, leaving a large skills gap.

And the Federal Aviation Administration has also seen a drop in the number of pilot certificates by more than 60 percent since 1980, due in part to new safety measures.

At an AOPA training in June, former high school teacher and pilot Chris Moser showed teachers how to complete a preflight checklist and taught a lesson on airline crashes. The class sat still as they listened and then discussed the flight data recorders of the deadly Colgan Air flight that crashed outside Buffalo, New York, in 2009.

The accident was significant because it highlighted the low salaries and working conditions of regional airliners at the time, although the probable cause of the crash involved pilots not heeding the stall warnings properly. In response, Congress increased the minimum number of training hours that commercial pilots needed from 250 hours to 1,500, a move that has come under scrutiny from the regional airlines and Republican lawmakers.

They said the new rules have exacerbated the pilot shortage. Last year, Horizon Air, Alaska’s regional airline, was forced to cancel hundreds of flights, because it didn’t have enough pilots to fly the planes.

How the program works

Classes offered to ninth grade students involve a mix of theory and hands-on projects, which include making hot air balloons, setting off rockets, and building cardboard wind tunnels — something the Wright Brothers used in their own flight experiments in the early 1900s. The AOPA’s curriculum will be completed by the 2021-22 school year, which will allow this year’s freshman class to take it all the way through high school. The course is also available as an elective.

The curriculum is free for schools, aside from some costs of teacher training and classroom supplies. The AOPA Foundation funds the initiative through private and corporate donations, including $100,000 from American Airlines. 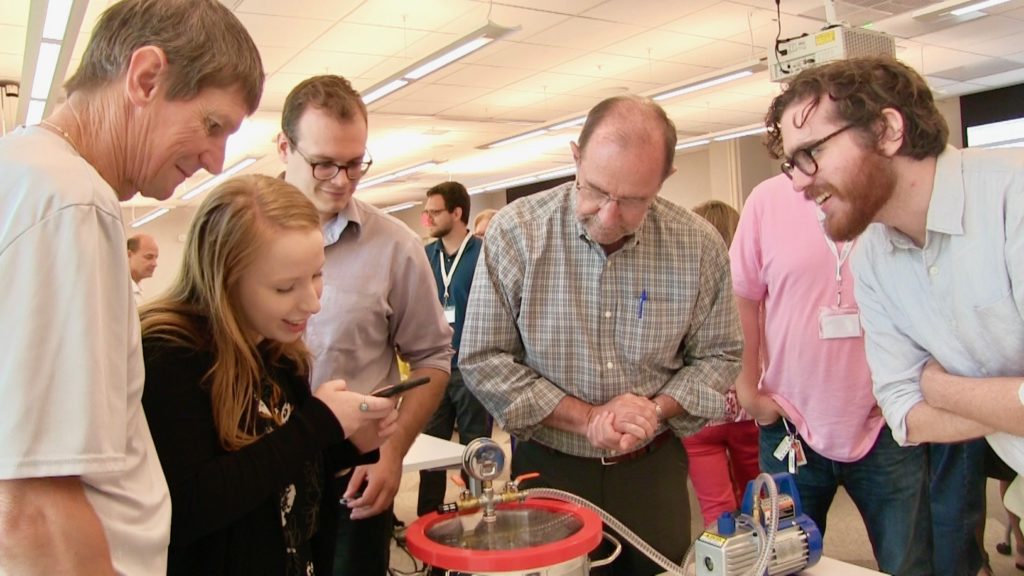 A group of educators takes part in a training workshop called the “Peep Odyssey Innovation Challenge,” in which Students build a space condo to protect an “astronaut” (Peep marshmallow) from the harsh environment of Mars (vacuum chamber). The goal is not to have the Peep expand or shrink when the adjusting air pressure.

At the end of the four years, the goal of the program is to provide students with the skills either to get a job in the industry or pursue a degree in a related field, said Katie Pribyl, AOPA’s senior vice president for Aviation Strategy and Programs.

“It could never be a better time to get into aviation and aerospace,” she said.

De Leon says the course makes him feel like a new teacher again. The class meets daily, and his students return after school to practice flying the simulators. The hands-on activities give them a chance to compete to their fullest potential, he said.

Before the class, his students didn’t know about career options in aviation or steps to become a qualified pilot, or even how to get to the airport. “It’s piqued their curiosity,” De Leon said.

And their career options could be vast. There is demand in cargo transport, flight instruction, drone operation, software and electrical engineering sectors as well as in the commercial space industry, which includes aerospace engineering and rocketry, said Pribyl.

Other ways to take off

Brandon Jones, a 24-year-old pilot based in his hometown of Boise, Idaho, says he wishes he had had a program like AOPA’s when he was in school.

Jones attended a fairly large school district that offered career and technical education classes, but no courses in aviation. Instead, he became interested in an aviation career mainly through hearing his grandfather’s stories as a pilot. Jones called the AOPA curriculum “revolutionary” and said he likes that the classes are built into the school day and count toward academic credit.

“There are so many things aviation can offer, they just have to know about them.”

“It is a family when you get into aviation,” said Jones, who flies even in his free time, renting planes and taking friends and family flying. He likes the idea of mentoring young people, too, and sharing that sense of adventure.

Aviation historian Millbrooke can point to government efforts to promote aviation as early as the 1920s, but which did not seem to have the comprehensive approach that AOPA hopes will make their program a success.

The Civil Air Patrol has kept its youth program in place since World War II and offers free STEM lesson plans to educators. Mervin K. Strickler, Jr., a pioneer who served as the patrol’s director of aviation education, researched how flight programs could help disadvantaged youth in the 1970s. Similar to the Girl Scouts and Boy Scouts, however, the Civil Air Patrol’s flight programs are conducted outside of school. 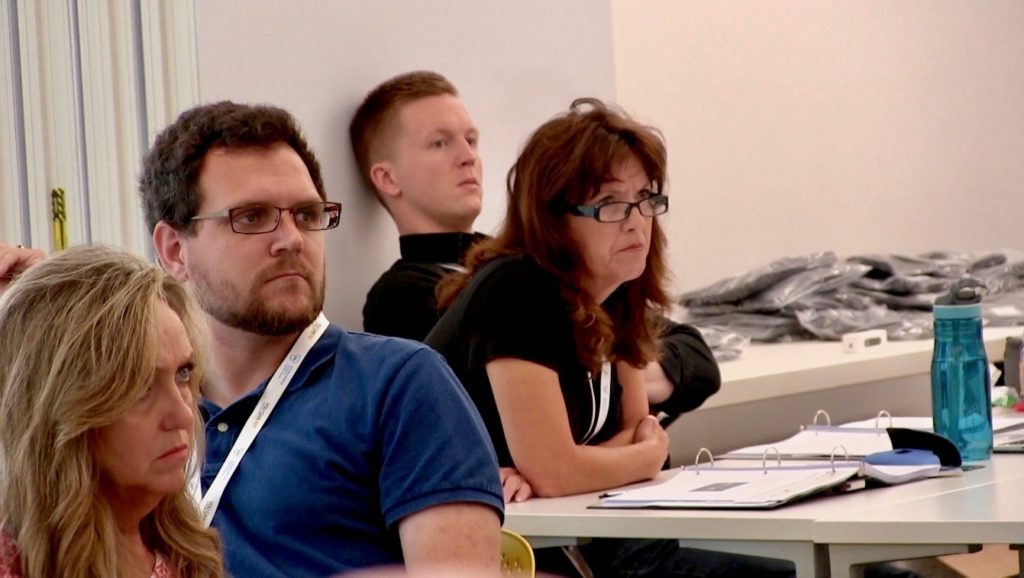 Teachers listen to the flight data recorders of Colgan Air Flight 3407, at the AOPA’s headquarters in Frederick, Maryland, in June, 2018. The plane crashed on Feb. 12, 2009, killing all 49 passengers and crew on board, as well as one person inside their home.

The military is another pathway to aviation for underrepresented groups, according to Millbrooke. Drone operators and mechanics are currently in high demand as the armed forces integrate new technology in its missions.

Once servicemembers complete their military service, they can take those skills to the private sector, like real estate and aerial mapping. Still in its infancy, Jones said this sector poses a tremendous opportunity for young learners who may excel in video games and have good hand-eye coordination and motor skills.

“There are so many things aviation can offer,” Jones said, “They just have to know about them.”

Changing the face of flying

Attracting more women and minorities, two groups historically underrepresented in the industry, could help address the worker shortage. Historically, both faced significant discrimination, as well as financial and legal barriers, to entering the field.

Hollywood’s romantic pilot archetype may not have helped woo these groups either, said historian and pilot Anne Millbrooke, who wrote “Aviation History,” a textbook for colleges and flight schools also used by high-school aviation clubs.

By casting a wider, more inclusive net, the AOPA hopes its program will attract people who haven’t previously considered aviation.

The program is also reaching out to students in rural areas.

Pribyl, who grew up on a cattle ranch in rural Montana, said her graduating high school class had 15 students and her school didn’t have access to flying or aviation.

“I didn’t really have anyone to turn to,” said Pribyl, who worked as a commercial pilot for several years before coming to AOPA.

She believes the aviation curriculum could be a game changer — for both rural students like her and for those in the inner-city.

For years, De Leon didn’t tell his students he was a pilot. He didn’t want to sound like he was bragging, but when his students eventually found out, they were in awe and asked him many questions.

He now proudly shares his stories about flying, in hopes that other students might choose to become pilots themselves.

“My life is pretty much their life,” De Leon said. “They can see me and an example of what is possible.” 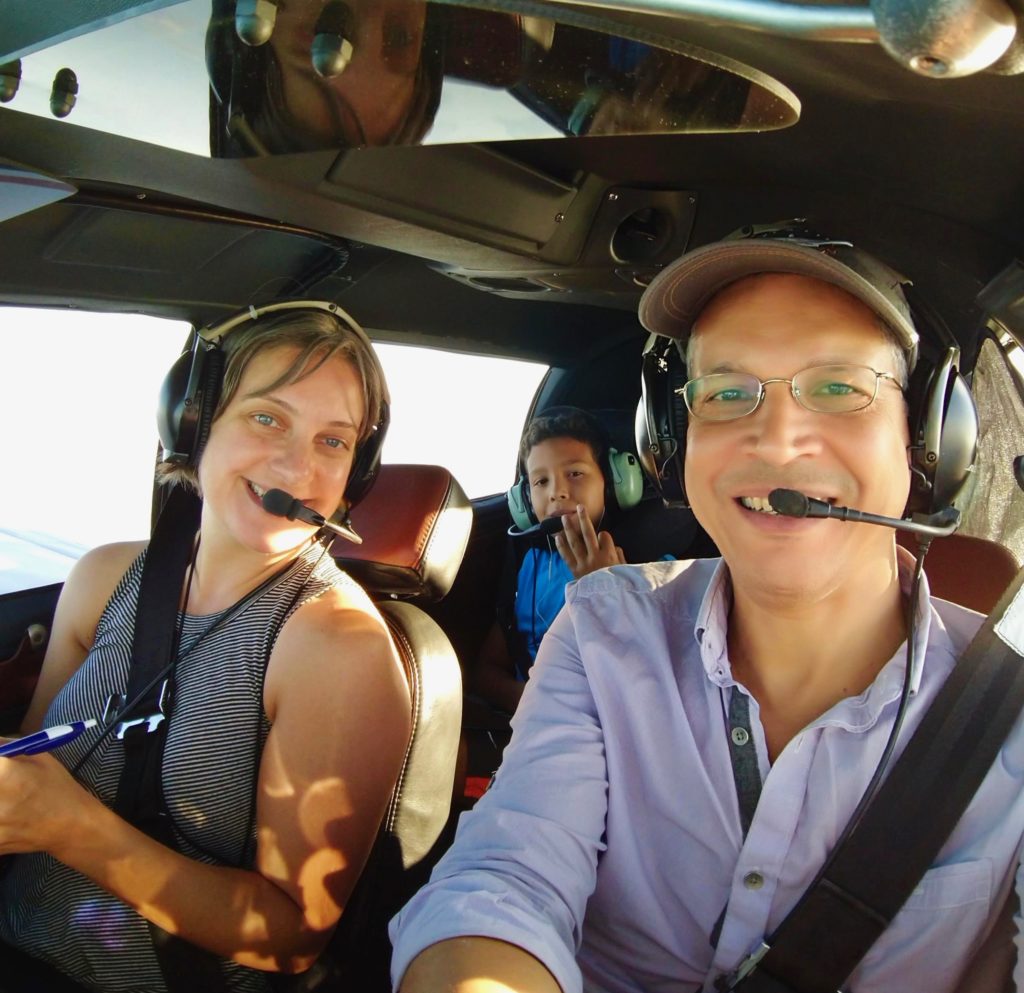