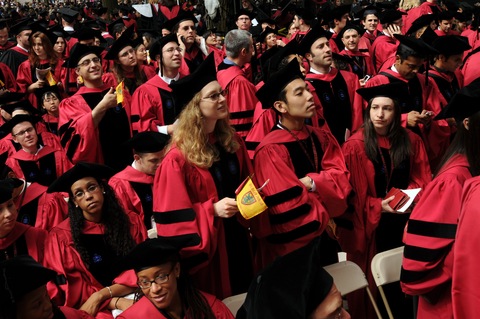 In addition to record-high tuition costs, college students will be squeezed by the government when interest rates double on new student loans. Photo by Getty Images

The clock is an estimate of the current student loan debt of both federal and private student loans.

When faced with this issue last summer, Congress postponed the increases for one year. Lawmakers went home this time without an agreement on a long-term solution, though the Senate on July 10 will vote on a proposal that would extend the 3.4 percent interest rate for another year.

“As a result of their obstruction, the Democrat-led Senate will leave town and allow interest rates on some new student loans to increase on Monday,” Senate Minority Leader Mitch McConnell, R-Ky., said before the recess.

In researching the growing amount of college loan debt that students are taking on as academic sticker prices steadily increase, we wondered: Is it still possible to graduate without debt?

White House spokesman Matt Lehrich said the Senate “will take action in the next few weeks to fix this problem. We are confident they will get there, and that the solution will include retroactive protection for students who borrow after July 1 so that their student loan rates don’t double.”

In assessing the best plan for establishing interest rates on subsidized Stafford loans, it’s no surprise that lawmakers are split across party lines. As is the case on many important issues Congress is wrestling, partisan politics are at play.

The Faces of Student Loan Debt

Earlier this year, we asked Americans to share how the $1 trillion student debt situation affects them.

With time running out, here’s a look at the last-minute solutions Congress is contemplating:

Senate Democrats oppose the bill, and a spokesman for Senate Majority Leader Harry Reid, D-Nev., said, “Republicans continue to insist that we reduce the deficit on the backs of students and middle-class families, instead of closing tax loopholes for the wealthiest Americans and big corporations.”

President Barack Obama threatened to veto the bill, saying it would not guarantee low rates, would impose the largest interest rate increases on low-and middle-income students, and does not offer extended repayment options to borrowers who have already left school.

Mr. Obama instead has advocated for a fixed-rate solution, no cap, with subsidized Stafford loans tied to the 10-year Treasury interest rate plus 0.93 percent. Unsubsidized loans would be tied to the 10-year rate plus 2.93 percent, and PLUS loans at 10-year rate plus 3.93 percent. This plan is intended to be budget neutral, and does not cost money or generate savings. House Speaker John Boehner, R-Ohio, has said the House solution is “very close to what the president offered in his budget,” and urged Mr. Obama to compel his Democratic colleagues to pass the market-based student loan bill.

This bipartisan compromise was proposed June 27 … by Sens. Joe Manchin D-W.Va., Richard Burr, R-N.C., Tom Coburn, R-Okla., Lamar Alexander, R-Tenn., and Angus King, an independent from Maine. It would tie interest rates for newly-issued student loans to the U.S. Treasury 10-year borrowing rate and add 1.85 percent for subsidized and unsubsidized undergraduate Stafford loans. It also would add 4.4 percent for PLUS loans and the cap on interest rates for consolidated loans would remain at 8.25 percent. The CBO estimates this plan would reduce the deficit by $1 billion over ten years.

This was introduced by Democratic Sens. Jack Reed of Rhode Island, Kay Hagan of North Carolina, Tom Harkin of Iowa, Al Franken of Minnesota, Elizabeth Warren of Massachusetts and Debbie Stabenow of Michigan. This legislation would be another punt, extending the current rate of 3.4 percent for one year to allow the Senate to work on a long-term solution.

Warren drafted this legislation, which sets the interest rate on federal Stafford loans to the rate the Federal Reserve charges banks for loans. This would lower student loan interest rates to 0.75 percent. Her bill has not come up yet for a vote, but has already been endorsed by 28 colleges and universities and has the support of the liberal group Democracy for America. Jim Dean, DFA’s chairman, called Warren’s plan something that is “real, long-lasting student loan reform.”

While students wait for Congress’ next steps or inaction on interest rates, what’s lacking attention is the enormity of student loan debt. Americans owe a collective $1 trillion in education loans – that’s more than auto loans ($730 billion) and credit card loans ($693 billion), according to a Federal Reserve Bank of New York report. With student loan debt increasing at a rate of about $2,800 per second, the question of paying it back masks the larger problem of college affordability.

Tuition costs continually increase on a yearly basis, but why do they and who is benefiting most? According to a report issued by the Congressional Budget Office, the government is projected to make a record $50 billion in profit on student loans this year, and an additional $21 billion should loans double on Monday.

NewsHour’s economics correspondent Paul Solman explored the state of student loan debt and asked experts about the surge in college tuitions. Neal McCluskey of the Cato Institute argued it’s because the government is financing student loans. “The massive inflation we see in tuition, in college prices…[is] a product in large part of federal student aid…if you give someone $100, you tell them they have to use it for college, and colleges know they have it, of course they’re going to raise their prices,” McCluskey told Solman. On the other hand, Martha Kanter, U.S. Undersecretary of Education, attributed the increases to states cutting funding for higher education.

While students are significantly taking on more in student loans, the Federal Reserve Bank of New York found that young adults under age 30 are now putting off homeownership, buying cars, and using credit cards. In addition, the threat of defaulting on a student loan has pushed graduates to accept jobs that pay the bills instead of risk-taking or starting new businesses. In our segment, Feinberg and Segal both agreed this hurts the economy because young people delay major life decisions and are forced to use their earnings to pay off debt rather than invest in their futures.

In the second part of his report on student lending, Solman further explored the challenges indebted college graduates face and whether or not their loan burden should be forgiven.

Student Loan Debt: To Pay or Not to Pay?

To get the perspective of everyday people, NewsHour asked our viewers how student debt has affected them. And in a special report, NewsHour highlighted just a few of the many faces of student-loan debt.