The College Board has for several years been testing an “adversity index” designed to place students’ SAT scores in the context of their socioeconomic advantages or disadvantages. The system has been used by about 50 colleges and universities. On Thursday, the College Board said it would be expanded to about 150 colleges later this year and be made available to all colleges in 2020. 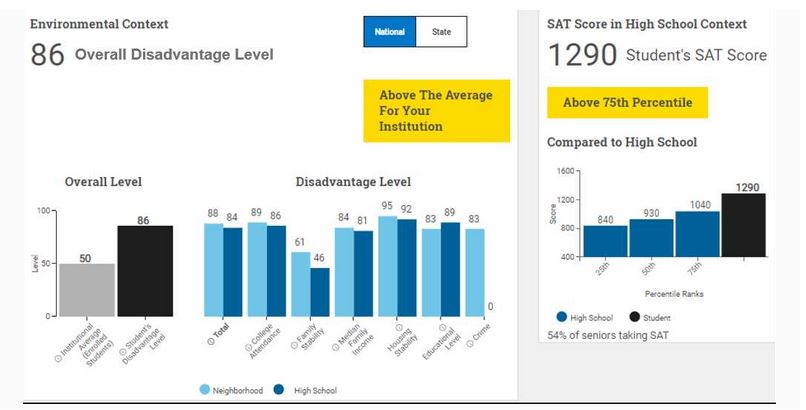 In the United States, a disproportionate share of low-income families — generally without access to the best public schools — are black or Latinx. These patterns have been cited by the growing number of colleges that have dropped requirements that all applicants submit SAT or ACT scores. And many admissions experts expect that number to grow if the current lawsuit against Harvard University’s affirmative action policies leads to new legal limits on the right of colleges to consider race in admissions.

The College Board is able to produce the index based on databases it has on just about every high school, and those databases have been expanded to include information about neighborhoods. An underlying theory of the system (backed by most demographers) is that most high schools and neighborhoods in the United States are not terribly diverse economically. So it is the rare high school that has many wealthy and many low-income students. Thus information about the high school and surrounding neighborhood would be useful, College Board officials said. In addition, the College Board is including information on SAT averages and Advanced Placement enrollments and test scores — and the board has access to that material from its own operations.

Chart via The College Board

Two examples of how some of the material would appear to test takers appear above and at the top of this article.

Among the factors that would go into the adversity index are some that are economic (proportion of students at a school who are eligible for free or reduced lunch), that reflect economic challenges (housing instability) and educational status (percentage of students who go on to college). A score would be on a scale up to 100.

The College Board noted that individual colleges will have to decide what, if anything, to do with the information. The College Board has in the past adopted major changes — such as adding the writing test — that most colleges have ignored.

During the pilot, some colleges that have used the index have said that it has been helpful.

In a presentation last year, John Barnhill, assistant vice president for enrollment management at Florida State University, said that admissions officers were finding the information helpful. And in a number of cases, he said, the context provided by the index led to changes in the admissions decision made — generally changes that involved admitting disadvantaged applicants who might not otherwise have been admitted.

Marvin Krislov, president of Pace University (which requires applicants to submit SAT or ACT scores), said he thought the index “could be one of several helpful data points” used by admissions officers to get a better sense of an applicant.

But Krislov, who was general counsel at the University of Michigan when it successfully defended an affirmative action policy before the U.S. Supreme Court, stressed that he did not see the index taking the place of affirmative action. That’s because the index is ultimately not about the individual student.

Robert Schaeffer, a longtime critic of the College Board who is public education director of FairTest: The National Center for Fair & Open Testing, issued a statement saying that the new index demonstrated what SAT skeptics have argued for years.

“Test makers long claimed that their products were a ‘common yardstick’ for comparing applicants from a wide range of schools,” he said. “This latest initiative concedes that the SAT is really a measure of ‘accumulated advantage,’ which should not be used without an understanding of a student’s community and family background.”

Among those who have been paying the most attention to the index as it has been developed are those who advise students on test prep and college admissions. Some of them shared the FairTest view and identified other concerns.

Randolf Arguelles, branch director of Elite Prep San Francisco, said that the index “is effectively College Board admitting that the SAT is unfair.” He added, “If the score on your standardized test requires a separate algorithm to determine if the score is actually a valid measure of ability, then perhaps it’s time to fix the test itself rather than contextualize its scores.”

Several experts criticized the College Board for not sharing with students what their adversity score would be.

A blog post from Magoosh, a test-prep company, predicted that some students would suspect that they had an incorrect score — and were being hurt by that. “Magoosh strongly urges the College Board to make adversity scores and associated data fully available to students and parents, with enforceable avenues to address concerns and correct mistakes as they arise,” said the blog post.

Michael T. Nietzel, former president of Missouri State University, writing in Forbes, said that “the fact that the College Board does not want students to know their adversity scores reflects their own discomfort with the concept. And for good reason. It’s a potential source of self-handicapping and self-fulfilling prophecy,” he wrote. Along those lines, he said that neighborhoods need not be destiny, and he said he was bothered by generalizing about students from where they live.

Nietzel added, “At a time when standardized testing is under increased scrutiny and is even being discontinued or minimized as an admission tool by hundreds of colleges, one must wonder whether adversity scores are primarily an attempt to protect the SAT’s market or to promote social mobility. Colleges that are genuinely concerned about the bias built into the tests or the cheating associated with the SAT or the ACT have a simpler choice: don’t require students to take them.”

It provides information about the student’s environment. It puts a student’s SAT score and other academic accomplishments included in their college application in the context of where they live and learn.

A blog post by Top Tier Admissions asked how much new information would truly be provided.

“Much of this is already baked into how selective college admissions work, especially those contextual factors that have to do with a student’s family and school,” the post said. “Data on the high school environment — curricular rigor, percentage of students qualifying for free/reduced lunch, and AP offerings — are easy to discern from the school’s official high school profile or website.”

The post went on to say that admissions officers should be praised for trying to examine the context of applicants’ lives and for trying to admit diverse student bodies. But the post questioned whether other motives may be at play in this new service.

“It’s hard not to wonder what else might be behind the College Board’s actions,” the post said. “The inclusion of ‘AP opportunity’ seems like an overt ploy to get more high schools to implement the AP curriculum. We know that the College Board has been losing market share to the ACT, so is this a business decision intended to reverse the declining revenue?”

As the SAT evolves, so do opinions on its value