After trying everything to increase graduation rates, this college is cutting back

This piece was produced by Inside Higher Ed, a free, daily online publication covering the fast-changing world of higher education.

Few colleges have signed onto the national college completion agenda with as much vigor as Sinclair Community College. And while national graduation rates have seen only a slow inching up, Sinclair has managed a big jump.

The two-year college, in Dayton, Ohio, first began working to improve student success in a systematic way back in 2000. That was when Sinclair was picked by the League for Innovation in the Community College as one of its Vanguard Learning Colleges — a recognition of institutions that made “learner-centric” completion a central goal.

Since then Sinclair has tried over 100 completion-related projects, ranging from participation in Completion by Design to making new student orientation mandatory and conducting interventions in local high schools.

“Every department on campus is focused on increasing student completion,” said Kathleen Cleary, Sinclair’s associate provost for student success, a position the college created in 2011.

However, the college has begun pruning its student success portfolio, to sharpen its focus and concentrate on what works. One recent trim has been its participation in Achieving the Dream, a national nonprofit with more than 200 community college members.

“They’re doing everything,” said Mark Milliron, a former official with the Bill & Melinda Gates Foundation and president of WGU Texas. Milliron is a co-founder and chief learning officer at Civitas Learning, a student-success oriented company that offers predictive analytics to colleges, which Sinclair uses.

The time, effort and money — much of it coming from foundations like Gates — is paying off.

Sinclair, an urban college that enrolls about 24,000 students, created its own metric to track completion rates. It looked at three groups of students during five-year periods after they first enrolled.

Less than a third of students who enrolled in 1999 earned degrees or certificates, transferred or were still enrolled in good standing and making progress toward a credential by 2003. However, that number rose to 56 percent for the group of students Sinclair tracked between 2009 and 2013, a 75 percent increase (see chart, below). 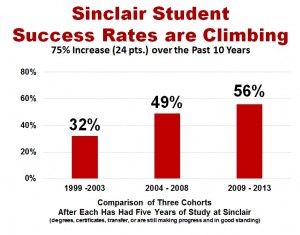 Sinclair has had stable, committed leadership for a long time. Steven L. Johnson arrived at Sinclair as chief operating officer 15 years ago. He became president three years later, in 2002. That continuity is a big plus for making graduation rate improvements, said several experts on student completion.
The college also has had outside funding for some of its student success work.

“They were supported by foundations to come into Achieving the Dream,” said Carol Lincoln, a senior vice president for the nonprofit completion group. “They’ve got a resource base that’s quite different than other institutions.”

Even so, Sinclair has made unusual progress.

Nationwide, the percentage of adults who hold college credentials only increased 2.1 percentage points between 2008 and 2013, to 40 percent, according to the Lumina Foundation. And the National Student Clearinghouse Research Center said only 39 percent of community college students who first enrolled in 2008 earned a college credential by 2014.

After 15 years, Sinclair has reached a rare form of maturity in its approach to student success. As evidence of this shift, the college has begun contemplating how to pare back, by eliminating some completion-related programs so it can focus on others.

“We haven’t always been good at stopping,” Cleary said.

That’s hardly unique in higher education, which is an additive industry. Ask a college president which programs he or she has cut in recent years and you’re likely to hear a dodge or a long-winded version of “none.”

As a result, some faculty members complain of “initiative fatigue,” which can also be a big drain on institutional research departments.

“You have to have focus,” said Josh Wyner, vice president and executive director of the College Excellence Program at the Aspen Institute. “You need a real commitment to analysis of what works.”

A notable example of Sinclair making hard choices to cut back is its recent decision to suspend its formal relationship with Achieving the Dream.
The split was amicable. But it was still disappointing to Achieving the Dream, said Lincoln.

“They felt like they had been in long enough that they had learned what to do,” Lincoln said of Sinclair. “What they’re doing is really impressive.”

One reason for the departure, Cleary said, was that the group requires colleges to report a large amount of data on an annual basis. Sinclair currently is required to send similar data reports to the feds, the Ohio Board of Regents, and local and national foundations.

“In an environment where we have to use resources as efficiently as possible, it did not make sense for us to continue to commit financial human resources to writing reports and providing data on an annual basis for Achieving the Dream,” Cleary said via email. “Our current student success work has benefited greatly from our early work with Achieving the Dream and we will continue to share learning with the AtD network as opportunities arise.”

Both the college and Achieving the Dream said they plan to maintain ties. For example, Cleary will speak at one of the group’s events this year.

“There’s a rhythm to these things,” said Lincoln, who added that colleges should regularly reassess which projects they do. “That’s the way you can decide what works and what doesn’t work.”

Sinclair has nixed other completion initiatives, sometimes because of lackluster results.

For example, Cleary said the college dropped its experimentation with learning communities — where students work together in group-based learning.
“Maybe we just didn’t resource them the right way,” she said. “It wasn’t working. We pulled the plug.”

That sort of sober honesty appears to have helped with faculty buy-in to the college’s completion push.

Mike Oaster is an assistant professor who teaches emergency medical services and leads Sinclair’s Faculty Senate. He says the college has avoided initiative fatigue and been able to make serious changes in part because faculty members know the completion projects aren’t about chasing fads.

Sinclair’s approach is “not one where we thought the money was going to go away after a couple years,” he said.

For example, the college has worked to reduce the number of credits students must complete in order to earn an associate degree. Now degrees require 60-65 credits, which is fewer than at many two-year colleges.

Cutting credit requirements is not an easy task, and can require the reduction of classes. That can be scary to instructors, Oaster said.
“You’re sawing on a limb and you’re still sitting on it,” he said.

But Oaster said faculty members had confidence in Sinclair’s administrators during that process, believing the goal wasn’t about eliminating faculty jobs.
“It’s working,” he said of the credit reduction work. “We’re getting more people through at a quicker clip.”

It wasn’t always so. Johnson, Sinclair’s president, said Vanguard and other completion efforts were controversial back in the day.

The shift happened around 2005. Unflattering graduation numbers from participation in Achieving the Dream helped create some urgency, Johnson said. And, just as important, after a few years the national projects became integrated into the college’s day-to-day work.

That was the “breakthrough,” said Johnson, where the “not invented here” resistance to projects faded away. “These national partners became a part of us.”

Show Me the Data

In Ohio, as in a growing number of states, colleges now are funded in part based on a formula that factors in completion. Likewise, the Obama administration wants to tie federal funding to performance measures as part of its pending ratings system.

In some ways, Sinclair’s refocusing mirrors that of the Gates Foundation. After seven years of work on completion goals, the mega-foundation announced a set of four policy priorities based on lessons learned from its grant making. Gates also is working on performance metrics it will require colleges to use as part of completion-oriented grant projects.

As state governments, foundations and feds get more aggressive about trying to hold colleges accountable, Sinclair is leaning on Civitas and other data-intensive tools to figure out what works best.

For example, the college is a participant in the Predictive Analytics Reporting (PAR) Framework. The nonprofit group began as a project the Western Interstate Commission for Higher Education managed, largely with funding from Gates. It recently spun off into an independent nonprofit.

The group provides student retention information, based on a huge amount of data points, for its more than 350 participating campuses, ranging from community colleges to research universities. For example, it helps colleges figure out what obstacles prevent students from graduating, and why. Members can compare data across institutions, too.

The goal of the work is to find causation in what is most effective in student interventions, said Russ Little, the PAR Framework’s chief innovation officer, who previously worked at Sinclair. Being able to control for student characteristics is an important feature, he said.

Colleges can use it to figure out if there are “interventions that work for different groups better than others,” Little said.

Sinclair has used PAR and other sources of data to try to better understand the impact of its student success work, Cleary said. For example, early numbers were promising for My Academic Plan (MAP), a student advising effort that combines prescriptive advice for students about their path through an academic program with technology-supported record keeping.

The data showed that students who received one of the plans were 3.4 times more likely to stay in college than were those who didn’t. They were also twice as likely to earn a credential.

“As a result of these and other early metrics, the college redesigned its academic advising system,” said Cleary. “All new students are now assigned an academic adviser who creates an individualized MAP for them and follows their progress to the completion of their credential.”

The completion work is ongoing at Sinclair. After all, almost half of its students are still dropping out before they graduate or transfer. But both faculty members and administrators said they are excited about having moved the needle so far.

“It’s terrific,” said Cleary. “We’re proud to be from Sinclair.”