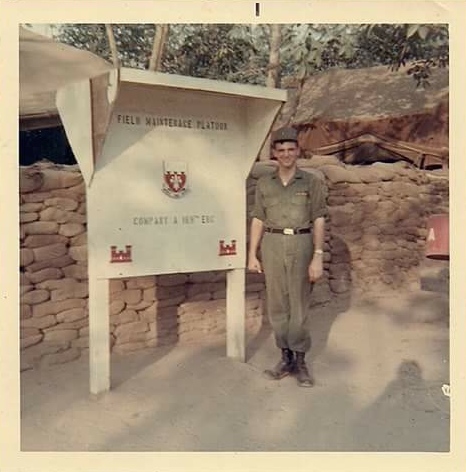 Editor’s note: Veterans Day honors those who have served in the United States military. Many veterans become teachers when they return to civilian life.

Durward Azbell served as a Specialist E-5 in the U.S. Army during the Vietnam War. He worked as a chaplain’s assistant after the war before he became an elementary schoolteacher in Columbus, Ohio, for 36 years.

Growing up in Columbus, Ohio, I always thought that my life was small and unimportant, but things changed when I was drafted and sent to Vietnam.

My own service was in the very secure base of Long Binh in Vietnam. The only danger I saw was when the Viet Cong blew up our ammo dump. I felt that I didn’t deserve the title veteran because I was one of the lucky ones who didn’t have to face combat or die saving others’ lives. Those were the true heroes. The men and women who served in far off places and then returned home and tried to live their lives, spending each day trying to forget the loneliness and separation from loved ones.

I soon found out that time speeds by very quickly. Before I knew it, my three years in the Army were over. I entered college and decided to pursue a career in elementary education.

I never thought of myself as a veteran, just a plain old teacher. There were no lessons or discussions about Vietnam or being a soldier. I was just happy being Mr. Azbell, fourth grade teacher.

Veterans Day and the Vietnam War were not part of the curriculum in the grades I taught. We taught more about the post-period of the Civil Rights Movement. As I look back, my memories of my time teaching and the service were somehow tainted with the reality that although these were portrayed as noble times, the inequality of treatment of the Vietnamese and black people in our own country had a strange familiarity.

If I were to teach a Veterans Day lesson, it would be titled, “Listening to the Silent Voices of War.” Each person has a story to tell.
I think the real lessons I have had to struggle to learn while being a veteran and teacher were how to deal with my own prejudices. I believe all people have some kind of prejudice, be it gender, racial or disability. As a society, we have a history of treating others differently and struggling to change.

My service in Vietnam and teaching in the inner-city helped me to understand that all people are the same with the same needs. It’s not a sin to be prejudice — it’s what you do and change about that kind of thinking.

If I were to teach a Veterans Day lesson, it would be titled, “Listening to the Silent Voices of War.” Each person has a story to tell. They have oral stories, pictures with memories, and things they have never told because the story was too harsh to reveal.

I was the youngest of three children raised by a widowed mother in Ohio. I was nine going on ten when my father committed suicide after an accident left him in severe back pain. He was an enigma to me because I knew he was an Army veteran who served in Germany during World War II, but I never really got to hear his stories or understand him.

As an elementary school teacher, my students and I shared a lot of stories with each other. I believe the time spent teaching children is the best way a person could spend his or her life.

Even now, I sometimes wondered if I had any impact on my students, as some of my teachers had on me. I recall a time I met a student whom I taught several years earlier. He immediately knew who I was. During our conversation he stated that it was because of my helping him to memorize multiplication tables that he was able to master how to multiply large numbers. It was one small thing that made a big difference. He thanked me for remembering him.

I have almost all the class pictures the school took each year. The shame is I remember some of their names but have forgotten so many.

I am humbled and honored to think that anyone would find my life interesting. All people deserve to have their story told, especially veterans who are united in a common cause to bring peace to those who suffer during wars.