Voters support public preschool, but will candidates do the same?

Presidential candidates hoping to attract Millennials, Hispanics and swing state voters in 2016 could be well-advised to make early education a key part of their education platform, according to the results of a new national poll showing that 76 percent of voters support the idea of spending federal money to expand public preschool. 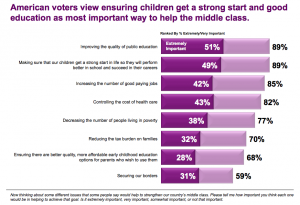 Commissioned for the third year running by the D.C.-based early childhood advocacy organization, First Five Years Fund, this year’s poll included several new questions including one on how favorably respondents would view a candidate interested in increasing funding for early childhood programs. Fifty-four percent said they would hold a more positive view of such a candidate.

“It’s polling so well that there’s little downside to running on it,” said Kris Perry, executive director of First Five Years Fund. “Based on the evidence, I hope a couple of them–someone on each side–will take it up.”

Fifty-nine percent of Republicans, and 94 percent of Democrats, polled said they’d support spending federal money to expand public early education programs. (Three of the many foundations that support First Five Years Fund, the Bill & Melinda Gates Foundation, the W.K. Kellogg Foundation, and the Heising-Simons Foundation, are also among the various funders of The Hechinger Report.)

Before launching her presidential campaign, Hillary Clinton spent months traveling the country as the face of Too Small To Fail, a Bill, Hillary and Chelsea Clinton Foundation campaign to increase parental knowledge of early learning at home.

While none of the Republican candidates have made the issue central to their campaigns, former Florida Gov. Jeb Bush, Ohio Gov. John Kasich, Louisiana Gov. Bobby Jindal and New Jersey Gov. Chris Christie all lead states with public preschool programs, some of which grew under their leadership. 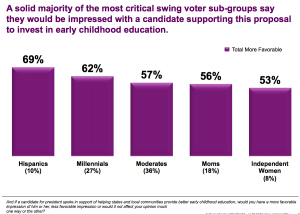 In addition to its direct political findings, the poll found that 88 percent of respondents agreed (66 percent strongly) with the statement “Access to quality early childhood education is not a luxury, but a need for many families.” And 89 percent of respondents ranked “making sure that our children get a strong start in life” as important (49 percent said “extremely important”) to strengthening the country’s middle class. But the questions did not get much more detailed than that.

Laura Bornfreund, deputy director of the early childhood initiative at New America, a public policy think tank, said she wished the poll had asked specific questions about trade-offs voters would be willing to make in exchange for more early childhood care. “If there is a larger investment at the federal level, then it either means something else is going to be cut or not invested in or there will be some sort of tax increase,” she said. “But there weren’t questions that really hit that home.”

Bornfreund said she was pleased to see that early childhood education was popular among voters and hoped presidential candidates would take it as a suggestion to focus on the issue in the coming year. Even if early education makes a bigger splash during this year’s campaign than it has in the recent past, it’s unlikely to beat 1988, said Helen Blank, director of childcare and early learning at the National Women’s Law Center.

“Childcare in 1988 was actually one of the key issues,” said Blank, who has worked for organizations promoting higher quality childcare for decades. “There was a bill going to Congress; it was all over the papers and both candidates were talking about it.”

That bill, which would have increased childcare subsidies for low- and moderate-income families, failed. And while Blank says every serious presidential candidate since has had a plan for early education, the conversation has never reached such a fever pitch, nor does she expect 2016 to break that pattern.

This story was written by The Hechinger Report, a nonprofit, independent news organization focused on inequality and innovation in education. Read more about early education.