“There’s a teacher right now in urban America who’s going to teach for exactly two years and he’s going to leave believing that these young people can’t be saved,” says Dr. Chris Emdin, associate professor at Columbia University’s Teachers College. “So he’s going to find another career as a lawyer, get a job in the Department of Education or start a charter school network, all based on a notion about these urban youth that is flawed. And we’re going to end up in the same cycle of dysfunction that we have right now. Something’s got to give.”

Emdin, who is also the university’s associate director of the Institute for Urban and Minority Education, has had enough of what he calls a pervasive narrative in urban education: a savior complex that gives mostly white teachers in minority and urban communities a false sense of saving kids.

“The narrative itself, it exotic-izes youth and positions them as automatically broken,” he says. “It falsely positions the teacher, oftentimes a white teacher, as hero.”

He criticizes the “white hero teacher” concept as an archaic approach that sets up teachers to fail and further marginalizes poor and minority children in urban centers. In “For White Folks Who Teach in the Hood … and the Rest of Y’all Too,” his new book released this month, Emdin draws parallels between current urban educational models and Native American schools of the past that measured success by how well students adapted to forced assimilation. Instead, he calls for a new approach to urban education that trains teachers to value the unique realities of minority children, incorporating their culture into classroom instruction. I talked with him about the book and why he says the stakes are too high to continue with the status quo.

What are we getting wrong about white teachers and urban education? 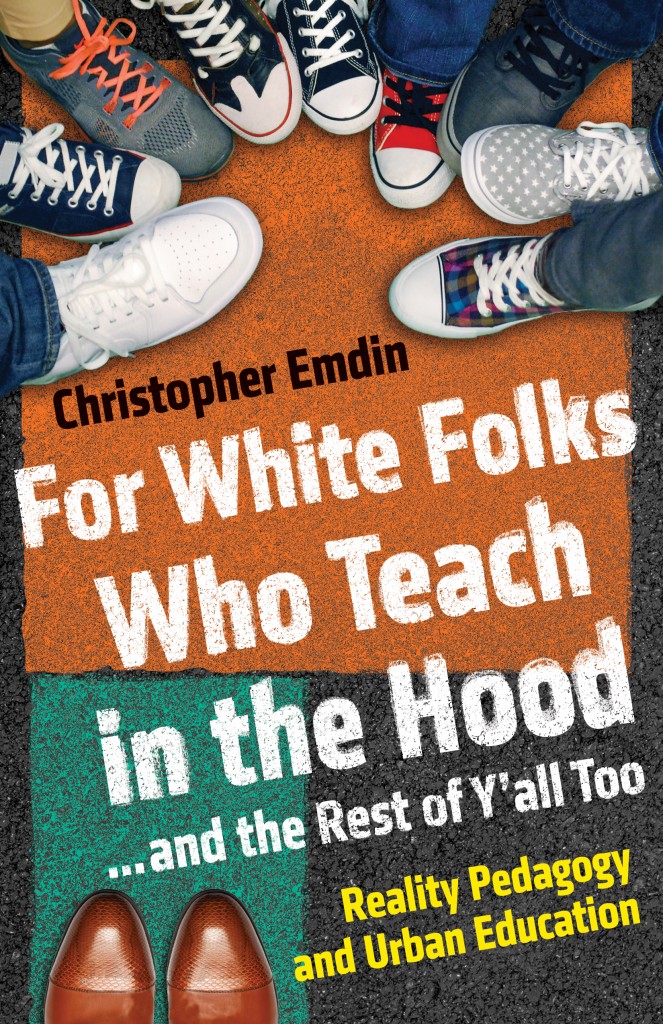 I think framing this hero teacher narrative, particularly for folks who are not from these communities, is problematic. The model of a hero going to save this savage other is a piece of a narrative that we can trace back to colonialism; it isn’t just relegated to teaching and learning. It’s a historical narrative and that’s why it still exists because, in many ways, it is part of the bones of America. It is part of the structure of this country. And unless we come to grips with the fact that even in our collective American history that’s problematic, we’re going to keep reinforcing it. Not only are we setting the kids up to fail and the educators up to fail, but most importantly, we are creating a societal model that positions young people as unable to be saved.

I always ask my teachers why do they want to teach and I can tell by their responses how closely the white savior narrative is imbued in who they are or who they want to be. I always say, if you’re coming into a place to save somebody then you’ve already lost because young people don’t need saving. They have brilliance, it’s just on their own terms. Once we get the narrative shifted then every teacher can be effective, including white folks who teach in the hood.

But is it really a race thing? Is it only white teachers?

I know that folks hear that title and get upset. I’ve got folks who say to me “that’s inherently racist.” But no, because it’s a reality. The overwhelming number of teachers in an urban setting are white, come from different communities and are of different socioeconomic classes. Why can’t we name that? If we don’t name that then we’ll continue to have this disconnect between teachers and students. I want white teachers to teach in the hood, believe or it not. I’m for that. But I want them to do it in a way that makes them effective and not burnt out. Or have them do it and not think negatively about young people. Too many are teaching in the hood for 2 or 3 years, having bad experiences teaching students of color, leaving, then ending up being a lawyer or policy maker who inherently has these biases against young people of color. That reinforces the flawed structures that we have in place already. I’m about teachers being trained to be effective regardless of race.

Is hiring more teachers of color the solution?

Part of a system of oppression is allowing the folks who have the power to create change feel as though they’re responsible for keeping the narrative. So a lot of black teachers go into urban schools and within the first 3 months they become the king or queen of discipline. Why? Because the system sees a black face as a person who’s supposed to help them meet their goals. But I don’t want to meet those goals; I want kids to feel free. I want those kids to feel what emancipation is like in those classrooms, to feel like they can be themselves, their culture to be expressed. Just a black face in the classroom helps the kids to connect, but it’s not enough if that black person feels their role is to be the enforcer of a white folk’s pedagogy.

You propose something called “reality pedagogy,” but what is it?

Once teachers believe that, they can enact this first of what I call the 7 C’s: a co-generative dialogue which, in many ways, takes the structure of hip-hop cipher. They then learn to co-teach so kids can teach the classes along with their peers. Teachers can develop cosmopolitanism which allows students to feel they’re responsible for the classroom and the operations of the class. You can focus on context, which is learning the environment and the neighborhood the kids come from and how you can incorporate that into the classroom. Then you can focus on content which is knowing that you don’t know all the answers. A child would rather learn from somebody who can say “here is where my content expertise ends so let’s learn together” as opposed to someone saying “you must learn what I know.”

After content is competition. And finally there’s curation. It’s really an opportunity for the teachers to be able to research their own practice, take video of themselves and have kids give them feedback. It’s collecting artifacts from teaching and learning to teach better in the future.

Tell us about your teacher workshops. How are white teachers learning to move beyond the savior complex?

I bring teachers into the communities of their students: a barbershop, a black church and even hip-hop ciphers. It’s having teachers understand that it’s not them going to see the “exotic other” in their own element, but rather, an opportunity for them as teachers to learn about the students. Teachers go in there with notebooks, a pen and pad in hand and are really prepared to learn. They look at the preacher and his voice inflections, the way his hands move and how that garners a response from the audience. It’s a structured sermon but he’s allowing the audience to walk freely around and be creative.

They get a feel for the teaching and learning that is going on in these places. It’s the idea of a teacher ever growing, not always feeling like they have all the information, never feeling like once they have their master’s degrees in education that that’s where the learning ends. It’s knowing that being a teacher means being an active learner about the students’ lives. And sometimes being an active learner of students’ lives means stepping outside of the classroom and into their students’ community.

What are the risks of continuing urban education as is?

The repercussions are around us every day from criminal justice to engagement with the political process, to higher incarceration rates and low graduation rates. The outcomes are right in our faces today. I’m not absolving communities from blame or parents from blame. But we know that schools that have more zero tolerance policies, youth are more likely to get involved with the criminal justice system. We know that schools that have these hyper rigorous approaches to pedagogy, youth are less likely to take advanced placement classes. So the place where the magic should happen is inside the classroom.

It’s not a tale of doom and gloom. I’m simply saying this is why it’s bad but there’s a way forward. And the way forward doesn’t cost a million dollars! It doesn’t require you to give an iPad to every kid in the school district or a $3 million grant. It’s free! Teaching differently is free. Going into the communities and finding out how to do things better is free man! It’s not an issue of finance or an issue of wealth. It’s an issue of identifying that what we’ve been doing before just ain’t working.

NewsHour joined Emdin before in his New York City classroom for a look at how teachers use hip-hop to teach complex science. You can check out the story here, or watch it below.