What you need to know about the Oklahoma teacher walkout

Thousands of union and non-union teachers lined up around the Oklahoma state capitol building Monday morning to demand higher raises and more funding for their schools.

The walkout forced around 200 school districts to close, according to The Oklahoman’s Ben Felder. That’s close to half of the 512 districts in the state. It’s the first time the state’s teachers have walked out of school in nearly 30 years. By midday Monday, Oklahoma City and Tulsa public schools indicated they would also close facilities on Tuesday, signaling a second day of protests ahead.

How we got here:

The Oklahoma Legislature passed a bill last week that included an average pay raise of $6,000 for educators and $50 million dollars more in education funding. A $1,250 increase for support staff and a raise for state employees was also a part of the bill.

The last walkout was in 1990, before one of the key non-union organizers, Alberto Morejon was born.

The measure was a “good first step,” Alicia Priest, president of the Oklahoma Education Association (OEA) told the PBS NewsHour. But it didn’t go far enough, she said. As teachers walked out on Monday, the union demanded a $10,000 pay increase over three years for every teacher, a $5,000 increase for support staff and a pay raise for state employees, as well as $200 million dollars in additional funding for schools. The bill that passed last week only partially met the teachers’ demands.

On Monday, teachers descended on the state Capitol building in an attempt to meet with their legislators. The walkout is the first time many of Oklahoma’s educators are on the front lines fighting for pay raises and money for their schools. The last walkout was in 1990, before one of the key non-union organizers, Alberto Morejon was born.

“Today is Day 1 of however long it will take to solve the long-term funding crisis in Oklahoma, so our kids can have a bright future,” said 24-year old teacher Morejon, who started a Facebook group “Oklahoma Teacher Walkout – The Time Is Now!” in early March.

A history of low pay: 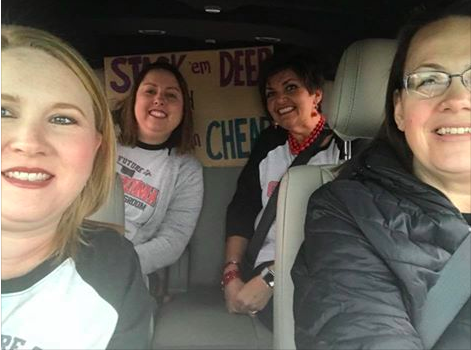 Oklahoma teachers headed to the capital of Oklahoma City on Monday to protest low salaries and a lack of funding for schools. Photo courtesy of Melissa Woods

Until Republican Gov. Mary Fallin signed the bill into law Thursday, teachers in Oklahoma were the lowest paid in the U.S. and hadn’t seen a raise in a decade. In 2016, the median household income in the state of Oklahoma was $48,038, according to the U.S. Census Bureau. According to minimum state salary requirements in Oklahoma, a teacher with a doctorate degree and 25 years of experience could earn a salary of $46,000 for the 2017-2018 school year.

In a Facebook video on Sunday, Priest discussed teachers who go to food pantries to feed their families and donate plasma to make ends meet and whose students use outdated textbooks that are duct taped together.

How is the state responding?

Last Thursday, Fallin tweeted that she was “pleased to sign three bills today that are part of an historic revenue package to fund the largest teacher pay raise in state history,” adding that the state “will move to second-highest in the region, up from the lowest, in average teacher pay.”

Fallin had not publicly commented on this week’s walkout until early Monday evening, saying in a statement that she appreciated teachers coming to the capitol today and that she has supported teacher raises for the past three years.

“Just like Oklahoma families, we are only able to do what our budget allows,” Fallin said, adding that other areas like corrections and health care should not be neglected as additional education funding is considered.

State Sen. Joseph Silk wrote on Facebook last week that while he supported teachers and public education, he voted against the bill, because it did not include “any type of long term reforms to our States’ skewed tax structure, out of control spending problems, or structural budget issues.”

He added that he was “exceptionally frustrated with many of our public educators, who radically and vocally turned against all common sense, principled measures, measures which could have increased funding to their industry and instead threw all their support behind a huge money grab tax increase on the backs of hard working Oklahomans.”

“I really wish that the Oklahoma Education Association [and other teachers] … would have gotten behind some more common sense fiscally responsible measures instead of just saying, hey, raise taxes on everybody so we can have basically a higher paycheck,” he told NPR.

Joy Hofmeister, the state’s superintendent of public instruction, tweeted that she was joining teachers at the state Capitol on Monday.

What other sources of revenue could help school funding? 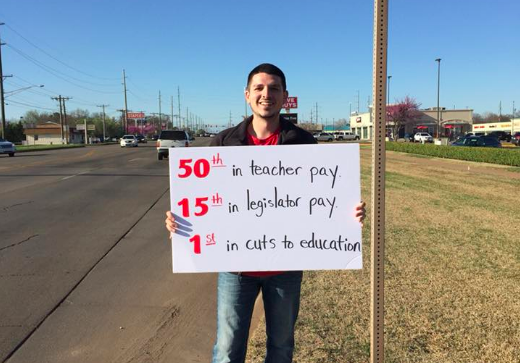 Days after the bill was voted on, state House lawmakers appealed to remove a $5 hotel tax that could have garnered as much as $50 million dollars, citing concerns over a negative impact on tourism in the state, local station KFOR-TV reported.

“It’s these kinds of political stunts and years of irresponsible budgeting that got us in this mess to begin with,” Priest said.In addition to reinstating the hotel tax, Priest said, two other revenue streams could be achieved by instituting a “ball and dice” tax on gambling and passing the capital gains tax break. Proposals for each of these revenue sources have yet to pass through both chambers of the Oklahoma legislature.

After the bill’s passage last week, Republican Rep. Pat Ownbey suggested to the NewsHour that it would be tough to pass the bill again if the Senate sent it back to the House.

“It’s such a delicate thing to get Republicans and Democrats to agree,” Ownbey said. “We haven’t seen this in 30 years. I’m not sure we can get it back again.”

Several school districts around the state cancelled classes indefinitely beginning on Monday, while others closed school at least through Tuesday as the walkout continues. Some districts had announced additional closures, but reversed their decision when the legislature passed the salary increase last week.

READ MORE: Why Oklahoma teachers are planning to walk out Monday

Teachers in several states across the country, inspired by a successful strike in February in West Virginia, are also protesting for better salaries and funding for their schools. Kentucky teachers called in sick on Friday after lawmakers made last minute changes to their pensions and Arizona teachers say they will also strike if they do not receive a pay raise.

Silk told NPR he did not envision the legislature gathering to address the issue again.

“Just from my perspective, you know, we just passed a $447 million tax increase, so that’s a substantial amount of revenue for one year. So I don’t see the lawmakers doing anything anything else this year regarding education funding,” he said.

Left: Natalie Armstrong (left) and her two daughters Payton and Payzlyn, along with her mother Katrina Sinor rally along with thousands of teachers at the state capitol on April 2, 2018 in Oklahoma City, Oklahoma. Photo by J Pat Carter/Getty Images.