Why Oakland teachers are on strike

OAKLAND, Calif. — Teachers in Oakland, California, went on strike Thursday, part of a national wave of discontent by educators over classroom conditions, pay and other issues. Recent walkouts have taken place in West Virginia, Los Angeles and Denver.

The city’s 3,000 teachers want a 12 percent retroactive raise covering 2017 to 2020 to compensate for what they say are the among the lowest salaries for public school teachers in the expensive San Francisco Bay Area. They also want the district to hire more counselors to support students and more full-time nurses.

Kindergarten teacher Kaki Blackburn, 30, was among dozens picketing outside Manzanita Community School with signs saying “On strike For a Living Wage.”

Blackburn, who has 29 kids in her class, said her main concerns were class size and wages. She said her salary makes it impossible to afford an apartment on her own. 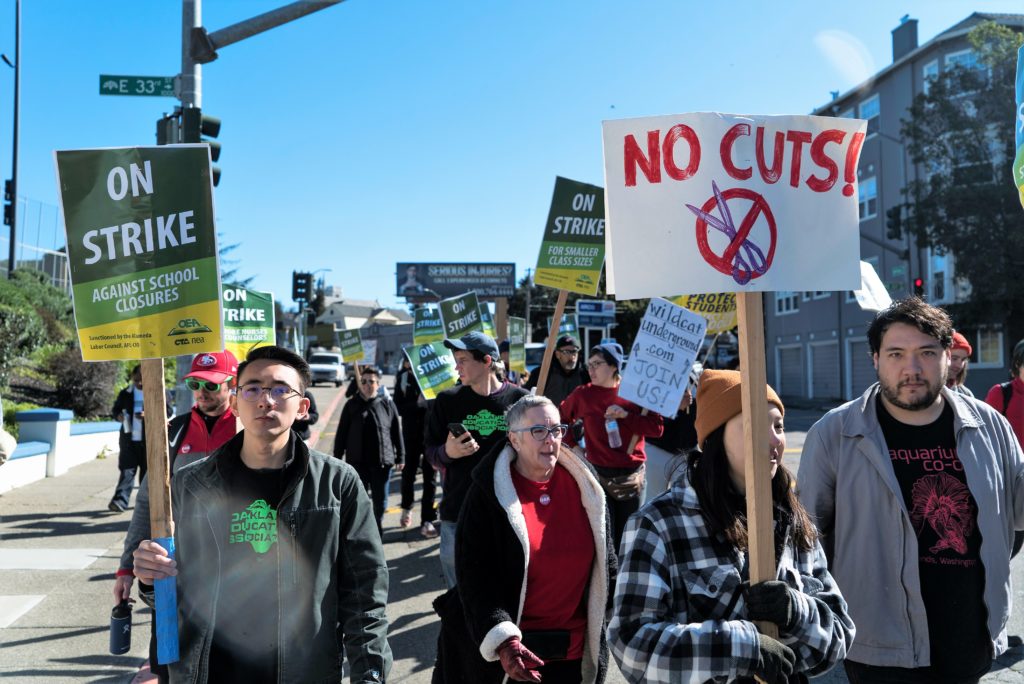 Student photographers at Youth Beat, a PBS NewsHour Student Reporting Lab in Oakland, California, captured the first day of the teachers’ strike. Vernajah Walker is a junior at Oakland Technical High School who is being affected by the strike, and Narcelito Guinto Jr. is a high school graduate and youth producer with Youth Beat.

“There’s no way I’d be able to live here without a roommate,” she said. “This is not what I went to Brown University to get a master’s for.”

The union leader said the educators were forced to strike because administrators did not listen to their demands for two years.

“For two years we have been negotiating with the Oakland Unified School District to make our students a priority over outside consultants and central office administrators,” said Oakland Education Association President Keith Brown.

The district initially offered a 5 percent raise covering 2017 to 2020, saying it is squeezed by rising costs and a budget crisis. 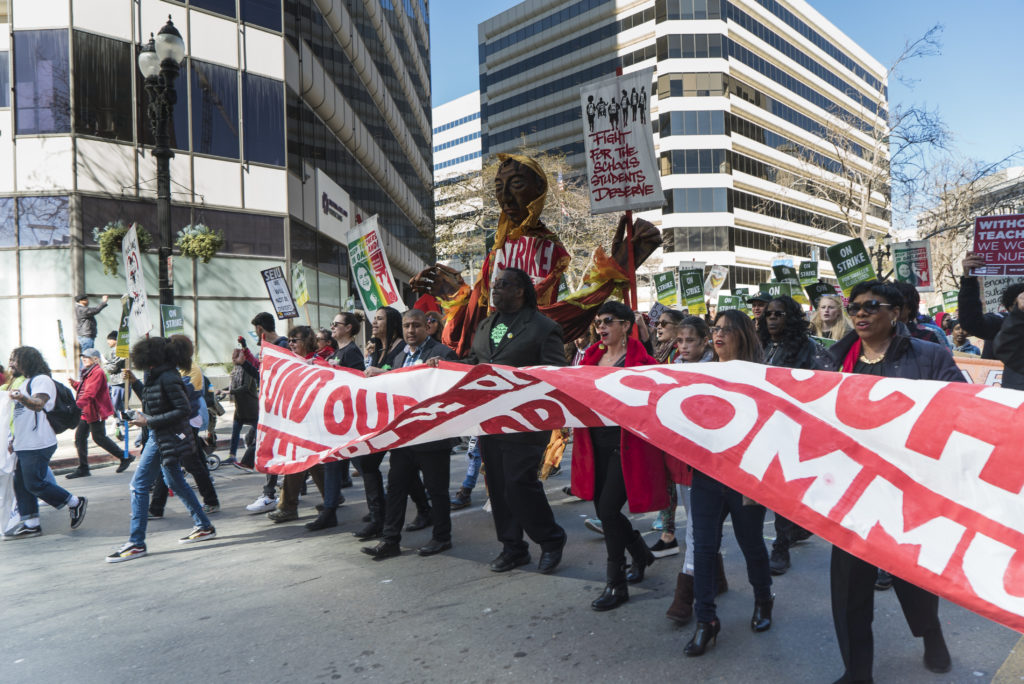 In negotiations Wednesday aimed at averting a strike, the district increased its proposal to a 7 percent raise over four years and a one-time 1.5 percent bonus. The offer went higher than the recommendation of an independent fact-finding report that suggested a compromise 6 percent retroactive raise.

But union officials rejected the offer.

“We haven’t heard any proposal since last May so we’re hoping they have something for us when we meet tomorrow,” Sasaki said.

Teachers have been working without a contract since 2017 and have said their salaries have not kept up with the cost of living. 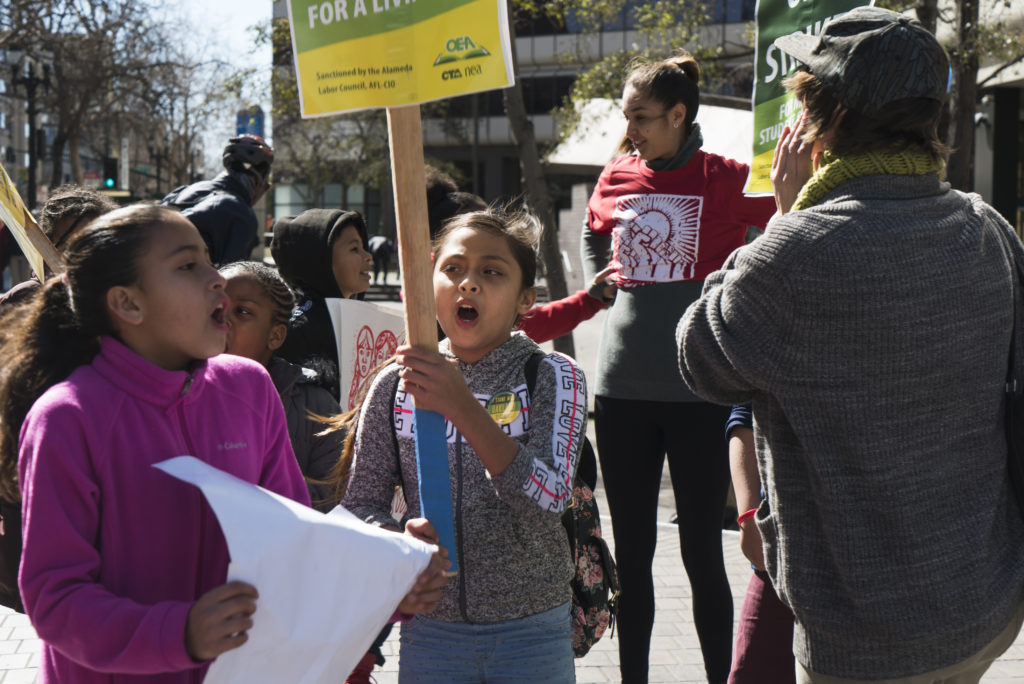 Groups of students and youth joined the strike in support of Oakland teachers. Photo by Narcelito Guinto Jr./ Youth Beat

The district said schools would remain open, staffed by non-union employees and substitute teachers. However, parents should not expect teaching as usual, it said.

Manzanita Principal Eyana Spencer said 14 of the school’s 450 students turned up for school Thursday and were placed in one classroom to play games.

Thousands marched to city hall for a rally, chanting “We are Oakland!” Some held signs saying “Kids Deserve Better.” 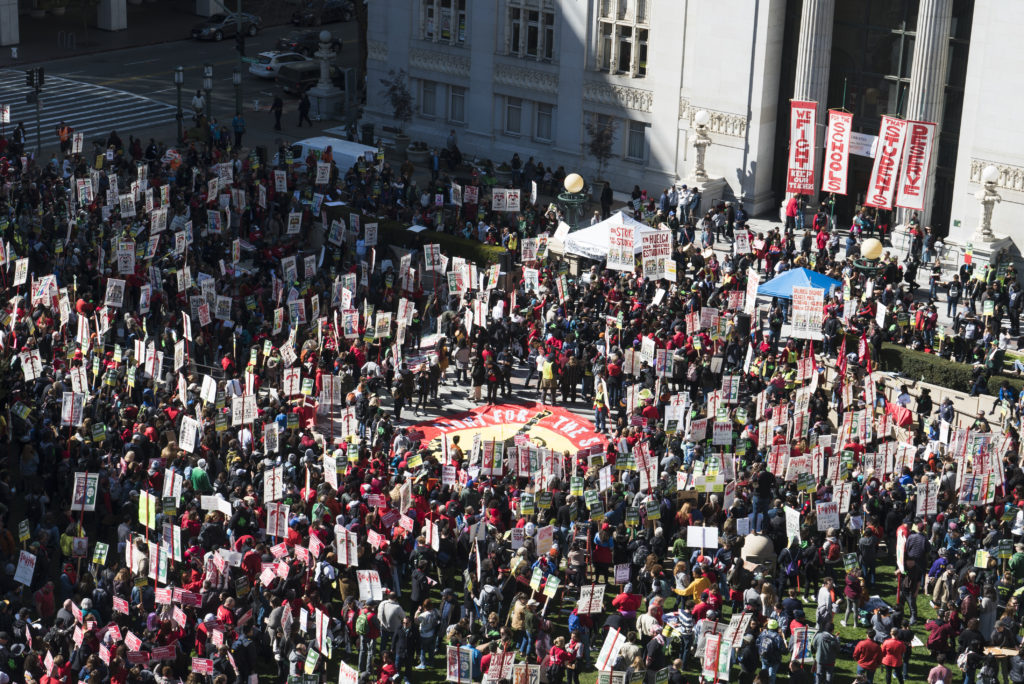 Teachers and protesters from across Oakland gathered at City Hall for a rally in support of higher teacher pay. Photo by Narcelito Guinto Jr. / Youth Beat

“If teachers are worried about how to pay their bills how can they focus on a lesson plan?” said Viviana Rodriguez, whose fifth-grade son joined her at the protest.

Nearly 600 teachers left their jobs at Oakland public schools last year, according to the union, which has said the district cannot retain teachers or attract experienced new teachers.

The union has also called for the district to scrap plans to close as many as 24 schools that serve primarily African-American and Latino students. The union fears further students will be lost to charter schools that drain more than $57 million a year from the district.

Recent strikes across the nation have built on a wave of teacher activism that began last spring. Unions for West Virginia teachers, who staged a nine-day walkout last year, ended another two-day strike Wednesday. Last week, teachers in Denver ended a three-day walkout after reaching a tentative deal raising their wages.

Teachers in Los Angeles, the nation’s second-largest school district, staged a six-day strike last month that ended when they settled on a 6-percent raise with promises of smaller class sizes and the addition of nurses and counselors.

Jocelyn Gecker and Olga R. Rodriguez from the Associated Press and students from the PBS NewsHour Student Reporting Labs reported from San Francisco.