Thirty years ago, after experiencing the tragic death of a loved one, one of my friends consoled me with the following odd set of sentences:

“You’ll get over your grief, Howard. Everyone does. Unless he is Queen Victoria.”

Instantly, an image of the heavyset, grimacing Queen appeared in my mind’s eye. This strange condolence made me smile in my darkest hour because, as well known to every English monarchy buff, Victoria dressed in widow’s black from the day her beloved husband, the Prince Consort Albert, died in 1861 until her death on January 22, 1901.

I recall this moment because Dec. 14 is the 156th anniversary of Prince Albert’s death.

For more than a century, Albert’s demise was attributed to typhoid fever. But more recently, doctors and armchair pathologists have argued that it was something more.

For more than a century, Albert’s demise was attributed to typhoid fever. More recently, however, a parade of doctors and armchair pathologists have argued that it was something more than an infection that carted the prince away.

The scene of Albert’s death was the royal bedroom in the stately Windsor Castle on the Thames. A lithograph by W.L. Walton (after a painting by Oakley) committed the event to paper and features a distraught Queen Victoria and Albert’s physicians, Dr. William Jenner, Sir James Clark (who treated John Keats on his deathbed, in Rome, 41 years earlier), Sir Henry Holland and Dr. Thomas Watson. It was here where the 42-year-old prince consort died after a four-or-more-week illness, one that may have begun in early-to-mid-November with vague symptoms of insomnia, leg and arm pain, loss of appetite, and a generalized feeling of simply not feeling well.

The details released to the press about the prince’s illness were incomplete, vague and imprecise. In real time, however, the Royal Family worried that Albert was suffering from “gastric” or “low” fever, both euphemisms for the deadly and still mysterious typhoid fever. This infection is typically caused by the ingestion of water or food tainted with a microbe known as Salmonella typhii. In the era before antibiotics and intravenous fluids, a bout of typhoid typically lasted 21 to 30 days, and either ended in death or, if the body was strong enough to fight off the microbial assault, a slow and steady recovery. The characteristic symptom is a rose-colored skin rash erupting between the 8th and 12th day of illness. Other symptoms include fever, abdominal pain and bloody diarrhea. 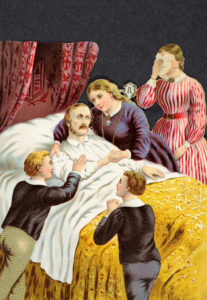 Prince Albert, the Prince Consort, with Queen Victoria and several of his children at Buckingham Palace, London on 14th December 1861. Photo by Popperfoto/Getty Images.

Oddly, several weeks before Prince Albert’s demise, he articulated an ennui of depression, if not a distinct desire to die. He candidly told Victoria, “I do not cling to life. You do; but I set no store by it. If I knew that those I love were well cared for, I should be quite ready to die tomorrow … I am sure if I had a severe illness, I should give up at once. I should not struggle for life. I have no tenacity for life.”

Dr. William Jenner, Albert’s consulting physician, was particularly adept at the management of typhoid fever and made the diagnosis in the royal patient. Jenner was the author of the well-regarded 1850 text, “On the Identity or Non-Identity of Typhoid and Typhus Fever.” According to Dr. Jenner’s clinical notes, the pink rash of typhoid appeared on the prince’s skin on Saturday, Dec. 7, but Albert was never told of the severity of his illness because, as Victoria recorded, “he had a horror of fever.”

During his last week of life, Albert grew progressively more disoriented and dehydrated. He also had trouble breathing and was coughing a lot. It was during this period when a slew of often contradictory press reports on the prince’s condition began to be appear in print. The rapidity of increasingly worse news bulletins made the illness seem far more rapid than it actually was. Indeed, the venerable medical journals, The Lancet and the British Medical Journal, complained about the many discrepancies in information released from Windsor Castle and called for formal inquiries into the entire matter.

In the end, royal grief trumped the public’s right to know about the health of their leaders.

The death of such a popular figure and esteemed leader presaged the public outpouring of sympathy seen in 1997, when Princess Diana was killed in an automobile accident. In the end, royal grief trumped the public’s right to know about the health of their leaders, a theme that, too often, continues to this day. The British Medical Journal reported that the prince’s disease was “the very offspring of foul sewers and ill-drained dwellings.” Interestingly, the word typhoid was not officially attached to the clinical picture until Dec. 21, 1861, when “typhoid fever; duration 21 days” was listed by the Registrar-General as Albert’s official cause of death.

In recent years, physicians have argued over what killed Prince Albert. Apparently, he had a lengthy medical history of intermittent abdominal cramps, occasional intestinal obstruction, anorexia, diarrhea, fatigue and rheumatic joint problems. While some have hypothesized various forms of abdominal cancer (his mother died of stomach cancer at the age of 30), some physicians and historians have argued that Albert may have suffered from either Crohn’s disease or ulcerative colitis, complicated by a perforation of the bowel, sepsis and death. In the end, we will never really know, although we can all agree that poor Albert died prematurely.

During their marriage together, Victoria was deeply devoted to Albert and allowed him to play a major role in governing her kingdom. Regardless of the cause of Albert’s death, it inspired Queen Victoria to “lean in” and become the beloved, decisive and effective Queen of the United Kingdom of Great Britain and Ireland, and Empress of India. Victoria may have worn the widow’s black for more than 40 years, but she was a woman who took charge and ruled over one of the most glorious eras of humankind — one we still refer to today as the Victorian Age.