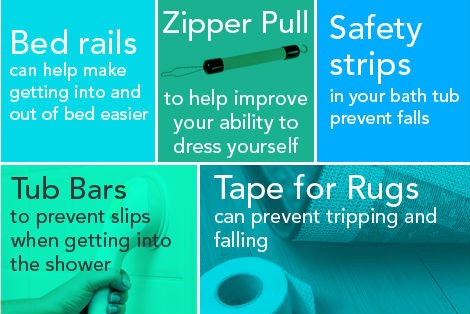 “Life hacks” are little tricks and tips that helpmake life more efficient in some way. On Aug. 8 we published a list of seven life hacks, and since then readers have added several of their own. Graphic by Elizabeth Shell.

Earlier this month PBS NewsHour took viewers to Boston, where an organization in the neighborhood of Beacon Hill has become a national model for helping seniors maintain independence in their own homes and avoid moving to retirement communities. The group provides supportive services ranging from basic assistance like changing light bulbs to transportation to doctors’ appointments and even social outings to the symphony.

The philosophy is that most people are healthier, happier and more productive in the long-run if they can “age in place” in familiar surroundings. And often, the tricks to make that a reality are pretty simple.

To go along with this story, the NewsHour partnered with Allyson Evelyn-Gustave, a senior occupational at the School of Nursing at Johns Hopkins University to compile “Seven Life Hacks to Keep You Out of the Nursing Home.” A “life hack” is a simple tool or trick that some people find make a big difference in their lives. Evelyn-Gustave and several other Hopkins employees are helping implement these changes throughout Baltimore as part of the CAPABLE project, aimed at helping low-income seniors “age in place.”

After reviewing her original list, many NewsHour viewers added some “life hacks” of their own to the discussion. Here are 19 more simple fixes and tricks that could help keep you out of the nursing home: From viewer Mary Guercio:

Do you have more “life hacks” for maintaining independence longer? Leave them in the comments section below.