Americans should not smoke e-cigarettes, the Centers for Disease Control and Prevention warned Friday, as they investigate how hundreds of people became sick, and at least three people died, after using them.

“While this investigation is ongoing, people should not use e-cigarette products,” Dana Meaney-Delman of the CDC said in a call Friday. That broad recommendation is because “there is a diversity of products” related to e-cigarettes, some containing THC, or tetrahydrocannabinol, marijuana’s primary psychoactive component, and some containing nicotine, she said.

As many as 450 people, including 215 cases formally reported to the CDC, in 33 states have reported possible pulmonary disease after using e-cigarette devices, liquids, refill pods and cartridges. Symptoms of this pulmonary disease include shortness of breath, fatigue, fever and nausea or vomiting. Investigators must eliminate other causes of illness, aside from e-cigarette use, Meaney-Delman said. She is the incident manager who is overseeing efforts to track, understand and respond this pulmonary disease for the CDC.

“While this investigation is ongoing, people should not use e-cigarette products.”

The medical community is gathering more information to understand why people are getting sick and dying, and “no definitive causes have been established,” Meaney-Delman said.

Many chemicals and additives are present in e-cigarettes, according to officials on the call. They do not know what chemicals, or combination of chemicals, could lead to getting sick and dying.

The findings are preliminary, said Jennifer Layden, chief medical officer and state epidemiologist for the Illinois Department of Public Health where one of the confirmed deaths has occurred. She said an increase of cases began to appear in May and June, compared to the previous year, suggesting something new is happening. In Illinois, X-rays revealed abnormalities in patient lungs, and nearly all patients were hospitalized, Layden said.

It’s premature to know what is causing these illnesses, Meaney-Delman said, and that is why public health officials from the CDC, the Food and Drug Administration and local and state health departments “are working around the clock” to understand what is happening.

So far, officials have collected more than 120 samples, and researchers in FDA laboratories are testing these samples for a broad range of chemicals, including nicotine, THC, opioids, poisons and toxins, said Mitch Zeller, who directs the FDA’s Center for Tobacco Products. He said “no one compound” has been tied to all of these illnesses.

CDC officials on Friday released criteria to help physicians identify cases of pulmonary disease linked to e-cigarette use. Patients who used e-cigarettes in the last 90 days, had abnormalities in chest x-rays but showed no sign of infection, along with no medical record of other possible diagnoses, could be considered confirmed cases, according to the latest CDC guidance. Some patients reported that symptoms developed after a few days, while others said they noticed symptoms weeks after, the CDC said. 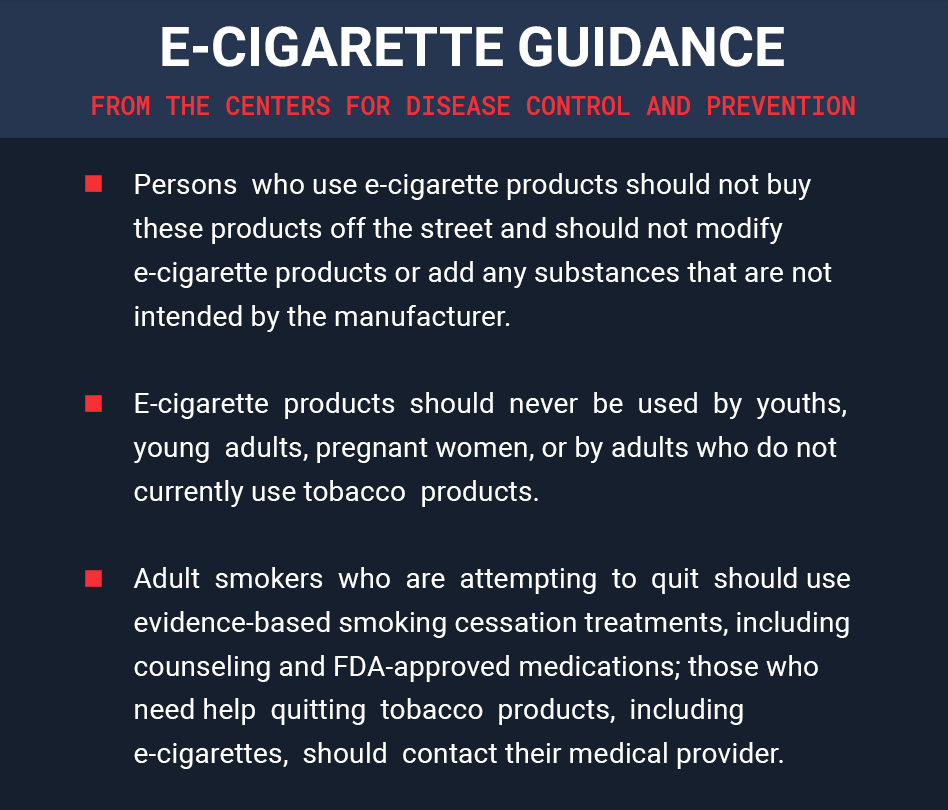 At least 10.8 million adults are estimated to use e-cigarette products in the U.S., according to 2016 data reported in the Annals of Internal Medicine. Of those, 15 percent said they had never smoked cigarettes.

E-cigarettes are the most common way U.S. teens use tobacco, according to a 2018 study by the Department of Health and Human Services.

In recent years, teen use has climbed dramatically, the National Institute on Drug Abuse reported in its Monitoring the Future survey, released in 2018. Among 12th graders, 37 percent of respondents said they had vaped in the last year–up from nearly 28 percent who said they had a year earlier.

The FDA encourages people to submit reports of illnesses that may be related to this disease to FDA Safety Reporting Portal at www.safetyreporting.hhs.gov.

Left: As many as 450 people, including 215 cases formally reported to the CDC, in 33 states have reported possible pulmonary disease after using e-cigarette devices, liquids, refill pods and cartridges, the CDC reported.