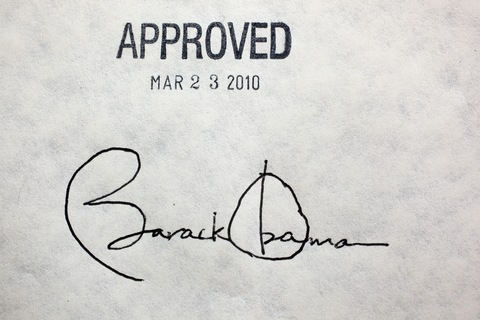 Challenges to the legality of the health reform bill signed into law by President Obama last year are moving closer to the Supreme Court. White House Flickr photo by Chuck Kennedy

In a mixed decision, the three-judge panel dealt a heavy blow to the law by saying that Congress violated the Constitution by passing legislation that would force all Americans to buy a product or pay a penalty. But the court also ruled that the rest of the health reform law should be allowed to stand.

The individual mandate remains the overhaul’s central pillar — a feature the Obama administration hopes will help spread costs in the insurance industry and help keep down prices across the board in the long term.

“This economic mandate represents a wholly novel and potentially unbounded assertion of congressional authority: the ability to compel Americans to purchase an expensive health insurance product they have elected not to buy, and to make them re-purchase that insurance product every month for their entire lives,” the court wrote.

There have been at least 26 federal lawsuits seeking to overturn the health reform law. In the six biggest decisions, three panels of judges have supported the constitutionality of the law, and three have ruled against it — with one major appellate decision expected any day from an appeals court in Richmond, Va.

Both sides pledge to take the issue all the way to the Supreme Court, which may decide to take up the case as early as this fall.

The 11th Circuit Court sided with 26 states — mostly led by conservative governors and attorneys general — who are asking for the law to be blocked in its entirety. Their primary argument is that that forcing Americans to buy health insurance oversteps the bounds of the Commerce Clause in the Constitution, which allows the government to regulate economic activity. But the decision to forgo health insurance is not an economic activity and can’t be regulated, they say.

Chief Judge Joel Dubina and Circuit Judge Frank Hull agreed that Congress cannot use the Commerce Clause to justify a mandate that “individuals enter into contracts with private insurance companies for the purchase of an expensive product from the time they are born until the time they die.”

The 11th Circuit is considered one of the most conservative in the nation — though none of the three judges are known for being particularly partisan. Their decision partially overturns the lower court ruling by Florida Judge Roger Vinson, who said that the individual mandate is not only unconstitutional but represents such an integral part of the reform law that the entire law would need to be disassembled.

Circuit Judge Stanley Marcus sided with the Obama administration that the government has the authority to force the purchase of insurance.

Marcus said his fellow judges “ignored the undeniable fact that Congress’ commerce power has grown exponentially over the past two centuries and is now generally accepted as having afforded Congress the authority to create rules regulating large areas of our national economy.”

White House officials have long contended that the overarching and interconnected nature of health care system impacts every American – and that going without health insurance is as much an economic decision as purchasing it.

“Individuals who choose to go without health insurance are making an economic decision that affects all of us — when people without insurance obtain health care they cannot pay for, those with insurance and taxpayers are often left to pick up the tab,” Stephanie Cutter, a deputy senior adviser to the president, wrote in a blog post shortly after the ruling became public. “We are confident it will not stand.”

Simon Lazarus, a public policy counsel to the National Senior Citizens Law Center and supporter of the health law, said the ruling is “less significant” than the surprising decision by conservative Sixth Circuit Justice Jeffrey Sutton’s decision to uphold the individual mandate earlier this summer. Few were shocked by the 11th Circuit ruling but Sutton’s verdict caught many off guard and therefore might be more influential if the case makes it to the Supreme Court.

Equally favorable for the Obama administration, he said, is the fact that the 11th Circuit judges who ruled against the individual mandate still supported the constitutionality of the wider law.

“I think this really makes clear that any notion that the entire health reform law is going to be undone through litigation is out the window,” he said. “And that means efforts to tell states and providers not to bother complying with the law and not to bother implementing it — I think that that prospect has been very significantly knocked to the side.”

But while Lazarus draws hope from the fact that a series of conservative judges didn’t tear down the law in its entirety, Randy Barnett, a professor of legal theory at Georgetown University Law Center, points out that justices appointed by both Democratic and Republican presidents have now ruled that the individual mandate is unconstitutional.

Regardless, Barnett says it’s time for the Supreme Court to take up the case and settle the issue once and for all.

“Only then would the uncertainty inflicted upon the national economy by this unprecedented and unconstitutional law be lifted,” he said. “Both the country and the Constitution cannot afford any delay.”

Friday afternoon, the National Federation of Independent Business – a party to the case along with the 26 states contesting the law – expressed similar sentiment, urging the Supreme Court to revert back to Vinson’s decision and strike down the law in its entirety.

“Small-business owners across the country have been vindicated by the 11th Circuit’s ruling that the individual mandate in the healthcare law is unconstitutional,” wrote Karen Harned, executive director of the group, which says the law will be overly burdensome to small businesses. “The court reaffirmed what small businesses already knew — there are limits to Congress’ power. And the individual mandate, which compels every American to buy health insurance or pay a fine, is a bridge too far.”

The much-anticipated verdict Friday moves the health law one step closer to the Supreme Court, but it isn’t the first ruling on the law from an appeals court. Earlier this summer, a three-judge appeals court panel in Cincinnati ruled in favor of the government’s ability to require all Americans purchase insurance, and an appellate court in Richmond, Va., that heard similar arguments is expected to issue its verdict soon.

The Obama administration will have 90 days to appeal the decision to the Supreme Court or to request that the full 11th Circuit review the case.