Why do Americans spend so much on pharmaceuticals?

The United States spends almost $1,000 per person per year on pharmaceuticals. That’s around 40 percent more than the next highest spender, Canada, and more than twice as much as than countries like France and Germany spend. So why does the U.S. spend so much? Is it because Americans take more medicines or because they pay higher prices? Can Americans afford the drugs they need? And will the Affordable Care Act change anything? 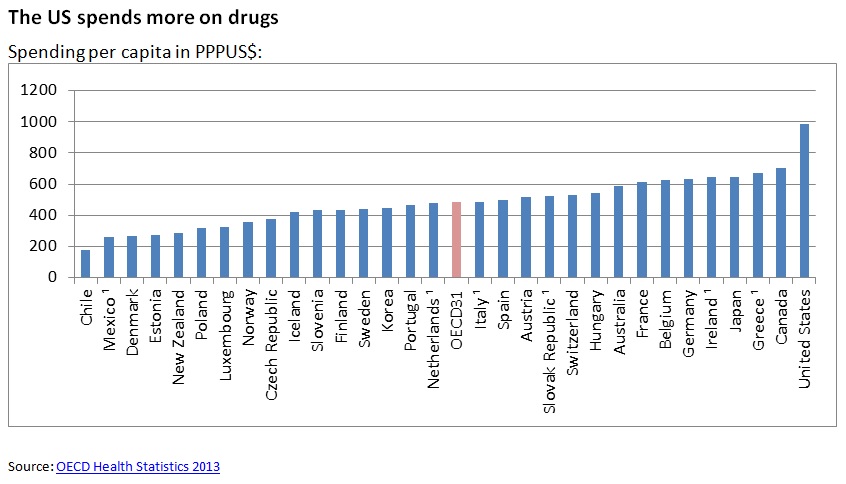 Overall, Americans use more medicines than people in other developed countries. They rank first for their use of antipsychotics as well as drugs for dementia, respiratory problems and rheumatoid arthritis. This is partly explained by medical needs: The burden of disease in the U.S. — as measured in “years of life lost” — is higher than in many OECD countries for the most common forms of heart disease, chronic obstructive pulmonary diseases, diabetes, and Alzheimer’s. Several factors may explain this, including high levels of obesity and high rates of diagnosis.

Americans also have faster access to new drugs than patients in many other countries. That’s in part because the U.S. has always been a very attractive market for pharmaceutical companies: It’s big, accounting for 34 percent of the world market; has low levels of price regulation; and offers few barriers to market entry once FDA approval has been secured. (By contrast, in some other countries there may be a time lag between clinical approval of a drug and the point when it is added to official lists of reimbursable drugs.)

The result is that companies often choose the U.S. to launch new products. And, because the US market is so big and profitable, investments in research and development have long been steered towards meeting its clinical needs.

Drug costs are high in the U.S.

But if Americans take more pharmaceuticals, they also pay more for them. Prices in the U.S. for brand-name patented drugs are 50 to 60 percent higher than in France and twice as high as in the United Kingdom or Australia. That’s because in many countries, government agencies essentially regulate the prices of medicines and set limits to the amount they will reimburse; they may only agree to pay for a drug if they feel that the price is justified by the therapeutic benefits. This centralized approach can also give them more bargaining power over drug makers.

By contrast, in the U.S. insurers typically accept the price set by the makers for each drug, especially when there is no competition in a therapeutic area, and then cover the cost with high copayments. Where there are competing drugs, insurers enjoy more bargaining power and may negotiate discounts with manufacturers in exchange for lower cost-sharing for patients. In off-patent markets, the competition is fierce and prices of generic drugs are low. Generic penetration is high in the U.S. and their use spreads quickly: within six months of a patent expiring on a drug, generics typically account for 80 percent of the market. Generics now account for 28 percent of pharmaceutical spending and 84 percent of drugs dispensed in the U.S., which is high by OECD standards. 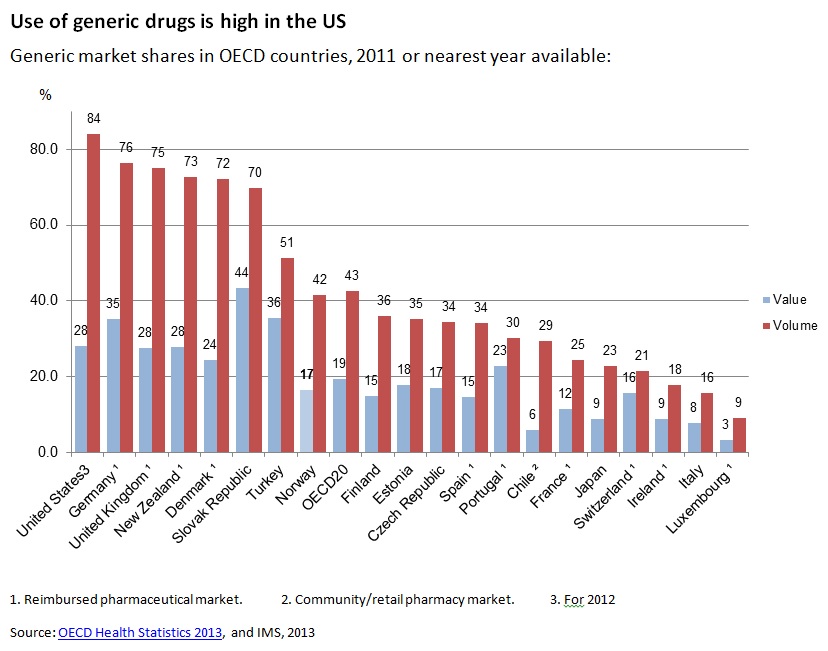 Many Americans can’t afford their medications

Can patients access the drugs they need? While the financial burden for households has declined over the past years, it is clear that many Americans are not taking their recommended medications because of the high costs. A recent survey showed that around one in five U.S. adults did not fill out their prescription or skipped doses because of the costs of medicines in 2013. The proportion was less than one in ten in Germany, Canada and Australia. The difference is that, unlike in the U.S., health coverage in most other OECD tends to be universal. Patients often have to share the costs of pharmaceutical treatments, but they get exemptions if they are poor, severely ill or have reached a certain level of out-of-pocket payments. 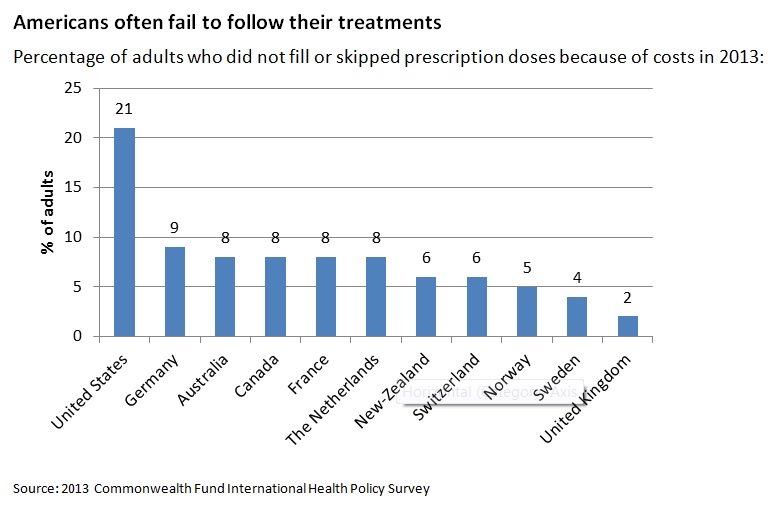 What will change with the Affordable Care Act?

The Affordable Care Act has already reduced copayments for Medicare patients and it will increase the number of people covered for prescription drugs. By making drugs more affordable, the reform will likely increase the volume of drugs used in the U.S. — prescription rates are likely to rise, as will patients’ compliance to treatments.

But will prices fall? The reform does not provide new leverage to lower prices and nor does it remove barriers to price negotiation for some Medicare plans. At best, insurers may use comparative effectiveness studies from the Patient-Centered Outcomes Research Institute to encourage more appropriate treatments. But without further change, the prices of new and highly specialized drugs will likely rise, especially at a time when pharmaceutical firms are facing sluggish revenue prospects.

Will this, in turn, mean that the U.S. spends more on drugs? It’s true that in the U.S., as in many wealthy OECD countries, pharmaceutical spending has been declining in real terms. For some countries, this trend is explained by cuts in government spending in the wake of the Great Recession. In the U.S., much of this decline is explained by the fact that patents on a number of top drugs have expired, meaning they can be replaced by cheaper generics. This effect is expected to last another two or three years; after that, future trends in spending are harder to predict. 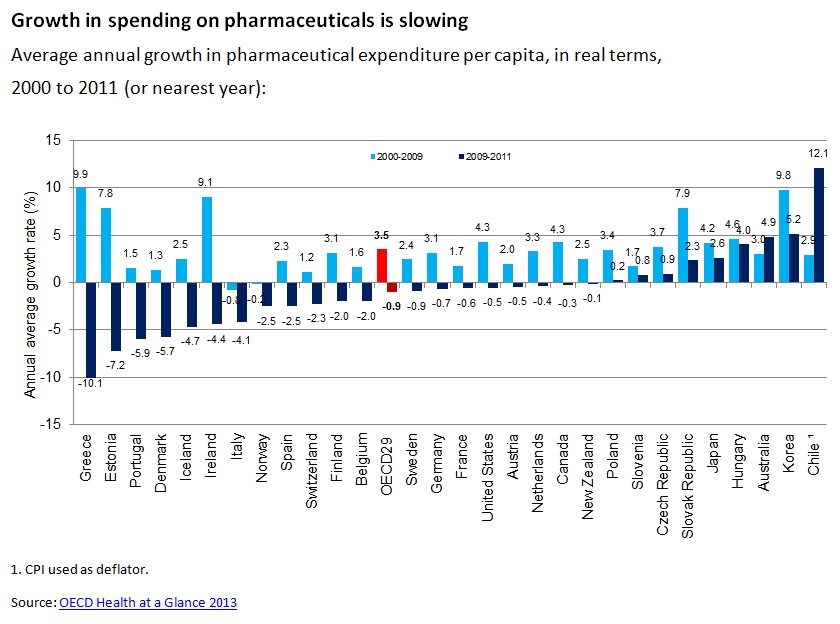