An architect with ALS designs a home controlled by blinks

CHELSEA, Mass. — Steve Saling is sitting in his bedroom at the Leonard Florence Center for Living just north of Boston. He aims his gaze at the tablet mounted to his wheelchair and, with a small movement of his facial muscles, raises the window shade to sunlit afternoon clouds.

Now, behind thin, oval eyeglasses, Saling again blinks purposefully, like a telekinetic superhero. The door opens, and he steers his well-equipped wheelchair through smoothly.

A landscape architect by trade, Saling was diagnosed 10 years ago with amyotrophic lateral sclerosis, or ALS, commonly called Lou Gehrig’s disease. It’s a neurological condition that affects nerve cells in the brain and spinal cord. Over time, people with ALS lose the ability to walk, speak, and move without assistance.

But the most unusual difference is the way this place works. And Saling is partly responsible for that.

Unwilling to accept a life utterly dependent on caretakers, Saling designed a series of systems that let patients with ALS control their environment in the assisted living center with the barest of movements: blinks and facial twitches. They can open and close doors, turn on and off lights, change TV channels, and control heat and air-conditioning, among other things.

Saling used his disability to his advantage.

The first cluster of accessible rooms, named for Saling, opened in 2010. Last month, the Florence Center opened a second set of rooms, called the Dapper McDonald ALS Residence. All told, there are now 30 bedrooms here equipped with systems that give patients with ALS, multiple sclerosis, or other disabling diseases some measure of independence.

Saling also established the ALS Residence Initiative, a fundraising and advocacy group that aims to build more such homes to serve the estimated 12,000 ALS patients across the country. The group’s motto: “Until medicine proves otherwise, technology IS the cure.”

The advocacy group is working with local ALS patients and caregivers to build automated assisted living homes in New Orleans (where the residence features a garden designed by Saling) and in Dahlonega, Ga. Fundraising and planning are underway as well in Dallas, Baltimore, and Windham, Maine.

Patients with ALS “want to live in residences like this,” said Barbara Newhouse, president and CEO of the ALS Association in Washington. “We steer people toward resources that would benefit them, and this is one model of residential care that we look to.” 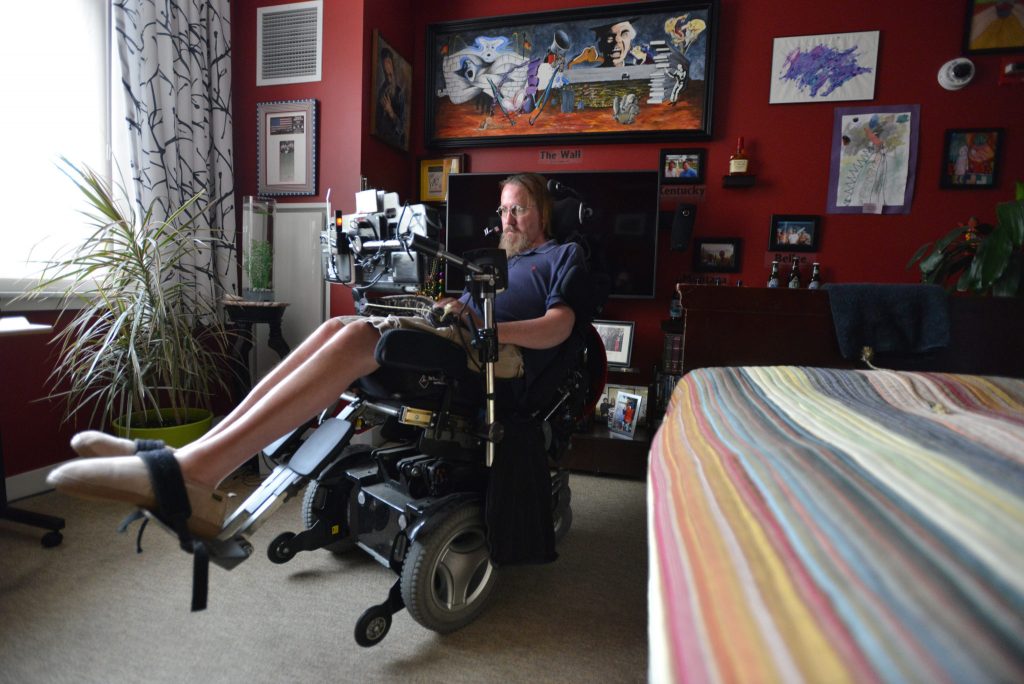 Steve Saling, a retired landscape architect, sits in his room. Here, he can control the window shade, television, and door with subtle movements of his face. Photo by Josh Reynolds for STAT

Calling the elevator with a blink

Saling, 47, rolls past the art decorating his room — original works by his 9-year-old son, Finn, set against a deep-red wall — and out to a hallway, pulling up toward the elevator.

He’d summoned the elevator before he left his room, and indicated where he wanted to go. The secret is a small, white box on the wall above the elevator call buttons. After Saling’s computer converts his blinks into radio frequency signals, the little box conveys them to a receiver in the basement. The signals are then sent as commands to the elevator’s computerized operating system.

Saling recalled that there was skepticism about the elevator during the design process.

“The biggest challenge was convincing the elevator sub-consultant that we could automate his elevator,” he says. “A few of the subs were reluctant to embrace change, but they all came around. It all came out beautifully.”

Saling moves on and points toward the central, open kitchen. There’s a fire safety feature built in — important in an apartment with 10 severely disabled people. In case of fire, the kitchen is automatically walled off from the rest of the suite. This contains the smoke or fumes, and gives residents time to evacuate if necessary.

Saling passes the kitchen and heads into the living room and dining area, decorated with framed abstract prints and a babbling television. Another man in a wheelchair chats with the staffer feeding him at the dining table.

“We create our own menus and eat whenever we please, just like people in a real household,” Saling said, using one of the ready-made statements he cues up with his computer. Once it affects the vocal cords and other speech-related muscles, ALS leaves little room for spontaneous banter, especially for a tour Saling has given several times. The male voice from his speech unit, less like a robot than a newscaster, makes even the most mundane statements sound like narration in a documentary.

Soon after his diagnosis, Saling had a chance meeting with Barry Berman, CEO of the Chelsea Jewish Foundation, which operates the Florence Center. He told Berman about his interest in creating a place where people with ALS could receive care, but remain as independent as possible even as they became more disabled.

It wasn’t a tough sell, said Berman, but he had some catching up to do.

“We had to call the ALS Association because we had no knowledge of the disease,” he said. Once he understood, he was on board. 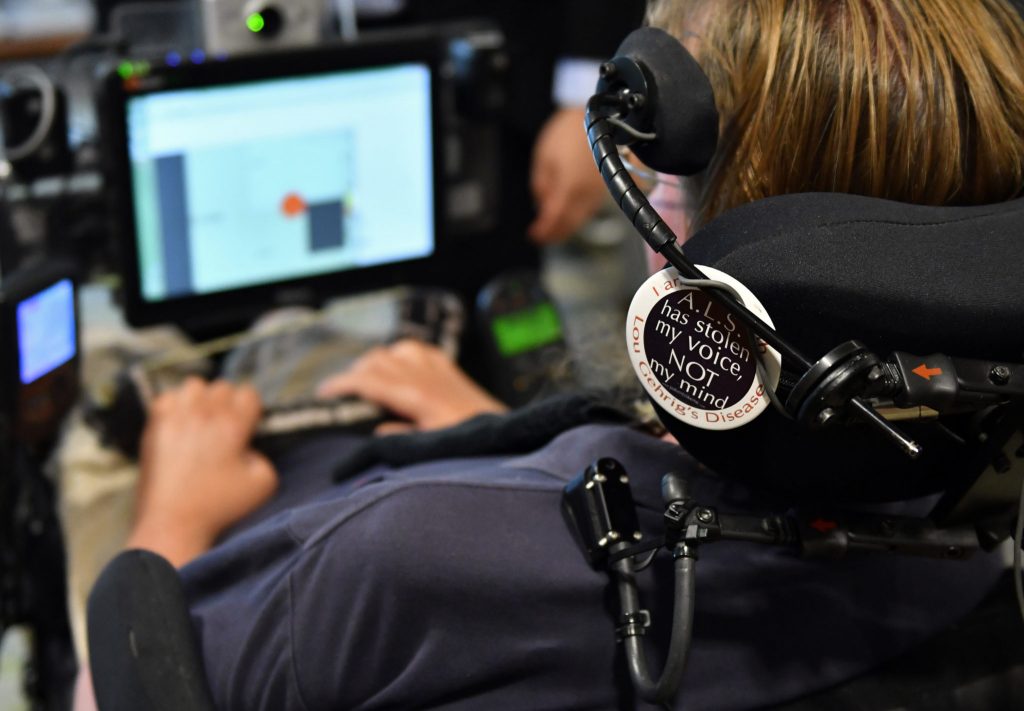 Saling with the monitor he uses to operate his automated home. Photo by Josh Reynolds for STAT

When architects from the Boston-based firm DiMella Shaffer began designing the apartments, Saling worked closely with them. He brought with him years of experience as a landscape architect.

“I would attend weekly meetings consulting with the architects,” he said. “Especially on accessibility issues because, ironically, I was an accessibility expert when I worked professionally.”

Berman recalled that Saling was working against time.

“Steve was still driving and walking,” said Berman. “But he was walking with a cane and his voice was getting weak. He was already living in our assisted living facility.”

But Saling used his disability to his advantage.

“The notable impact that ALS had on my ability to design is speed,” he said. “I am a lot slower. But I have the time to really think about what I am doing, so there is an upside. Because much of my profession had been computerized and I excelled in computer-assisted drafting, I was still able to convey my ideas with a lot of precision.”

The ALS residences cost the Florence Center nearly $500,000 a year to run.

The automation reduces some costs for the Florence Center, because fewer staff are needed. The residents still need help eating, bathing, and taking care of other day-to-day needs. “But having this technology means that during the day, you don’t have to call a nursing assistant when you want the window open,” said Mike Ferrick, the executive director of Florence Center.

Even so, an automated home for people with ALS is expensive. “We lose money on these units every month,” said Ferrick. He said the ALS residences cost the Florence Center nearly $500,000 a year to run.

Some of the cost is covered by the residents’ insurance, typically Medicaid, Medicare, or MassHealth, the state’s insurance program. The rest comes from donations, Ferrick said, or from the center’s overall budget. Profitable programs such as physical therapy bring in funds that the Florence Center uses to subsidize the assisted living residences.

Despite the cost, Berman believes the ALS residences are worthwhile.

“It’s a struggle,” he said. “But we knew we wanted to open a residence for people with ALS. Steve has dedicated his life to this, and I’m happy to be a part of it.”

This article is reproduced with permission from STAT. It was first published on July 6, 2016. Find the original story here.

Left: Steve Saling, an architect and engineer with ALS, helped design features of the Leonard Florence Center, Dapper McDonald ALS Residence, intended to preserve the independence of those with ALS, where he is a resident. Photo by Josh Reynolds for STAT

Leah Samuel is a staff reporter for STAT. A journalist for over 25 years, Leah’s work has appeared in newspapers and magazines across the country, including Harvard Magazine, Labor Notes, The Chicago Reporter, and PublicSource.org. Leah is also a film fan, history buff, science nerd, and trivia nut. When she's not working on a story, she frequently replaces her notebook and pen with yarn and a crochet hook.