Epidemiologists working on the world’s latest Ebola outbreak are racing to try to solve a mystery. Why have so many children — some still infants — been infected with the virus?

The disproportionate number of recent infections among children in the Democratic Republic of Congo — specifically in Beni, the outbreak’s current hot spot — has come as a surprise; typically young children don’t make up a big proportion of cases during an Ebola outbreak.

But in the first two weeks of October, nearly 60 percent of the newly reported cases in and around Beni were children under the age of 16, Dr. Peter Salama, of the World Health Organization, told STAT.

“It is unusual for this outbreak and it is unusual in previous outbreaks … to see this proportion of kids,” said Salama, who called it “a very high number.”

The latest situation report from the global health agency noted that of 43 cases reported in early October — there have been more since the report was written — 20 were children. Nine of the children were under the age of 5.

Overall there have been 223 confirmed and probable cases in this outbreak, which is believed to have begun in July. Of those infections, 144 have been fatal.

Salama, who is WHO’s deputy director-general of emergency preparedness and response, said epidemiologists in Beni are trying to figure out what’s behind the puzzling phenomenon involving children.

At this point, they have a theory — though Salama stressed that it is only that at this stage.

It is currently peak malaria season in Beni. Children in particular can become severely ill when they contract malaria. And it appears that a lot of the children who contracted Ebola in Beni had recently seen medical practitioners or traditional healers.

If a clinic or traditional healer is treating an undiagnosed Ebola patient, other people also present could become infected. That is believed to have happened recently to a plumber who worked on the U.N. peacekeepers’ compound at Beni.

It’s also possible that children who were brought for care for malaria might have received a therapy — something injectable — that could explain the exposures, Salama said.

“It’s a working theory at the moment and we’re trying to get to the bottom of it over the next couple of days,” he said of the malaria hypothesis.

READ NEXT: Related: Ebola experts from CDC were pulled from outbreak zone amid security concern

Some of the children have died at home, which puts the family members who looked after them at grave risk. But others have been brought to Ebola treatment centers, Salama said.

The emergency medical response group Alima is operating the Ebola treatment center at Beni and, for the first time in an Ebola outbreak, has started to use an innovative new approach to build community trust and encourage people to bring sick loved ones in for care, Salama said.

That approach is built around a cube — a contained, clear enclosure in which a patient receives care. Medical personnel remain outside the cube, but can reach inside through gloved ports to deliver care. (They don’t need the multiple layers of protective equipment that make them look more alien than human.) 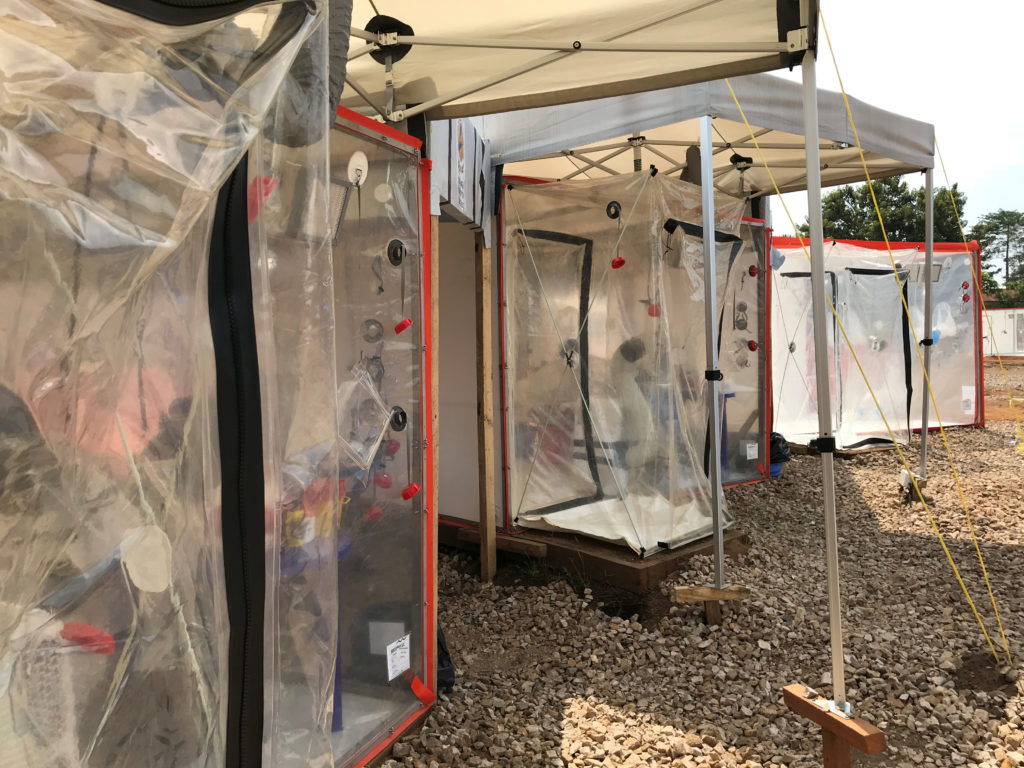 “From the perspective of family engagement and family understanding of what’s happening, I think they’ve been an extremely important advance,” Salama said. “I don’t have scientific evidence for that, but certainly anecdotally I think that’s helping a lot with family members feeling more confident that they know what’s happening and they can stay engaged with their loved one.”

There is still community resistance, however. And that, combined with security problems, have resulted in a worrying turn of events: It’s becoming more and more difficult for the responders to follow the Ebola chain of transmission. Knowing where the virus is spreading is critical to controlling an outbreak.

Over the past three or four weeks, a growing proportion of cases have been people who were not identified as contacts of previous cases. And increasingly, even retrospective attempts to figure out how these people became infected are failing to chart the links. “That’s extremely concerning,” Salama said.

READ NEXT: WHO raises concerns over Ebola outbreak, but declines to declare a global health emergency

Response coordinators are exploring the possibility of using rapid genome sequencing of viruses to try to bolster their flagging surveillance efforts, he said. Comparing the genetic blueprint of a virus to others in the outbreak can show if a new infection is part of an established chain of transmission, or is perhaps a sign other transmission chains have been spreading disease undetected.

“Given that we’re struggling now because of security to be able to keep track of the chain or chains of transmission, having that added reassurance from the genetics would be another data point,” Salama said.

The WHO is discussing the issue with the ministry of health, looking for agreement. Salama said the country’s national laboratory, the National Institute of Biomedical Research, believes it has the capacity to do the work.

If that doesn’t work, there are other options, Salama said. “There’s a lot of groups that want to support us on this, and we think it’s another good innovation.”

This article is reproduced with permission from STAT. It was first published on Oct. 19, 2018. Find the original story here.

Left: A Congolese health worker administers Ebola vaccine to a boy who had contact with an Ebola sufferer in the village of Mangina in North Kivu province of the Democratic Republic of Congo, August 18, 2018. Photo By Olivia Acland/Reuters