An Illustrated History of AIDS 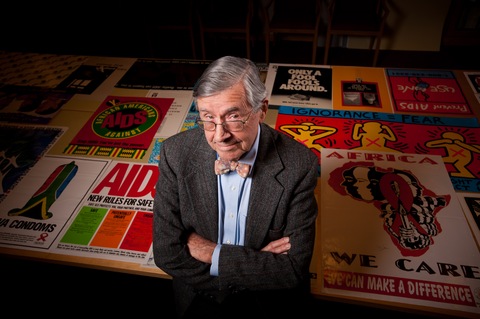 Dr. Edward Atwater, 85, poses with some of the more than 6,000 posters in his collection. Photo courtesy of the University of Rochester.

The colorful posters have graced walls and subways in London, New York, and Paris. But they weren’t ads for the latest haute couture — they were all once part of public health campaigns aimed at raising awareness of AIDS.

Dr. Edward Atwater, 85, began collecting the posters more than two decades ago. The first one to catch his eye was in 1990, in Boston. The bright orange poster showed two hands opening a condom wrapper. “I was rather surprised by that,” he said. “When I graduated from medical school in 1955, it was illegal to teach anything about contraception,” and “that was one of the things that tweaked my interest.”

In the beginning, the retired physician collected them out of his interest in medical history. But, he said, “I realized that they were far more interesting as social history.” The posters illustrate how different cultures approached what was then a “touchy subject.” They also show the evolution of our understanding of the disease — from a time when people thought they could catch it in a public pool to encouraging contraception.

Photo courtesy of the University of Rochester.

The collection grew to more than 6,000 posters from 125 countries — the largest collection of its kind in the world.

“We tried to use them for the purpose in which they were intended,” Dr. Atwater said. They’ve been displayed at numberous libraries and museums, and now, Dr. Atwater donated them to the University of Rochester in western New York, where he practiced medicine.

And, for the record, he’s never torn a poster down from a wall. “That sort of defeats the purpose of the posters if you’re going to take them down.”

To learn more about the collection (and how Dr. Atwater acquired them), view our conversation above. And to view the more than 1400 images (and counting) on display the University of Rochester’s website, click here.