In 1942, 18-year-old Iris Lopez, a Mexican-American woman, started working at the Calship Yards in Los Angeles. Working on the home front building Victory Ships not only added to the war effort, but allowed Iris to support her family.

Iris’ participation in the World War II effort made her part of a celebrated time in U.S. history, when economic opportunities opened up for women and youth of color.

However, before joining the shipyards, Iris was entangled in another lesser-known history. At the age of 16, Iris was committed to a California institution and sterilized.

In the first half of the 20th century, approximately 60,000 people were sterilized under U.S. eugenics programs.

California led the nation in this effort at social engineering. Between the early 1920s and the 1950s, Iris and approximately 20,000 other people – one-third of the national total – were sterilized in California state institutions for the mentally ill and disabled.

To better understand the nation’s most aggressive eugenic sterilization program, our research team tracked sterilization requests of over 20,000 people. We wanted to know about the role patients’ race played in sterilization decisions. What made young women like Iris a target? How and why was she cast as “unfit”?

Racial biases affected Iris’ life and the lives of thousands of others. Their experiences serve as an important historical backdrop to ongoing issues in the U.S. today.

Eugenics was seen as a “science” in the early 20th century, and its ideas remained popular into the midcentury. Advocating for the “science of better breeding,” eugenicists endorsed sterilizing people considered unfit to reproduce.

Under California’s eugenic law, first passed in 1909, anyone committed to a state institution could be sterilized. Many of those committed were sent by a court order. Others were committed by family members who wouldn’t or couldn’t care for them. Once a patient was admitted, medical superintendents held the legal power to recommend and authorize the operation.

Eugenics policies were shaped by entrenched hierarchies of race, class, gender and ability. Working-class youth, especially youth of color, were targeted for commitment and sterilization during the peak years.

Eugenic thinking was also used to support racist policies like anti-miscegenation laws and the Immigration Act of 1924. Anti-Mexican sentiment in particular was spurred by theories that Mexican immigrants and Mexican-Americans were at a “lower racial level.” Contemporary politicians and state officials often described Mexicans as inherently less intelligent, immoral, “hyperfertile” and criminally inclined.

These stereotypes appeared in reports written by state authorities. Mexicans and their descendants were described as “immigrants of an undesirable type.” If their existence in the U.S. was undesirable, then so was their reproduction.

In a study published March 22, we looked at the California program’s disproportionately high impact on the Latino population, primarily women and men from Mexico. 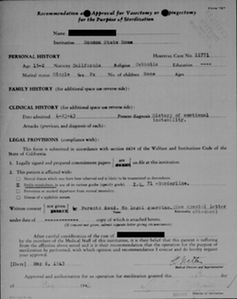 A sample sterilization form for a 15-year-old woman in California. Photo by Sterilization and Social Justice Lab, University of Michigan

Previous research examined racial bias in California’s sterilization program. But the extent of anti-Latino bias hadn’t been formally quantified. Latinas like Iris were certainly targeted for sterilization, but to what extent?

We used sterilization forms found by historian Alexandra Minna Stern to build a data set on over 20,000 people recommended for sterilization in California between 1919 and 1953. The racial categories used to classify Californians of Mexican origin were in flux during this time period, so we used Spanish surname criteria as a proxy.
In 1950, 88 percent of Californians with a Spanish surname were of
Mexican descent. 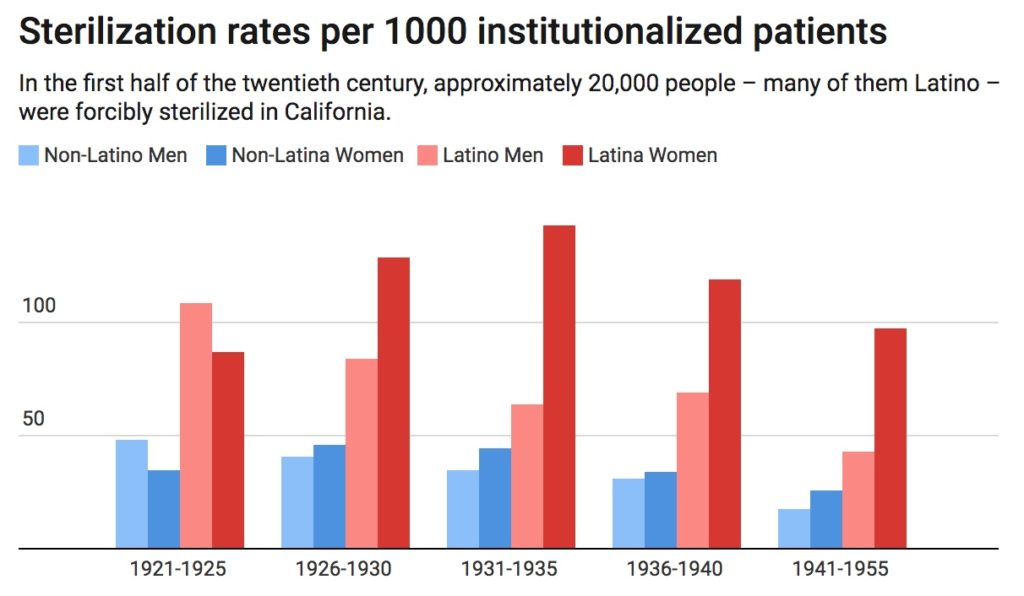 The legacy of these infringements on reproductive rights is still visible today.

Recent incidents in Tennessee, California and Oklahoma echo this past. In each case, people in contact with the criminal justice system – often people of color – were sterilized under coercive pressure from the state.

Contemporary justifications for this practice rely on core tenets of eugenics. Proponents argued that preventing the reproduction of some will help solve larger social issues like poverty. The doctor who sterilized incarcerated women in California without proper consent stated that doing so would save the state money in future welfare costs for “unwanted children.”

The eugenics era also echoes in the broader cultural and political landscape of the U.S. today. Latina women’s reproduction is repeatedly portrayed as a threat to the nation. Latina immigrants in particular are seen as hyperfertile. Their children are sometimes derogatorily referred to as “anchor babies” and described as a burden on the nation.

This history – and other histories of sterilization abuse of black, Native, Mexican immigrant and Puerto Rican women – inform the modern reproductive justice movement.

This movement, as defined by the advocacy group SisterSong Women of Color Reproductive Justice Collective is committed to “the human right to maintain personal bodily autonomy, have children, not have children and parent the children we have in safe and sustainable communities.”

As the fight for contemporary reproductive justice continues, it’s important to acknowledge the wrongs of the past. The nonprofit California Latinas for Reproductive Justice has co-sponsored a forthcoming bill that offers financial redress to living survivors of California’s eugenic sterilization program. “As reproductive justice advocates, we recognize the insidious impact state-sponsored policies have on the dignity and rights of poor women of color who are often stripped of their ability to form the families they want,” CLRJ Executive Director Laura Jiménez said in a statement.

This bill was introduced on Feb. 15 by Sen. Nancy Skinner, along with Assemblymember Monique Limón and Sen. Jim Beall.

If this bill passes, California would follow in the footsteps of North Carolina and Virginia, which began sterilization redress programs in 2013 and 2015.

In the words of Jimenez, “This bill is a step in the right direction in remedying the violence inflicted on these survivors.” In our view, financial compensation will never make up for the violation of survivors’ fundamental human rights. But it’s an opportunity to reaffirm the dignity and self-determination of all people.

Nicole Novak is a postdoctoral research scholar at the Prevention Research Center in the University of Iowa College of Public Health. Natalie Lira is an assistant professor of Latina/Latino Studies at University of Illinois at Urbana-Champaign. This article was originally published on The Conversation. Read the original article.

Left: Postcard of the Napa State Hospital in Napa, Calif., circa 1905. Over 1,900 Californians were recommended for sterilization while patients here. Postcard via The collection of Alex Wellerstein