As Brazil grapples with Zika, vaccine rumors stir among mothers

RECIFE, Brazil – As scientists have tried to solve the medical mystery behind the surge of babies being born with devastating birth defects in Brazil, they’ve pieced together evidence that the mosquito-borne Zika virus may be to blame. But in northeast Brazil, many residents have fashioned a rival theory: That the defects are caused by vaccines dispensed by the government.

Here in Pernambuco, the state hardest hit by the recent uptick in babies born with microcephaly, it’s easy to find people eager to discuss the claim. Cab drivers, doctors, relatives of the afflicted children, government workers, researchers — all will expound on the rumor, some convinced that it is true, others appalled by its pervasiveness and persistence.

Microcephaly is a condition in which the brain stops growing mid-pregnancy, consigning a child to a lifetime of developmental delays. Scientists have discovered evidence indicating a link between microcephaly and Zika, a relative of dengue fever that has spread with alarming speed across the Americas. The virus or its antibodies have now been found in the brain tissue, the amniotic fluid or the spinal fluid of at least 41 babies with the disorder.

But not everyone accepts this research.

“I think it’s lies,” said Luciana. “It’s not the mosquitos. The mosquitos have always been here and we’ve never had this problem.”

The twin sisters said there are reasons many doubt the Zika-microcephaly connection: Some pregnant women, for example, come down with Zika but their babies are born just fine. Other mothers never have any symptoms, yet their babies have the defect anyway. Moreover, they said, babies have always been born with microcephaly in Brazil, long before Zika arrived in the country. 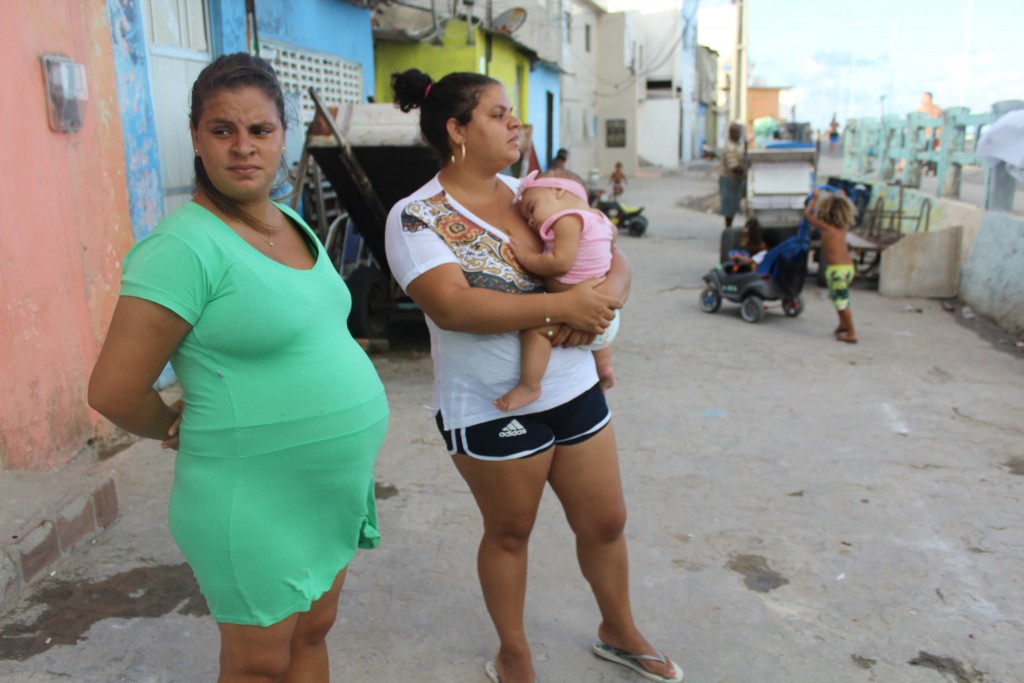 These are among the many theories that researchers have looked into. They know that mosquitos have indeed been in Brazil for centuries, but Zika itself is new to the country; epidemiologists believe it arrived in late 2014. Early studies of the virus indicate that as many as 80 percent of those infected are asymptomatic, so women with no symptoms may still be infected with the virus and pass it to their fetus. Still to be determined is whether all infected women pass the virus to the fetus, or if all infected fetuses are damaged by the virus.

The Silva dos Santos sisters are correct that babies have always been born with microcephaly: Other viruses can cause the condition, as can exposure to certain drugs and alcohol. But when obstetricians across northeast Brazil began delivering a larger than normal number of microcephaly babies last August, epidemiologists ruled out those common causes as an explanation. And thus far, no researcher has produced evidence linking microcephaly to expired vaccines.

But Luciana said it can be hard to trust anything government specialists say.

“They’re pushing this story about the mosquitos because they’re worried about indemnity — they don’t want to have to pay everyone for the damage their vaccines are causing, it would be too expensive to tell the truth. So they say it’s mosquitos causing microcephaly.”

“Shhh! You’re going to get us arrested by the federal police,” joked Luana.

Distrust of the Brazilian government plays a large role in conversations with those who favor the vaccine theory. Brazilians have long been distrustful of their government, a sentiment that has grown stronger in recent years, aided by an economic plunge and a series of corruption scandals. The scandals have led to the investigations of many high-profile figures in Brazil, including the speaker of Brazil’s lower house of Congress and President Dilma Rousseff, whose approval ratings have dropped to below 10 percent.

The rumor that vaccines are to blame for the microcephaly epidemic has spread rapidly through social networks and text messages. The theory has a variety of iterations, but it commonly blames an expired batch of measles, mumps and rubella vaccine.

On Dec. 30, the federal government’s central information services took direct aim at that argument, writing that “it is totally false that an expired batch of rubella vaccines, rather than the Zika virus, has caused the microcephaly outbreak.” The country’s health minister, Marcelo Castro, said he has “100 percent certainty” that a link exists between Zika and microcephaly.

In recent days, yet another rival theory has arisen: That a specific pesticide is causing birth defects. Last week, a group of Argentine doctors issued a report arguing that the larvicide Pyriproxyfen, which is widely dispensed in water tanks in Brazilian homes to fight mosquitos, could be causing microcephaly. The report offered neither lab tests or epidemiological evidence to support its claim, but said the larvicide could be the problem anyway. The claim has grasped the public imagination, and at least one Brazilian state has desisted from using the pesticide. The federal Ministry of Health immediately dismissed the claim as having “no scientific basis.”

Ederlanha, an 18-year-old mother of a child recently diagnosed with microcephaly, is inclined to believe vaccines may be the problem. She says she never had symptoms of Zika, but she did receive a shot from her public health clinic every month of her pregnancy. As she waited for an appointment at the public hospital in Recife, she tried to soother her fussing baby, but said she couldn’t recall exactly what the shots were for.

“Maybe I got one that was out of date,” said Ederlanha, who declined to provide her last name. “I don’t believe it’s a mosquito that causes [microcephaly]. That’s an invention of the government … Everybody I know is saying that it’s an out-of-date vaccine.”

The rumor exasperates Patricia Ismael de Carvalho, general director of information and strategic actions in epidemiological surveillance for the Pernambuco State Secretariat of Health. She insisted that vaccines present no danger to pregnant women, and that there is nothing to support the theory.

“It’s impossible. Vaccination given to pregnant women are all inactivated viruses. There is nothing active in the vaccine, nothing to cause harm,” she said.

In contrast, the nascent research linking microcephaly with Zika has been persuasive to most scientists and policy makers — enough to justify major investments on mosquito eradication campaigns, education blitzes and more research. Last week, for example, President Barack Obama requested more than $1.8 billion in emergency funding to fight the Zika outbreak.

The roots of the microcephaly surge will be tested as part of a case-controlled study underway at IMIP, a maternal and infant care hospital in Recife, said Dr. Adriana Scavuzzi, the hospital’s women’s health coordinator. Researchers will interview 200 women, half mothers of babies with confirmed microcephaly, and half mothers of apparently healthy children, about their lives and health history — including their vaccination history.

Scavuzzi said she is “almost convinced” of the microcephaly-Zika connection, and that certainty will only come when more data is available. At this point, she said, scientists can only say the microcephaly outbreak is “highly likely” to have been caused by Zika.

One mother of a baby with microcephaly, 28-year-old Renata Nove, said she hardly heard of Zika, despite having had several appointments with doctors and other health workers since her son was born four months earlier with a tell-tale sign of microcephaly: a smaller-than-average head.

While she waited for an appointment at the public hospital in Recife, she chatted with journalists there to report on the disease. She recalled being sick in her fifth month of pregnancy. “I was itchy, I had swelling in the arms and legs, I started having a fever and a headache. It lasted a few days. It was food poisoning from a bad can of meat,” she said confidently.

Asked whether she knew those were the precise symptoms of Zika, Nove looked surprised.

“No, I didn’t. I never really heard about Zika until today, talking to reporters here at the clinic,” she said. After thinking about it more, she said she’d heard the word Zika on the news in recent days, but had never been told about it by a doctor, and had no information about it.

Such an admission was stunning to Ismael de Carvalho from the Secretariat of Health. She listed all the ways her department has put the word out about Zika: leaflets; TV and radio advertisements; the mobilization of businesses, churches and nongovernmental organizations; weekly press conferences and near daily coverage by local media.

“It’s very difficult to understand how someone wouldn’t hear about it, because everybody’s talking about this right now,” she said.

The dos Santos sisters have heard plenty about the mosquito theory, but they aren’t ready to believe it. Luana, the pregnant one, said her husband bought her a bottle of repellant and that she uses it regularly.

Luciana laughed. “Don’t believe her. She doesn’t really use repellent,” she said.

“Don’t tell them that!” Luana said.

“This story is very strange, this story about Zika and microcephaly,” said Luana. “If it is the mosquitos causing it, if all this is real, then I am afraid.”

Editor’s note: This report is part of a special series with Katie Worth, who is embedded in Brazil, and our partners at PBS Frontline/WGBH. This story was originally published February 16, 2016.

Left: Patricia Araujo (L), 23, who is seven-months pregnant, stands next to children as they pose in front of their stilt house, a lake dwelling also known as palafitte or 'Palafito', in Recife, Brazil, February 8, 2016. The Zika virus may be particularly adept at entrenching itself in parts of the body that are shielded from the immune system, making it harder to fight off and possibly lengthening the timeframe in which it can be transmitted, top U.S. experts said last Friday. Photo by Nacho Doce/REUTERS