As Epipen prices skyrocket, consumers and EMTs resort to syringes for severe allergies

Millions of people with severe allergies carry EpiPens to reverse life-threatening allergic reactions. But as the prices of these auto-injectors have soared, more than quintupling since 2004, many emergency medical responders — and some regular families — are turning to manual syringes as a cheaper alternative.

That’s raising concern among some doctors and patient advocates, who warn that it’s more complicated to get the correct dose and administer it safely with a syringe.

Over 3.6 million prescriptions for EpiPen kits were written last year

“Anyone using this approach would require extensive medical training to do it effectively and safely, without contamination or accidental intravenous injection,” said Dr. James Baker, Jr., the CEO and chief medical officer of Food Allergy Research & Education. The organization’s corporate sponsors include Mylan, which manufactures the EpiPen, and Sanofi, which used to sell a competitor.

Amie Vialet De Montbel felt that she didn’t have a choice but to try the syringe.

Her 12-year-old son is so allergic to milk that he wears a mask when he goes out in public. Last month, when she filled his prescription for two 2-packs of EpiPens — one to take to camp, and one for home —the cash register rang up a charge of $1,212.

“I was in absolute shock,” said Vialet De Montbel, who lives in Troy, Va. “I don’t even pay that much for my mortgage.” She has health insurance with a $4,000 deductible, so she would have had to pay the whole sum out of pocket. She didn’t buy the EpiPens.

At the doctor’s office the next day, a nurse told Vialet De Montbel something she had never heard before: For about $20, she could buy a couple of glass ampules of epinephrine and regular syringes from a local pharmacy, and get the syringes filled with the epinephrine at a doctor’s office. They would expire in about three months, whereas EpiPens last about a year, but they could save her more than $1,000. She plans to get the syringes soon.

Meanwhile her older son, age 15, is “carrying expired EpiPens because I can’t afford to get him [new ones] right now,” she said.

EpiPens — spring-loaded syringes filled with epinephrine — are widely carried by people with life-threatening allergies. Over 3.6 million prescriptions for EpiPen kits were written last year, and another half-million for other similar products, according to data provided by IMS Health.

Some states require schools to stock EpiPens. Emergency medical technicians who aren’t certified to give regular injections often carry them as well.

Emergency medical providers have been talking about the rising cost of EpiPens for the past few years, said Dr. Peter Taillac, chair of the medical directors council of the National Association of State EMS Officials.

“They cost too damn much,” Taillac said.

Mylan has raised the list price of EpiPens over 450 percent since 2004, after adjusting for inflation, according to data provided by Elsevier’s Gold Standard Drug Database. A pack of two EpiPens cost about $100 in today’s dollars in 2004. The list price now tops $600. Some emergency medical services buying directly from medical supply companies pay even more — upwards of $900 for a pack of two. 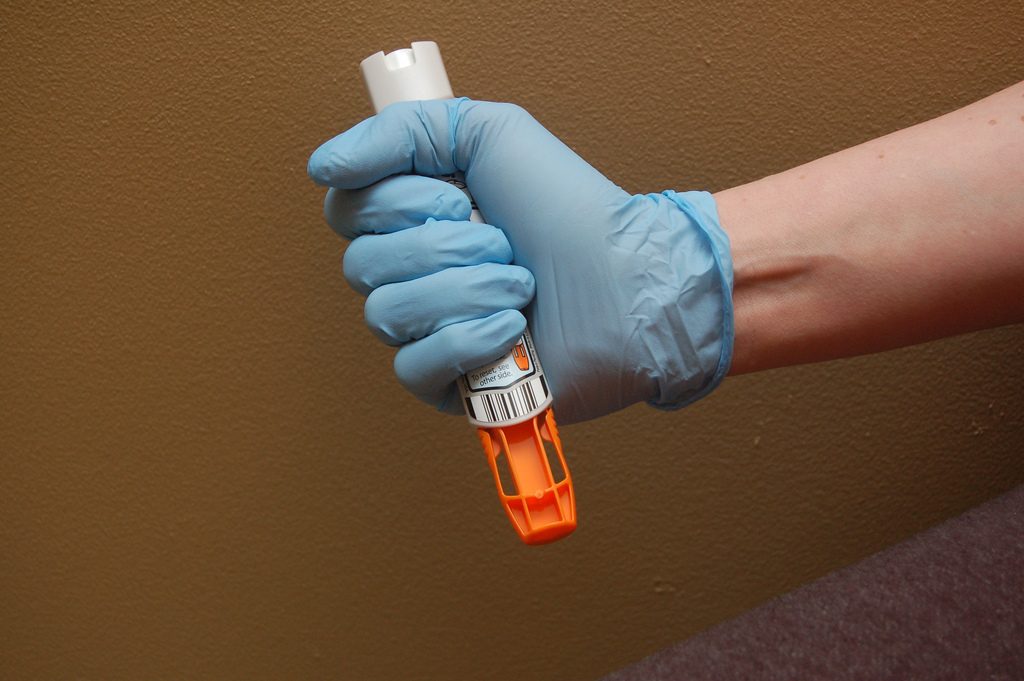 There are some competitors to EpiPen, but they haven’t caught on. Photo by Greg Friese/via Flickr

The company said the price increases over time “reflect the multiple, important product features and the value the product provides,” but declined to provide specifics about those features.

There are some competitors to EpiPen, but they haven’t caught on. The primary competitor, Auvi-Q, sold by Sanofi, was taken off the market in October 2015 because some of the devices weren’t dispensing the proper amount of medication.

A similar device, the Adrenaclick, was prescribed just a few hundred times last year, and a generic version was prescribed about 183,000 times, according to data from IMS Health. Since that device isn’t considered by the Food and Drug Administration as therapeutically equivalent to the EpiPen, it can’t be substituted when filling a prescription.

Teva Pharmaceutical Industries applied to market a generic EpiPen, but the application was rejected by the FDA earlier this year.

“The price of the auto-injector has become a real issue, particularly for the small rural agencies,” Taillac said.

The high cost has driven officials in at least 10 states — including Colorado, Maryland, and South Carolina — to push for training more EMTs to give epinephrine injections using regular syringes.

The price of the auto-injector has become a real issue, particularly for the small rural agencies

One of those agencies is the Broadlands-Longview Fire Protection District in Central Illinois, which uses all volunteer firefighters. Jim Jones, a district official, said his district has two fire stations, seven vehicles, and eight EpiPens. Those EpiPens alone cost the district about $2,400 a year, or 3 percent of its total operating budget.

Switching to regular syringes, Jones said, would save at least $2,200, which could pay for emergency medical technician training for five firefighters.

“That’s huge,” Jones said. “So I can spend the money educating our firefighters as opposed to buying EpiPens.”

Jones asked Illinois state Senator Chapin Rose to sponsor a bill to expressly allow first responders to administer epinephrine from a vial rather than an EpiPen. Rose estimated it could save hundreds of thousands of dollars for his district, and millions for the state. “It seems like we could do a heck of a lot of good with this change,” said Rose, a Republican.

The bill passed the House and Senate and is awaiting the governor’s signature.

Meanwhile, first responders in Seattle have developed a kit to use in place of EpiPens to save money. King County EMS began using the kits, which contain instructions, an epinephrine vial, and a syringe, in 2013. By now, they’ve replaced about 950 of their 1000 EpiPens with the kits, according to Jim Duren, professional standards manager for King County EMS.

Read More: Children with allergies, asthma may be at risk of heart problems, too

They also sell the kits sans epinephrine, at $15 each, to other public health agencies. Kits from King County have made their way into Alaska, Montana, Oregon, Utah, and Wyoming, Duren said.

Duren said that in the first year, his county saved more than $150,000. In New York, a pilot program with similar kits is estimated to save more than $1 million, if implemented statewide, said Dr. Jeremy Cushman, one of the program’s leaders. In September, the New York team will seek approval to expand.

The Asthma and Allergy Foundation of America finds the trend troubling. It recommends that everyone — parents, patients, and emergency responders — use epinephrine auto-injectors, not regular syringes.

“It’s fast, you don’t need to think, [and] it provides a measured dose,” said Dr. Cary Sennett, president and CEO of the foundation. The foundation has business relationships with many pharmaceutical firms, including Mylan and Sanofi.

But Dr. Richard Lockey, a professor at the University of South Florida who has been an allergy doctor since the 1970s, said some patients have always preferred syringes over the branded EpiPens and predicted that rising prices will likely prompt more to make that choice. He estimates that 1 out of every 6 of his patients chooses the regular syringes.

As long as patients are educated about how to use the syringes, he said they’re “99 percent as good” as the EpiPens. “Is that ideal? Well, no, not necessarily,” he said. “It’s better to have an auto-injector, yes.”

But Lockey said syringes make sense for patients who can’t afford the EpiPen. “Everyone wants to drive around in a Cadillac,” he said, “but not everybody does.”

This article is reproduced with permission from STAT. It was first published on July 6, 2016. Find the original story here.

Left: The prices of Epipen auto-injectors have more than quintupled since 2004. Photo by M/via Flickr