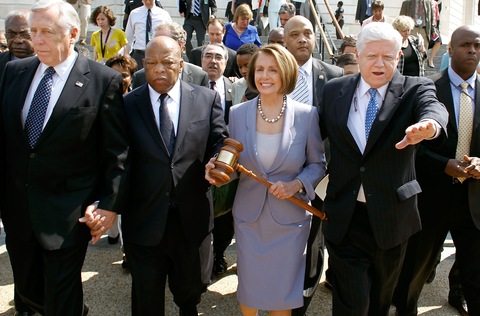 The House has now passed the reconciliation bill with amendments to the Senate health reform legislation, by a margin of 220-211. This bill will need to go back to the Senate for approval, which could happen as soon as Tuesday.

The House has passed the Senate health reform bill by a vote of 219-212, and the bill can now move to President Obama’s desk for a signature. Voting will begin shortly on the reconciliation bill.

Voting has begun in the House on the health care bill passed by the Senate last December. House Minority leader John Boehner gave an impassioned closing argument against the reform bill Sunday night, followed by Speaker of the House Nancy Pelosi’s final floor speech for the bill.

Boehner implored lawmakers to vote against a measure that he suggested many of them hadn’t read.

He said that lawmakers who voted for the bill would be “denying the will of the American people,” and suggested that the vote would spell the end of the Democratic Party’s majority in the next election.

“This is the people’s house. And the moment a majority forgets that, it starts writing itself a ticket to minority status,” Boehner said.

Pelosi followed with her own closing argument, invoking the historical significance of the moment.

“It is with great humility and great pride that we will make history for our country and progress for the American people,” she said. “Just think, we will be joining those who established social security, Medicare, and tonight, health care for all Americans.”

She quoted from a letter the late Sen. Ted Kennedy of Massachusetts wrote before his death: “Sen. Kennedy wrote that access to health care was the great unfinished business of our society,” she said. “That is, until today.”

After a day of procedural debate on the House floor and a last-minute deal on abortion behind-the-scenes, the passage of health reform legislation looked increasingly certain Sunday night. On the floor, the debate on the final bill has now been going for an hour, with Democrats and Republicans summing up the arguments they’ve been having for more than a year.

House Majority Leader Steny Hoyer opened the debate by comparing today to the day of Rev. Martin Luther King Jr.’s civil rights march across the Edmund Pettus bridge in Selma, Ala.
“Today, March 21, 2010, we will cross another bridge,” Hoyer said. “It is not a physical bridge but it is a bridge that too many Americans find they cannot cross.”

Democrats stayed on the theme of the historic nature of the vote: “We have a moral obligation, today, tonight, to make health care a right and not a privilege [….] we cannot wait, we cannot be patient, the American people need health care and they need it now,” said Georgia Democrat Rep. John Lewis. “On this day and this moment in this chamber, answer the call of history.”

“The American people have spoken. They do not want the tentacles of the federal government reaching into their lives and making their health care decisions […] I urge my colleagues to listen to the American people and kill the bill,” said Rep. Dave Camp, R-Mich.

Meanwhile, the vote-counting continued online, with the Washington Post, the New York Times and others all putting the Democrats over the 216 votes they need to pass the bill.

The Hotline has more on the back story behind Rep. Bart Stupak’s deal on a presidential executive order on abortion language.

The health care reform bill passed its first vote hurdle in the House at about 6:30 p.m., when 224 Democrats approved the “procedural rule” that would will allow the final debate on the legislation to begin. Another 206 lawmakers voted “no” on the rule.

House Majority Leader Steny Hoyer, D-Md., acknowledged the step with a tweet: “Turn on #CSPAN – I will deliver the opening statement of the final debate on #HCR in a few minutes after this series of votes.”

Twenty-eight Democrats joined 178 Republicans to vote against the rule.

The vote sets the stage for two hours of debate on both the Senate bill and the reconciliation bill, and then the final votes on both bills in quick succession.

Also, President Obama will make a statement in the East Room following the final vote, according to the White House press office.

The Washington Post has updated its FAQ on the timing of the final vote, which could now push past 9 p.m. ET. The Post also points out that Hoyer, Pelosi and House Minority Leader John Boehner, R- Ohio, can speak for as long as they want during the debate.

The New York Times is also updating its graphic on the votes still in play. According to their calculations, there are still four votes unaccounted for.

Rep. Bart Stupak, D-Mich., the leader of the group of anti-abortion Democrats in the House, announced shortly after 4 p.m. that the group had reached a deal with the administration that would allow them to vote for the health care reform bill.

The deal hinges on an executive order that President Obama will sign after the bill passes, reaffirming that the legislation will not provide any federal funding for abortions.

“I’m pleased to announce that we have an agreement […] to protect the sanctity of life in health care reform. There will be no public funding for abortion in this legislation,” Stupak said in a press conference.

Politico has the full text of the executive order.

The deal makes it seem increasingly likely that the bill will have the votes it needs to pass. When asked whether the votes were there, Stupak said “we’re well past 216, yes.”

Capping a weekend of frenzied negotiations and impassioned speeches, the U.S. House came to order shortly after 1 p.m. ET Sunday, beginning a day of debate on historic health care reform legislation that is expected to culminate in a final vote sometime Sunday night.

Democrats expressed confidence that the bill would pass. House Speaker Nancy Pelosi told reporters Sunday afternoon that the gavel Rep. John Dingell, D-Mich., used to preside over the House when it passed Medicare in 1965 would be the same she would use for the day’s proceedings.

“I will use it this evening when we cast a successful vote for this historic legislation,” she said.
But behind the scenes the vote-wrangling continued. Negotiators worked feverishly to craft a presidential executive order that would win the votes of a group of anti-abortion Democrats, led by Rep. Bart Stupak, D-Mich. The group wanted the bill to include stricter language prohibiting federal funding for abortions; Democratic leaders hope that a presidential executive order with some version of that stricter language will satisfy the anti-abortion group.

They picked up at least one vote Sunday morning, when anti-abortion Rep. Marcy Kaptur of Ohio said she would vote for the bill. But there were conflicting reports Sunday afternoon on whether Stupak himself was on board. MSNBC reported that a deal had been reached and Rep. Henry Waxman told the Washington Post that Stupak had said he would vote yes, but Stupak himself had not yet confirmed the vote.

Despite swirling rumors to the contrary, Representative Bart Stupak, Democrat of Michigan and a leader of anti-abortion Democrats in the House, is still a “no” vote on the health care legislation, according to his spokeswoman, Michelle Begnoche.

A protester also yelled “kill the bill” from the House gallery, and was cheered by Republican lawmakers, according to the Associated Press.

For those tracking the developments, the Washington Post has this health-care vote FAQ with explanations of the day’s timeline and other key questions. FOX News’ Speaker’s Lobby blog also has a guide to the timeline for the vote today, which could extend well beyond 6 p.m. ET.

The New York Times Prescriptions blog is live-blogging the debate, and Washington Post health care blogger Ezra Klein is updating his blog with developments as is Politico’s Pulse.

And C-SPAN is live streaming the action from the House floor.