Asthma attacks come with little warning and are often triggered by invisible particles in the air. Now, thanks to advances in Bluetooth technology, smartphones have become the newest weapon in the fight against asthma.

Propeller Health, a Wisconsin-based company, wants to help those with respiratory problems by supplementing medicine with technology. The firm has wired an inhaler with a Bluetooth transmitter to communicate with an asthma patient’s smartphone. This sensor activates when the inhaler is pressed, setting into motion a process that records the exact time and location of a patient’s asthma attack on a smartphone app. Doctors can view this data and see, not only how frequently the patient suffers attacks, but also tease apart the environmental factors that caused the distress.

“We see firsthand the value of collecting data, and so we see this as being the clear future of health care,” said Chris Hogg, the COO of Propeller Health. “[This technology] helps health care providers prioritize patients. With all the information coming off of the connected devices, [doctors] can really see who should be focused on.”

Smart inhalers are part of an emerging trend in medical technology known as “connected health.” Major tech firms have introduced ventures like Apple Health, a part of the iOS operating system that groups together biometric data recorded by apps and accessories. Meanwhile, medical equipment firms are installing internet connections on their devices, such as Continuous Positive Airway Pressure sleep machines, glucose meters and blood pressure monitors.

The Propeller sensor also sets out to manage medication schedules. On average, less than 50 percent of asthma patients take their medicine correctly, said Linda Neuhauser, a professor at University of California, Berkeley who researches asthma treatments. 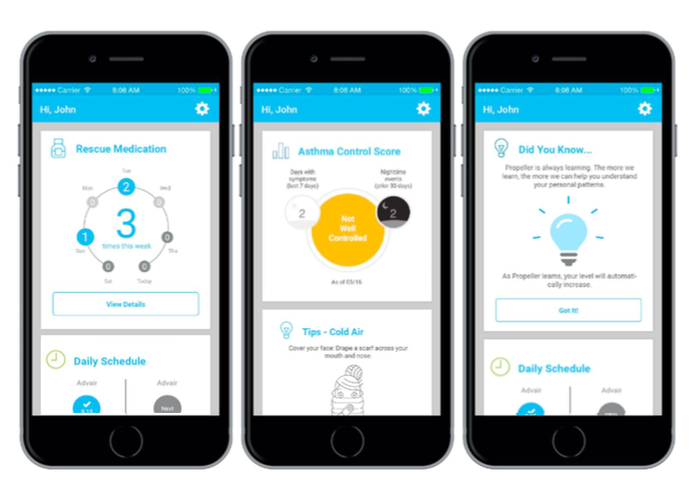 Screenshots of the Propeller app. Photo by Propeller Health

“The inhaler tells you, and your health care provider, maybe your parent, if you’ve taken your medication today correctly,” Neuhauser continued. “We know that if you take it correctly, you can avoid an attack, going to the emergency department, or being hospitalized.”

A study conducted by Propeller and Dignity Health, a California hospital system, found that asthma-related hospitalizations dropped from 1.9 to 0 among 330 patients who had attached the sensor to their inhaler during an 11-month period. These participants also experienced 60 percent fewer asthma-related ER visits.

“There’s a community aspect to collecting data like this. When we have a lot of users in the same town, or same region, we can do a lot to help them,” Hogg said. “We start to see hot spots and trends over time.”

One of Propeller’s biggest tests of their system was in Louisville, Kentucky, where they gave 140 asthmatic individuals sensors for their inhaler, and they recorded 5,600 uses over two years. The study found that proximity to railroads and utilities were the two major causes of asthma attacks, but they also found that public common areas, such as schools and places of worship were also full of asthma triggers. After the test, Propeller gave the data to the city,

It’s not cheap though. A standard albuterol inhaler costs $5 to $60, while the Propeller sensor has a unit cost of approximately $300. And while most connected health devices can be easily purchased online, the Propeller sensor is only available through a handful of health plans and sponsors. It is typically prescribed by a doctor.

Air quality monitors are another technological tool in the fight against asthma. One brand, Speck, has been used to research the causes of asthma attacks in the home.

“The Speck monitor measures indoor air quality, and this is the first time that parents, and older children, have had an opportunity to get feedback about the air quality inside their homes,” Neuhauser said. “Otherwise you just do what you think is good, and you just hope you’re reducing the allergens and irritants that might trigger asthma.”

Special correspondent Cat Wise reports on a California program that tries to keep asthmatic kids healthy in the place where they spend most of their time: at home.