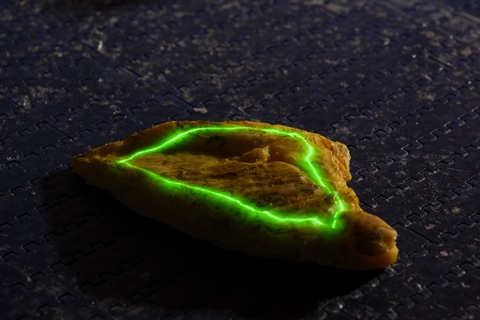 This laser projection system is a form of augmented reality. Different symbols can be projected to show workers what to do, such as trim the chicken before packaging. Photo by Georgia Tech Research Institute.

In the Harry Potter world, characters read newspapers with pictures that move. Where a photo normally sits, Quidditch players fly back and forth across a field. Goblins investigate the aftermath of a bank robbery.

With the development of augmented reality, technology in the real world is creeping closer to that of fictional scenario. Augmented reality software places computer-generated images on top of real world environments, such as a smartphone’s camera or a live television broadcast. Think of the yellow first-down line you see while watching a football game.
The concept of augmented reality first appeared in fighter jets, in what was called a Head-Up Display. It involved symbols projected onto a transparent glass screen, allowing pilots to better aim their weapons. When a driver glances at the speedometer or gas gauge, they briefly take their eyes off the road in front of them. This was a distraction that pilots could not afford.

Since then, augmented reality techniques have been implemented by numerous smartphone applications. The Layar program can recreate historical objects like the Berlin Wall by placing a computer generated replica of the wall on the phones of people scanning the original site. Yelp’s Monocle app displays information about nearby restaurants and buildings when a phone is pointed in any given direction. And Ball Invasion, a game by the developer 13th Lab, has players scan any room with an iPad’s camera, then uses the walls as part of a racquetball-style arena.

Beyond iPhones and other smarphones, augmented reality technology is being utilized by several industries. Here is a look at three of the ways in which it may soon impact our lives.

Researchers are developing an augmented reality system for use in the poultry industry. The system could help check for bacteria such as salmonella, and determine which parts of poultry need to be trimmed or thrown out. Temperatures of pre-cooked products as well as product shape, such as dinosaur-shaped chicken nuggets, could also be monitored more effectively. Lasers would project symbols ranging from simple dots to large shapes onto the products as they travel down the assembly line. A worker would then discard or modify them depending on the symbol shown. 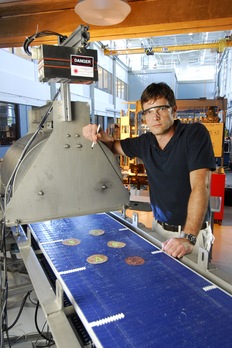 Use of the technology is still years out, according to Sim Harbert, senior research engineer at the Georgia Tech Research Institute, but as augmented reality technology develops and becomes more common, it will be easier to implement. “We continue to stay in the loop with the latest entertainment augmented reality research, since that is a great starting point for many of the systems that can be applied to processing in food or other areas,” he said.

The television show “Bones” features an imaging machine that can recreate how victims were killed by turning a bullet wound or head laceration into a three-dimensional hologram. While this is fictional, similar tools may soon find their ways into the hands of forensic pathologists. Eva Vincze and Ted Robinson of George Washington University are working on augmented reality software that allows specialists to analyze crime scenes in a lab. After a photograph of the crime scene is taken, a computer-generated grid is laid on top, allowing specialists to measure the location of objects and other evidence that would normally be measured at the scene itself.

“We’re thinking in terms of dangerous neighborhoods or even war zone situations where there is a great risk of loss of life if the forensic specialists would do the crime scene investigation in the normal way,” Vincze said. “The technology would reduce their risk exposure time.” Photographs could also be sent to specialists far away from the scene, allowing for a greater range of expertise to be utilized.

Vincze said the technology may be applicable to other fields that require precise measurement, such as architecture. “If you took an enhanced photo of any historical building or object and documented its dimensions with this technology and it later was destroyed, you could possibly rebuild an exact replica,” she said.

Imagine a class of first graders taking a field trip to Independence Hall. They put on a pair of glasses like ones used in 3-D movies, and begin to explore the building like a normal tour group. But as they make their way through the rooms where our founding fathers once sat, they see what looks like Thomas Jefferson sitting in a chair. He leads them on a scavenger hunt, taking them through the different rooms and having them search for objects that impacted the events of 1776.

“Situating the learning experience in the real place, but integrating virtual content with the real locations may add value,” said Blair Hardwick, technical analyst for the Ready To Learn initiative, which is developing augmented reality games for use in children’s education.

Along with historical sites, math education is a good candidate for the augmented reality software because concepts like geometry and physics are already represented in the real world. For example, as students move a toy truck along a desk, an iPad application could show how many degrees the tires have rotated. Such tactile interaction would aid the learning process, Harwick said.

“Because the interaction is physical, such as moving the phone or manipulating objects, it will be more direct and easy for kids to focus on what they are doing, not how they are doing it.”