From a doctor’s perspective, one of the most interesting scenes in the 1948 motion picture, “The Babe Ruth Story,” occurs at the film’s end. The scene depicts Ruth’s tragic death at 53 from a rare and deadly cancer of the nasopharynx (the air passages in the back of the nose and mouth).

The Babe, bumptiously played by William Bendix, bravely volunteers to take an experimental drug. As Ruth explained in his 1948 autobiography of the same name: “I realized that if anything was learned about that type of treatment, whether good or bad, it would be of use in the future to the medical profession and maybe to a lot of people with my same trouble.”

The audience watches Ruth’s doctors wheel him down a darkened hospital corridor, and then the film cuts to dozens of boys playing on the sandlots while an orchestra breaks out into a rousing rendition of “Take Me Out to the Ball Game.” An off-screen narrator confidently intones, “His name will live as long as there is a bat, a ball and a boy”. The End. 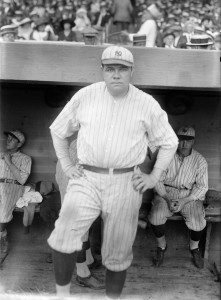 Babe Ruth was one of the first cancer patients to receive a combination of chemotherapy and radiation, a practice that doctors still use today.

More than 50 years after Babe Ruth’s death, the great medical journalist and doctor Lawrence Altman uncovered the Sultan of Swat’s intricate medical history on the pages of The New York Times.

Altman was reporting on a group of doctors who were retrospectively diagnosing Ruth (the common myth was that he had cancer of the throat or larynx, instead of nasopharyngeal cancer). But Dr. Altman revealed an even greater truth in his elegant essay: Babe Ruth was one of the original cohort of cancer patients who were treated with combinations of chemotherapy and radiation, a protocol — while far improved from those long ago days — is still employed in the treatment of a number of cancers.

During the fall of 1946, the home run king noticed that his voice was growing increasingly hoarse. Soon after, he experienced excruciating pain behind his left eye. One doctor thought it was dental in origin and recommended that a dentist yank out three of Babe’s teeth. Ruth only became more ill; he could barely speak or swallow. An x-ray revealed a large tumor at the base of the skull and his doctors prescribed an intensive round of radiation therapy, which did little to stem the malignancy or his painful symptoms.

In June of 1947, Dr. Richard Lewisohn and his team of researchers at the Mount Sinai Hospital of New York City were experimenting on rats with teropterin, an anti-cancer, folic acid antagonist drug extracted from brewer’s yeast. (A similar drug amphothopterin, or methotrexate, is used today to treat a variety of cancers and other diseases.) Dr. Lewisohn and his colleagues suggested a trial of teropterin for Ruth, even though it had never been used on human patients.

At first, the drug seemed miraculous. Ruth began to regain some of the 80 pounds he lost the prior year. On June 13, 1948, he felt well enough to don his old Yankee pinstripes, with the number 3 on the back, and play a starring role at the 25th anniversary of the opening of Yankee Stadium (the house he built).

His progress was short-lived, however, and a few days later he was admitted to Memorial Hospital (now Memorial-Sloan Kettering Hospital) in New York City. There remains some question over whether or not Babe Ruth was told he had terminal cancer, a diagnosis doctors often kept from their patients in that era.

Sadly, George Herman Ruth, perhaps the most beloved ballplayer ever to stand in the batter’s box, died of pneumonia on Aug. 16, 1948. His autopsy revealed metastatic cancer originating from the nose and throat. His body lay in state at Yankee Stadium for two full days, where hundreds of thousands of fans paid their last respects; his funeral was held before a jam-packed crowd of dignitaries at St. Patrick’s Cathedral on Fifth Avenue.

Who among us cannot cite at least one of Babe’s athletic accomplishments? He hit 60 home runs one season (1927). His 714 dingers held the lifetime record for 52 years, 8 months and 21 days until Hank Aaron smashed it on April 8, 1974. The Babe was the guy who hit three homers in one World Series game (1926) for a little boy named Johnny Sylvester who was perilously ill. And in 1930, when his salary topped that of Herbert Hoover, the president of the United States, Ruth countered, “I know, but I had a better year than Hoover.”

Babe Ruth was a hero to a legion of fans who followed his remarkable exploits on the diamond. But Babe Ruth was also a true Cancer hero. Today, thanks to the wonders of modern medicine, there are millions of cancer survivors — and many more millions of people who love those survivors.

As we mark the day Babe Ruth died, it seems appropriate that all of us take a moment of reflection for him and the thousands of selfless and dying patients who were “on first” when it came to trying chemotherapeutic therapies that became part of our arsenal against cancer. No one applauded their efforts, but they all hit the medical equivalent of a home run.