Autism Prevalence May Be Far Higher Than Believed, Study Finds 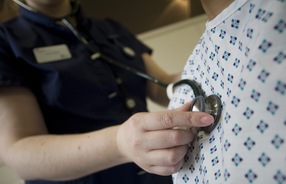 For the first time, researchers have studied an entire population sample and found that one in 38 children exhibited symptoms of autism. The study was published Monday in the American Journal of Psychiatry.

“These numbers are really startling” said Geraldine Dawson, chief science officer for Autism Speaks, one of the three organizations that funded the project. Most previous researchers have found that about one in 110 children is autistic.

The NewsHour explored the puzzling condition of autism in the recent Autism Now series, anchored by Robert MacNeil.

Autism Spectrum Disorder is a complex disorder that inhibits a person’s ability to communicate with others and develop normal social relationships. Some estimates say that in the U.S., one out of 70 boys is diagnosed on the autism spectrum. The Centers for Disease Control and Prevention has called autism a national public health crisis, but little is known about what precisely causes it and there is no cure, although researchers are working on new ways to treat the condition.

In the past when researchers have tried to determine the incidence of autism, they have studied children already identified with the disorder in a general population sample. But in this case, an entire school population of 55,000 children between the ages of 7 and 12 was screened, including those who had not previously been diagnosed. The children all live in Gyong City, South Korea.

Dawson told the NewsHour that the city is very representative of a “well developed area in a country with Universal Health Care.” She also said the study “raises very important questions” about just how many children really have symptoms of autism. “It’s really a call to action,” she said.

The researchers from the United States, South Korea and Canada said the study speaks more about how to do research on autism than it does about the actual numbers. But they also said it suggests that there are millions of children around the world who go undiagnosed in the general population.

Dr. Young Shin Kim of the Yale Child Study Center and his colleagues from George Washington University said they were so surprised to find that two-thirds of the autism cases they documented were previously undiagnosed and untreated among the mainstream school population that they went back and re-checked their data to be sure of its conclusions.

Kim said the findings “suggest that ASD is under-diagnosed and under-reported and that rigorous screening and comprehensive population studies may be necessary to produce accurate ASD prevalence estimates.”

Part of the research involved running focus groups with parents and teachers to identify local beliefs that might influence symptom reporting and to address stigma and misunderstandings related to Autism Spectrum Disorder.

A press release said further clinical measures were established by Korean diagnosticians in both the U.S. and Korea and were validated by North American experts.

Dawson said the results of the study now serve as a wake-up call to researchers in the west to use methodology of whole population samples because without that kind of research no one will ever be sure how many children have ASD. The numbers are “very likely to be higher than one in 110,” she said “but we really don’t know.”

Editor’s Note: This post has been updated from its original version to clarify language and correct typographical errors.