SAN FRANCISCO — The massacre at a gay nightclub in Orlando on Sunday sparked calls from leading AIDS researchers and gay-rights advocates for the federal government to rewrite guidelines that bar men who have had sex with men in the past year from donating blood.

I don’t think it’s appropriate given current testing technology.
Those guidelines have fueled outrage as gay men in Florida and elsewhere expressed anger that they weren’t allowed to donate blood to the victims of the deadliest mass shooting in US history.

Dr. Paul Volberding, director of the AIDS Research Institute at the University of California, San Francisco, said the policy requiring gay men to stay celibate for 12 months before donating blood was “not really supported by the facts.”

She added: “I can’t imagine that additional pain that people feel when they go in trying to help care for the survivors of this massacre and are unable able to donate blood because of a regulation that I don’t believe is supported by the science.”

The Food and Drug Administration issued the guidelines last December after rescinding a total ban on blood donations from men who have had sex with men. The wider ban had been in place for 32 years, ever since the AIDS epidemic began to escalate in the early 1980s.

Dr. Peter Marks, the deputy director of the FDA’s Center for Biologics Evaluation and Research, said last December that the 12-month window was based on “the best available scientific evidence” and the practices of other nations. (The United Kingdom, Australia, and New Zealand have similar policies.)

Anyone who has received a blood transfusion or has been exposed to another person’s blood accidentally must also wait 12 months before donating blood.

The American Medical Association commended the FDA for those guidelines at the time, saying that they balanced public outreach goals with the need to safeguard the blood supply.

But Volberding said the FDA’s position might be based on old fears and stigmas that don’t reflect current science. 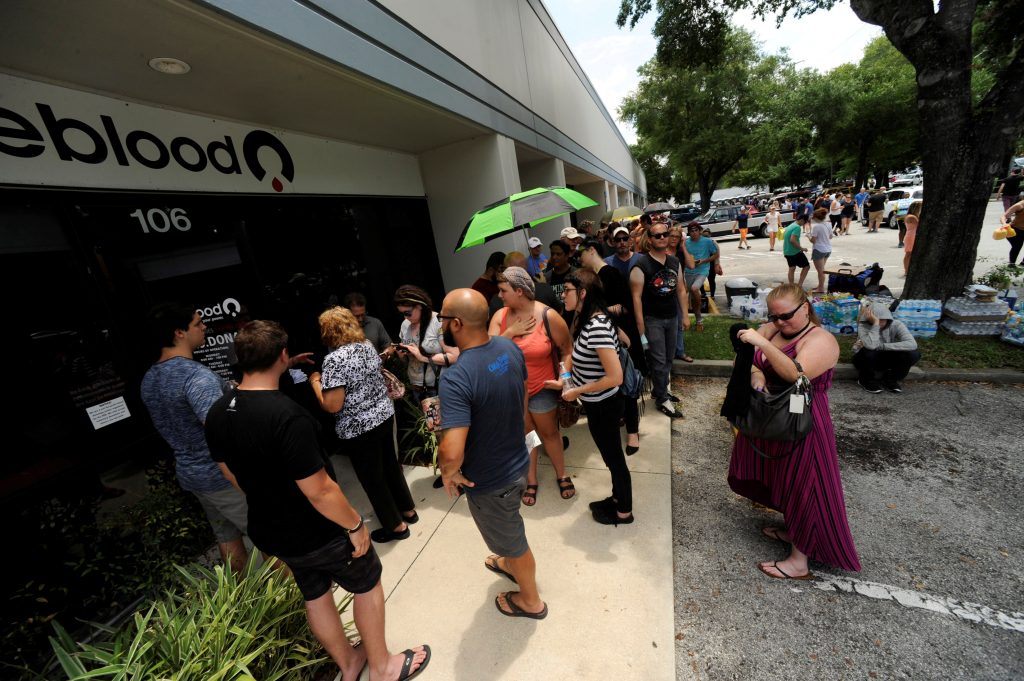 Hundreds of community members line up outside a clinic to donate blood after an early morning shooting attack at a gay nightclub in Orlando, Florida, U.S, June 12, 2016. Steve Nesius/REUTERS

“The testing methods [for blood-borne diseases such as HIV] are just amazingly accurate. We don’t miss infected people,” Volberding told STAT. “The window from the exposure to testing positive is as short as a few days.”

He said he hoped the Orlando situation would force a reexamination of the 12-month waiting period.

The National Gay Blood Drive, an organization that has pushed to lift the ban entirely, echoed the critique, calling the 12-month window “the result of an overabundance of government bureaucracy and caution, not science.”

Jay Franzone, the group’s communications director, called on the FDA to issue new guidelines urging blood banks to screen donors individually — for instance, by asking whether they’ve engaged in unprotected sex — rather than impose a blanket policy on all gay men.

Representative Jared Polis, a Democrat from Colorado who is gay, also tweeted his support for changing the federal guidelines.

We must overturn the morally bankrupt/dangerous ban on gay people giving blood. Absurd someone can't even donate blood to their own husband?

Others on Twitter sought to get President Barack Obama’s attention on the issue.

When the FDA issued the new guidelines late last year, Marks said the agency might allow individual blood banks to issue their own policies on donations from gay men. “It’s guidance, and not a rule,” Marks said at the time. If a blood bank wanted to set a shorter waiting period than 12 months, he said, “we would generally want to see what evidence they were using, and we’d make an individual determination based on that.”

It was not clear on Sunday whether any blood banks had sought permission to change the waiting period. One blood bank that was rumored to have ignored the federal guidelines later tweeted that it had not.

All FDA guidelines remain in effect for blood donation. There are false reports circulating that FDA rules were being lifted. Not true.

The Orlando Sentinel reported that local blood banks have been deluged with hundreds of people lining up to donate blood. They urged potential donors to schedule appointments for later in the week.

Left: A message towed by an airplane urges people to donate blood, after a mass shooting at a gay nightclub in Orlando, Florida, U.S. June 12, 2016. Photo by Carlo Allegri/REUTERS