Can Food Industry, Governments Work Together to Fight Obesity? 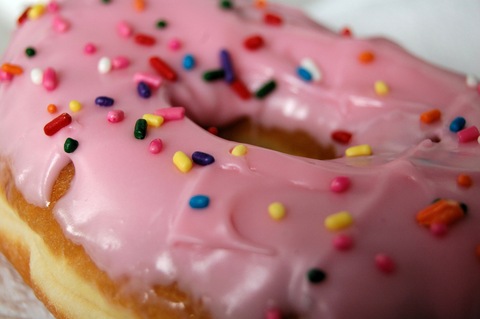 The food and beverage industry held a meeting on the sidelines of a health conference at the U.N. Photo by Flickr user mhaithaca.

NEW YORK | Food and beverage companies that make fatty, sugary products tend to not be viewed kindly by public health workers on the front lines, locked in an unending battle with obesity and its related diseases.

But the food industry can be a powerful partner too, if companies are willing to improve the content of products or change advertising approaches, as governments hoping to stem the tide of growing waistlines have found.

“It’s not the responsibility of the food and beverage industry alone to solve these problems,” said U.S. Health and Human Services Secretary Kathleen Sebelius at an event hosted by the International Food and Beverage Alliance in New York this week on the sidelines of high-level U.N. meetings on non-communicable diseases. “But we can’t solve them without you.”

In the audience was Andrew Lansley, secretary of state for health for the United Kingdom, which has partnered with private companies to voluntarily reduce salt content and eliminate trans fats through its oft-cited Health Responsibility Deal created this year.

“We can deliver more progress more quickly through a voluntary approach than we could through a regulatory and legislative approach,” he said. “If we can’t, if there is resistance then we have to take regulative approaches but actually the evidence is if we engage in a partnership approach we can make more progress.”

Across the street at the U.N., agency chief Ban Ki-moon had harsher words for companies that profit from the sale of junk food, especially those that market to children.

“I depend on our friends in industry to do what is right,” he pleaded. “There is a well-documented and shameful history of certain players in industry who ignored the science — sometimes even their own research — and put public health at risk to protect their own profits.”

But Ban also credited the biggest names in the industry with making strides to do the right thing.

The International Food and Beverage Alliance is hoping to build its reputation as a group of companies that has taken on that responsibility, setting goals in reformulating products to be healthier, providing clear nutritional information, regulating advertising of food and beverages to children and promoting physical activity. But it hasn’t been an easy road to get everyone involved. said senior vice president of global health and agriculture for PepsiCo, Derek Yach.

“The companies, many were initially reluctant to come on because they were going into new territory…many were fearful,” he said, and the often contentious tone of the industry vs. government debate doesn’t help.

He said thousands of products have been reformulated by companies in the alliance and gains have already been made in cutting trans fats and salt levels in particular. PepsiCo is on track to meet a goal of cutting 25 percent of salt from its products by 2015. But the lack of self regulation by smaller or mid-level food companies continues to be of concern. Similarly, talk of potential global regulation or targets for food content in low-and-middle income country markets raises product concerns.

While different companies have different issues with regulation, the idea of a more uniform set of industry rules appeals to some.

“It’s very easy to have laws on the books that never translate into laws on the street,” Yach said. “Those that tend to abide by the laws on the books [in the food industry] tend to be multi-nationals and a few leading companies which basically will lead us to an unlevel playing ground.”

Dr. Julio Frenk, dean of the Harvard School of Public Health, argued it is also in companies best interest to go through this process and develop foods and beverages that taste good but are healthful, since the market for these types of products is expanding.

“There is an enormous space here for innovation to generate a competitive advantage to industries that are able to get ahead of the game,” Frenk said. But he also emphasized governments should not rely on industry to take all these steps by themselves, and that some standard of regulation and good stewardship by governments will always be key in this movement.

As the draft agreement was formed for the U.N. non-communicable disease summit there was discussion of including a global salt reduction target and other food goals, but the item was eventually stripped from the document. With no hard targets for food or beverage content changes in the agreement, member governments and industry players will be left to chart their own course forward.

‘Somebody shot my girlfriend’: 911 call from police shooting of Breonna Taylor released

WATCH: Trump participates in roundtable with industry executives on reopening