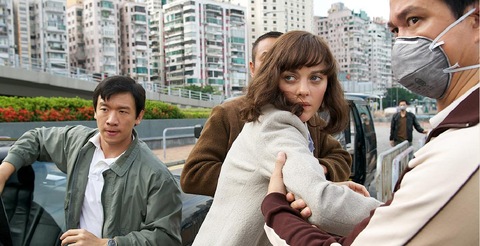 Scene from the movie “Contagion.” Photo from Warner Bros. Ent.

The box-office hit “Contagion,” a movie about a lethal airborne virus that kills within days, is still a top dramatic draw going into the weekend.

The film has drawn interest not just for its suspense and star-studded cast, but also for trying to realistically represent how an emerging disease could sweep across today’s highly inter-connected world.

So just how plausible is some of the science represented in “Contagion”? A group of Centers for Disease Control experts helped the NewsHour sort through some of the facts and found there is much in the film that relates to real life (additional information provided by the World Health Organization):

Contagion scenario: The deadly disease in the movie is modeled off a combination of influenza and a virus called Nipah, which causes inflammation of the brain and respiratory disease.

Reality check: Take a deep breath and stop Googling Nipah vaccines — for now — this combination disease is a Hollywood concoction and can’t exist in the real world, CDC virus experts told the NewsHour.

“Influenza and Nipah have incompatible genomes that are not capable of recombination in nature,” the CDC said in an email.

But Nipah is a real emerging disease in South Asia and can cause deadly brain inflammation in humans. It killed 105 patients in an outbreak in Malaysia in 1999, and caused 49 deaths in India during an outbreak in 2001.

Most Nipah outbreaks have not spread widely in humans, however, and have resulted in only a handful of cases. CDC virologists say Nipah is not highly consistent with a pathogen that could cause a global pandemic.

Currently there are no effective treatments or vaccines for the disease.

Contagion scenario: The virus is so transmissible it spreads to new locations around the globe within days.

Reality check: This setup is plausible and has already occurred twice, said the CDC, with the outbreak of SARS (Severe Acute Respiratory Syndrome) in 2003 in Asia, and the 2009 H1N1 pandemic. SARS spread to 13 countries on three continents in less than a month, and H1N1 spread globally within weeks.

*
Contagion scenario: The fictional virus reaches humans through a series of animal encounters: a bat eats some fruit then drops it in a pig pen, the pig eats it, then is butchered and handled by a chef who comes in contact with Gwenyth Paltrow.

Reality check: Pigs and bats are both real life culprits in Nipah outbreaks. The disease passed to humans through contact with infected pigs in Malaysia and Singapore, and through consuming fruit that was contaminated with urine or saliva from infected bats in Bangladesh and India. Bats in particular make great reservoir hosts for disease, meaning they can harbor the pathogen indefinitely with no ill effects.

“Contact with bats (or contact with intermediate animal hosts that acquired infection from bats) is a common theme among some recent emerging human infections,” said the CDC.

SARS, Ebola and avian flu, are just a few of the many other diseases humans share with animals. Food markets and food preparation are also a known path for disease to spread to humans — the SARS outbreak in 2003 was traced to human contact with an animal called a civet cat, which is sold for food in China.

Contagion scenario: As the disease rages on, quick work by scientists leads to a vaccine being developed within about four months.

Reality check: In the case of an entirely new virus emerging, developing a vaccine that fast would be unlikely, says the CDC. Flu vaccines, which are developed every year, take four to six months to create at minimum. For a brand new threat, identifying a new virus, formulating a vaccine, and taking safety of the vaccine into account would all take time.

“Assuming a vaccine can be created — that could take more time than 4 to 6 months,” the CDC said.

Contagion scenario: A process called contact tracing is carried out in the film by investigators trying to trace the disease through paths of social networks and interactions.

Reality check: This procedure is widely used during epidemiology investigations. It gives health authorities a sense of the extent of exposure and is used to develop the public health response in an emergency, said CDC.

Investigators will interview a patient or family members, track down patient’s contacts, retrace steps, screening people along the way and trying to identify the source. This process is used in everything from sexually transmitted diseases, to food-borne illness as was seen in efforts to trace the origin of the E.coli outbreak in Europe earlier this year.

It’s a labor intensive process, and privacy concerns have been raised in some cases, but it is considered a vital tool in outbreak response, especially early on before disease has spread too widely.

Learn how to plan ahead for a health emergency with the Red Cross and CDC response guide and steps to prevent flu and other infectious diseases.