Of the nine pregnant women in the U.S. with confirmed Zika virus cases, only three of the pregnancies have ended in live births, the Centers of Disease Control and Prevention said today. Many of the cases have involved infections during the first trimester, and their outcomes highlight the tough choices that pregnant mothers are facing when dealing with this mosquito-borne virus. Experts from the public health agency also voiced their surprise over the number sexually transmitted cases of Zika virus being reported in the U.S.

“We didn’t anticipate that we would see this many sexually transmitted cases of Zika,” CDC director Tom Frieden said during a telebriefing.

In a report issued today, the CDC provided details for 14 possible instances of sexually transmitted Zika that have been investigated since an initial case was spotted in Dallas in early February. So far, Zika virus has only been transmitted sexually from infected males to female partners.

For the six most advanced investigations, CDC has confirmed viral infection in two women, while another four cases have been deemed “probable.”

“In all [of these] cases, contact involved vaginal intercourse without a condom and occurred when the male partner was symptomatic or shortly after symptoms resolved,” said CDC epidemiologist Paul Mead. In two of the 14 investigations, Zika virus was ruled out, while the remaining six are ongoing.

Symptoms of the virus typically last for a few days to one week, but Mead said that it would take months before the CDC had an answer to the question of how long the virus survives in human semen.

Mead encouraged clinicians and the public to be aware of and follow the CDC’s advice for preventing sexual transmission of the Zika virus. The CDC recommends correct condom usage or abstinence for men returning from Zika-affected areas who have pregnant partners. According to the latest update from the World Health Organization, 31 countries and territories in the Americas are experiencing sustained outbreaks of the mosquito-borne virus.

The second part of the briefing outlined the outcomes for nine pregnant women in the U.S. who have caught Zika virus during journeys abroad. They picked up these infections while traveling to nine places with local outbreaks of the virus: American Samoa, Brazil, El Salvador, Guatemala, Haiti, Honduras, Mexico, Puerto Rico and Samoa.

Of the six women who had symptoms during the first trimester, two experienced spontaneous pregnancy losses. 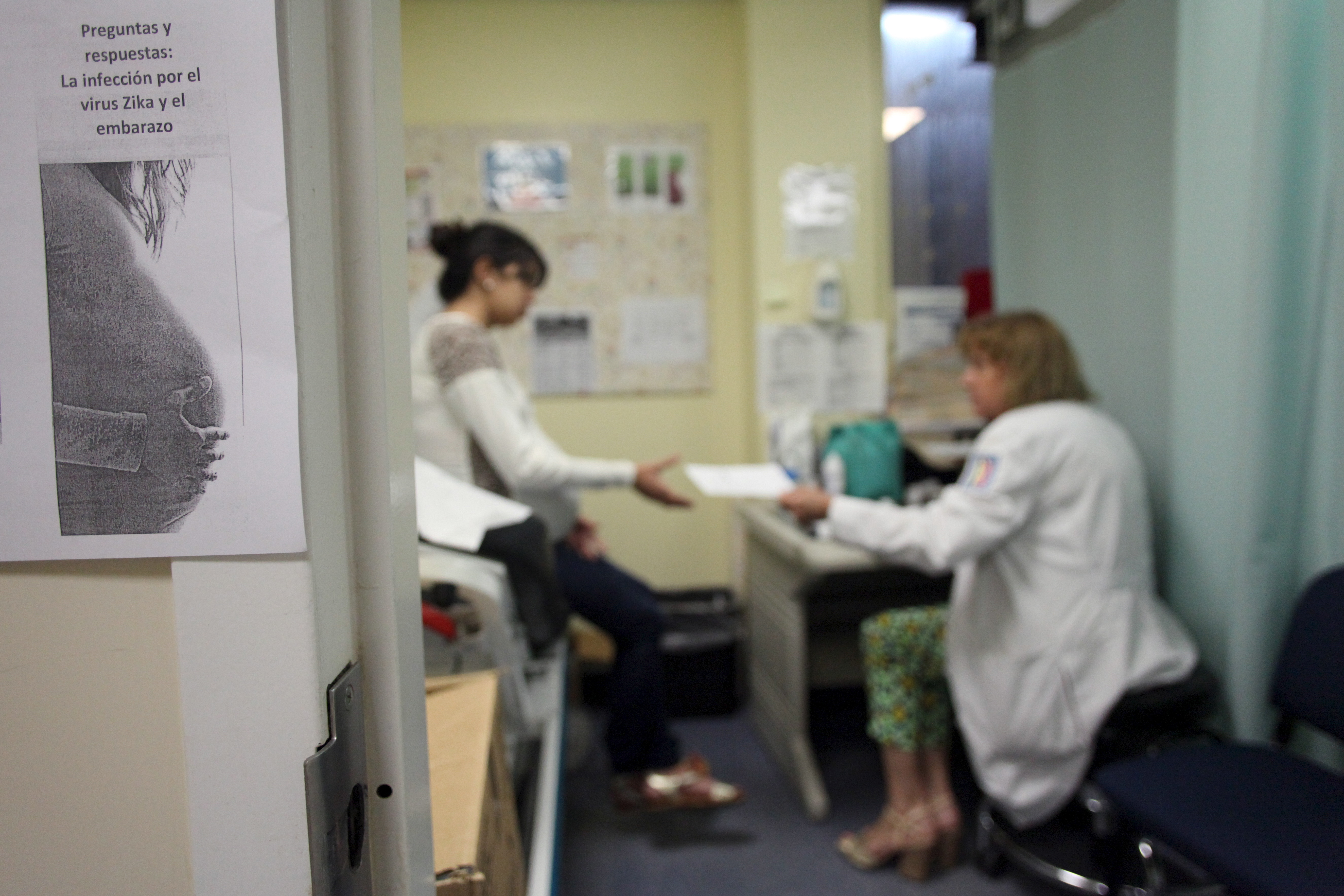 A flyer that reads, “Questions and answers: Ziza virus infection during pregnancy” is seen posted outside a doctor’s office, at a public hospital in San Juan, Puerto Rico. Puerto Rico has reported 117 cases of the virus. Alvin Baez/Reuters

“There are now a series of miscarriages among women who have been infected with Zika, and as we did report earlier with patients in Brazil, our lab identified Zika in the placental tissues there,” Frieden said.

However, Frieden emphasized that it’s too early to tell if the virus actually caused the miscarriages and that more research is needed. “It’s important to note that 10 to 20 percent of all pregnancies might end in a spontaneous miscarriage. The fact that [the virus] is present doesn’t mean that it caused them,” Frieden said.

In the cases of miscarriage, Zika virus appears to have also infiltrated the embryo itself, according to Denise Jamieson, co-leader on the CDC team investigating pregnancy and birth defects related to Zika virus.

“In the early spontaneous abortions, the products of the conceptions were positive for Zika,” Jamieson said.

She continued that in the other instances of Zika infection during the first trimester, two women elected to undergo elective pregnancy termination, while one woman delivered an infant with microcephaly and one pregnancy is continuing without complications. So far the only case of Zika-related microcephaly reported by the media occurred in Hawaii, but the CDC said today that they will not release identifiable information for any cases. Two additional women were exposed to Zika virus during their second trimester. One delivered a healthy infant, while the other pregnancy is ongoing. The final U.S. case of Zika infection during pregnancy happened in the third trimester and resulted in the delivery of a healthy infant.

The CDC continues to beef up surveillance for the virus. Frieden said 20 labs across the U.S. are now equipped to test for “active infections,” or people are carrying the virus. These tests involve detecting the virus’s genetic material.

The CDC is also expanding the reach of its testing for Zika-specific IgM antibodies, which could extend the time window for spotting the disease.

“IgM antibodies appear in the blood of a person infected with Zika virus as early as four days after the start of illness and can last for several weeks,” said Julie Villanueva, who is leading the laboratory team for the CDC Zika virus response team. In other words, these IgM antibodies can reveal if a person was infected Zika weeks after the symptoms have disappeared.

The U.S. Food and Drug Administration has granted an “emergency use authorization” — an expedited approval — so the IgM antibody test can be immediately used in hospitals throughout the U.S. and its territories. The CDC anticipates that there could be hundreds or thousands of American travelers returning from Zika-affected areas, so such a test could be crucial to monitoring the spread of the disease.

Studies into whether or not Zika virus is a definitive cause of the birth condition microcephaly and the adult autoimmune disorder Guillain-Barre remain ongoing, Frieden said, though the connection to the latter seems a foregone conclusion.

“Guillain-Barre is something that we see after many different infections, including West Nile virus,” Frieden said. “We would not be the least bit surprised if Guillain-Barre is definitely associated with Zika.”

Microcephaly is much more complicated, he continued, given that it is extraordinarily unusual for a pathogen, especially a mosquito-borne one, to cause this birth defect. Yet Frieden understands the need for urgency in finding answers.

“We understand that the occurrence of a fetal malformation, a fetal loss, a miscarriage or a child with a birth defect can be something that can be devastating to a family,” Frieden said. “That’s why we’re working so hard to understand more about what’s happening and how it can be prevented.”