Today, Sept. 22, marks the 45th anniversary of the death of Dr. Alice Hamilton. She died in 1970, at the age of 101. In 2007, the venerable Journal of the American Medical Association asked me to review her 1943 autobiography, “Exploring the Dangerous Trades,” which documents her incredible journey to become the founding mother of what is now known as occupational medicine.

Yet as the anniversary of her death approached, I felt compelled to reprise this story because her magnificent achievements merit so much more than a posthumous book review in a medical journal; indeed, it demands the celebration of the broad, American public. This is because no individual was more instrumental in warning people about the health risks and potential dangers of the industrial workplace than Alice Hamilton.

During her career, Dr. Hamilton secreted herself in factories without the permission of their owners, stood workers to beers after their shifts to better understand their working conditions, and exposed herself to multiple risks. On one occasion, she was taking a much-needed nap in a mining shack. A miner thought she was a prostitute and propositioned her. In 1963, she modestly shrugged her shoulders as she told an oral historian about these incidents, “I used to have to do those things.”

During her distinguished career, Dr. Hamilton inspected and wrote about pottery plants, printing plants, smelters, steel mills, mines and munitions factories. She scientifically demonstrated the grave health risks of lead, carbon monoxide, phosphorus, benzene, picric acid and many other toxic substances that permeated many workplaces of her era. In the process of this work, she helped prevent countless cases of lead poisoning, benzene-induced malignancies, black lung disease, anemia and factory mishaps.

She earned her medical degree from the University of Michigan in 1893. From Ann Arbor, she moved on to internships at Minneapolis’ Northwestern Hospital for Women and Children and Boston’s New England Hospital for Women and Children, followed by two years of study in pathology and bacteriology in Leipzig, Munich, and, finally, Baltimore, where she studied at the famed Johns Hopkins Medical School. 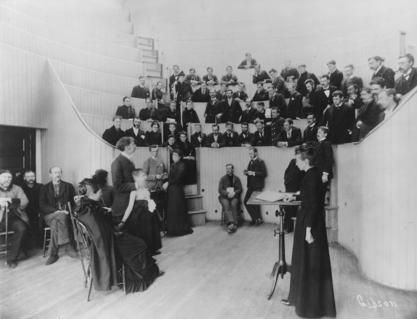 Alice Hamilton in an anatomy class, circa 1893. Photo from Bentley Historical Library, University of Michigan

In 1897, Dr. Hamilton took a position teaching pathology at Northwestern University’s Women’s Medical School in Chicago. In the “Windy City,” she became affiliated with Hull House, the world-famous settlement house founded by Jane Addams in 1889. She lived there for 22 years and developed important working relationships with Addams, Julia Lathrop (an expert on infant mortality and, in 1912, the first chief of the U.S. Children’s Bureau) and Florence Kelley (a leading child labor law and minimum wage advocate), as well as several other activists marching on the vanguard of Progressive Era social reforms.

One of Dr. Hamilton’s first duties at Hull House was running a well-baby clinic for the impoverished immigrant mothers and children in the neighborhood. Blessed with a profound sense of humility and awareness, she recorded the clash of cultures that transpired daily as she examined these children:

When I see the varied diet modern mothers give their babies, anything apparently from bacon to bananas, I realize that those Italian women knew what a baby needed far better than my Ann Arbor professor did. I cannot feel I did any harm, however, for my teachings had no effect. (p. 69)

Although deeply committed to her work at the settlement house, Dr. Hamilton also took on investigations of typhoid fever, tuberculosis and cocaine abuse in Chicago. In 1908, she was appointed to the Illinois Commission of Occupational Diseases and, in 1911, to the U.S. Department of Labor. It was then that she began a tireless pursuit of what she called “exploring the dangerous trades.”

In 1919, Hamilton became the first woman faculty member at Harvard Medical School, albeit on a part-time appointment. Ironically, women still were not allowed to matriculate into that medical school — an advent in equity that would not occur until 1945. Harvard’s hiring of a woman professor inspired a great deal of chatter from newspapers across the nation. To such critiques, Hamilton sharply rejoined: “Yes, I am the first woman on the Harvard faculty — but not the first one who should have been appointed.”

Her career hardly ended with these stellar accomplishments; until her death in 1970, Hamilton continued to crusade for the health of all Americans, leaving an indelible, lasting and positive mark on the public’s health.

Sadly, ours is an era when so many lives around the globe are still endangered by environmental toxins, dangerous workplaces and hazardous living conditions. We engage in a marketplace where many consumers eagerly purchase cheap products that have the potential to escalate such practices. As we celebrate the accomplishments of Dr. Alice Hamilton, all of who care for hard-working people should strive to emulate her ability for listening attentively to those who barely thought they had a voice, ferreting out the dangers lurking in unsafe factories and workplaces, and bravely acting to insure those problems were fixed or, at least, avoided.