Cholera has officially spread to Port-au-Prince, where more than a million people are living in crowded tent camps and slums, prime conditions for spreading the highly contagious disease. 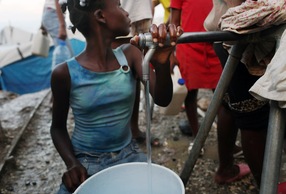 Testing confirmed a 3-year-old boy living in one of those tent camps as the first case of cholera originating in the capital city, chief medical officer of Hospital Bernard Mevs, Toni Eyssallenne, told reporters. The boy has not traveled outside of Port-au-Prince or had any known contact with anyone from the Artibonite region of Haiti where the outbreak began.

More than 9,000 people have been hospitalized and at least 583 people have died of cholera since it first surfaced in Haiti in October, according to the Ministry of Health.

The heavy rains and flooding over the weekend from Hurricane Tomas brought fresh fears that the epidemic cannot be contained.

“The flooding and mudslides from last week’s hurricane pushed rivers over their banks, very likely spreading cholera further,” said deputy director of the Pan American Health Organization, Jon Andrus. “The bacteria has a foothold in the river system and other bodies of water and it will remain.”

Andrus said Port-au-Prince is particularly “ripe for the spread of cholera” because of the poor water and sanitation conditions.

“We have to prepare for a large upsurge in numbers of cases [in Port-au-Prince],” he said.

At least 73 city residents are experiencing symptoms of cholera, the Ministry of Health reported Monday, including severe diarrhea and vomiting, leading to acute dehydration.

Julie Sell with the American Red Cross in Haiti said the organization is going tent to tent trying to teach people the importance of proper hand washing and boiling drinking water in an effort to stave off the disease.

“Cholera is not a difficult thing to prevent,” Sell said, but the limited water resources do cause problems. “If your choice is between drinking water for your families or washing you hands several times a day, a lot of people are going to drink that water.”

Within the camps, tensions are running high as rumors of cholera cases swirl, she said, but only time will tell how successful efforts to keep cholera from entering the Port-au-Prince communities will be.

“We are all just holding our breath,” said Sell.