When her youngest daughter, Olivia, was in middle school, Mary watched her disappear behind a screen. (Names have been changed to protect the family’s identities). Her once bubbly daughter went from hanging out with a few close friends after school to isolating in her room for hours at a time.

“She started just laying there not moving and just being on the phone,” says Mary. “I was at a loss about what to do.”

Olivia had always been kind of a nerd, a straight-A student who sang in a competitive choir. But she desperately wanted to be popular, and the cool kids talked a lot about their latest YouTube favorites.

“I started trying to watch as many videos as I could, so, like, I knew as much as they did,” says Olivia. “The second I got out of school, I was checking my phone.”

At her house in the Oakland hills, Olivia would dart to her room, where she’d curl up until after dark, watching video after video. When she finally emerged, she says, she was often bleary-eyed, hazy and slightly wired.

Mary says she was walking on eggshells around her daughter; Olivia was often in a foul mood and quick to anger after staring at her small screen for hours.

Over time, Olivia started watching videos of girls fighting each other. They’d pull each other’s hair, scratch violently and sometimes knock each other out. Olivia and her friends rooted for certain fighters.

“I think it was just fun to watch because they would make me laugh,” Olivia recalls. “And at that time I was having a pretty hard time dealing with depression and anxiety.”

“I got the idea to overdose online. I was researching how many pills I had to take to die.” Olivia, 13

Olivia’s parents were arguing a lot and she wasn’t connecting with her dad at all. Then her grandmother died. For the first time in her life, it was tough to keep up with school.

“She woke up one morning really depressed, and I brought her to the hospital,” Mary says, lowering her eyes. Olivia had received a poor grade on a test and told her mom she wanted to hang herself, so she spent nearly a week at a psychiatric hospital under suicide watch.

When she was released, she started clicking on how-to videos about ways to commit suicide. “I got the idea to overdose online,” says Olivia. “I was researching how many pills I had to take to die.”

Three weeks later, she ended up in the hospital again after downing a bottle of Tylenol.

“She was home alone and we had been told to lock it up, but we just didn’t think this would ever happen,” says Mary, who is now in tears.

Olivia’s parents were shattered, and desperate to find a way to help their daughter.

When Olivia was released from her second hospital stay, her family checked her into an addiction recovery center for teens called Paradigm. The high-end facility is a converted mansion at the end of a winding road in San Rafael. The family is tapping their retirement accounts to pay the $60,000 fee for Olivia’s six-week, in-patient stay.

Jeff Nalin, head psychologist and co-founder of Paradigm, has been treating teens for substance abuse for more than 20 years. In the last few, he says, he’s seen an increasing number of cases similar to Olivia’s. She was diagnosed with depression that led to compulsive internet use.

The teens are using smartphones and tablets for the same reasons they’d turn to hard drugs — to numb themselves from what’s really going on inside, he said.

“I describe a lot of the kids that we see as having just stuck a cork in the volcano,” says Nalin. “Underneath there’s this rumbling going on, but it just rumbles and rumbles until it blows. And it blows with the emergence of a depression or it emerges with a suicide attempt.”

Most teens come to Paradigm because they’ve hit bottom in the same way an addict will. But the treatment for internet addiction is trickier, because you can’t really function in today’s society without interacting with the digital world.

“The best analogy is when you have something like an eating disorder,” says Nalin. “You cannot be clean and sober from food. So, you have to learn the skills to deal with it.”

When Does Obsession Become Addiction?

Digital addictions, whether to social media, video games, texting, shopping or pornography, are not official mental disorders listed in the Diagnostic and Statistical Manual of Mental Disorders (DSM). But researchers see the same patterns in digital addictions as in other substance abuse.

“The teens are using smartphones and tablets for the same reasons they’d turn to hard drugs — to numb themselves from what’s really going on inside.”

“Addiction begins with intermittent to recreational use, then progresses into daily use, and then progresses into consequential use, which in some cases will progress to life-threatening use,” says Anna Lembke, a Stanford University psychiatrist and addiction expert. “That’s followed by a pattern of consequences like insomnia, dysfunctional relationships and absent days at work or school. That’s the natural narrative arc of any addiction, and the same is true with an internet addiction.”

China has labeled internet addiction as a mental disorder, and that’s surprising — historically the Chinese have called addiction a moral failing rather than a clinical disorder.

Some experts attribute China’s change in attitude to the widespread involvement of middle- and upper-class Chinese adolescents in addictive behavior. “A little like our opioid addiction here,” says Lembke. “People say no one cared about the opioid epidemic until it affected white suburban kids.”

Lembke predicts internet addiction will become a validated clinical diagnosis in the U.S. as more and more cases mirror Olivia’s.

Dr. Elias Aboujaoude, a psychiatrist and the director of Stanford’s Obsessive Compulsive Disorder Clinic, says there’s also increasing physiological evidence that the internet is addictive. “There are studies that have looked at people’s brains while they’re online, and their brains start looking like those of someone who has a substance abuse disorder. Similar pathways seem activated.”

“There are studies that have looked at people’s brains while they’re online, and their brains start looking like those of someone who has a substance use disorder. Similar pathways seem activated.”

He also says feel-good brain chemicals like dopamine that spike in a heroin addict also become elevated in people who compulsively use the internet. Tolerance also builds, says Aboujaoude, just as it does with hard drugs. “People needing more and more time on a particular online video game, for example, to get the same kind of euphoric feeling.”

Psychologists are still studying whether it is the internet itself that is addictive or specific behaviors people engage in while online, like shopping, video games, pornography and gambling.

“My view is that it is both,” says Aboujaoude. “These behaviors have long been known to be addictive, but the internet, in part by making them so easily accessible, changes the equation and increases the likelihood that they will become addictive.”

Some experts compare internet addiction to gambling addiction. Even though most of the time when you sit in front of a slot machine you don’t win, every once in a while you do. And that intermittent reward is what hooks people.

Think about your own devices. Most of the time when your phone dings, the notification is about something trivial, but every once in a while it’s meaningful — like an alert that someone has tagged you in a Facebook photo. Experts say that kind of message is irresistible. 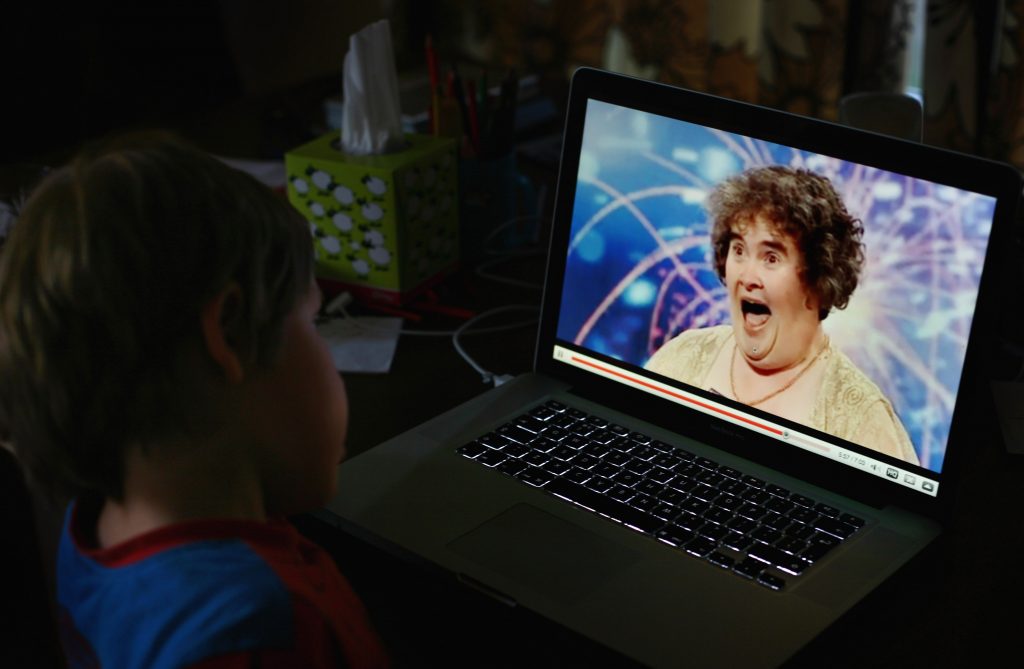 “If we see kids playing video games or watching YouTube videos, in our eyes it’s as if they’re wasting their time and not being productive,” psychology professor Patrick Markey says. “We might want them to be outside playing baseball or something, but for that generation that’s their pixelated playground. It might not be a sign of a pathological behavior.” Photo by Jeff J Mitchell/Getty Images

Still, not everyone is convinced that “addiction” is the right way to think about this compulsion. Chris Ferguson, a psychologist at Stetson University, believes moral panic is fueling the rush to label the problem an addiction. “Sometimes with new technology you see these heightened claims of harm, these exaggerated focuses on the detriment of the new media.”

Patrick Markey, a professor of psychology at Villanova University, agrees that society should go slow in using the “addiction” label. He worries some researchers are casting an age bias on younger generations.

“If we see kids playing video games or watching YouTube videos, in our eyes it’s as if they’re wasting their time and not being productive,” Markey says. “We might want them to be outside playing baseball or something, but for that generation that’s their pixelated playground. It might not be a sign of a pathological behavior.”

Markey acknowledges it’s possible to spend too much time interacting with a screen. But both he and Ferguson believe that spending long hours on the internet falls into the same category as other behaviors that healthy people can overindulge in — like sex, food, exercise, religion and work.

“There’s no agreement about whether these pathological behavioral disorders are really the same things as substance abuse addictions,” says Ferguson. “But in my opinion they’re not comparable to, say, methamphetamine addiction or heroin addiction.”

A Crusade for Change

Even as researchers debate whether the internet is clinically addictive, many if not most of us feel tethered to our devices. That’s not a coincidence. Tech companies are invested in hooking people into spending more and more time online, and they’re getting better and better at it, says Tristan Harris, a former design ethicist at Google. His job, he says, was to help the company create products that weren’t inherently manipulative.

“When you look at the Facebook news feed, it’s not just some neutral thing,” Harris explains. “That’s powered by massive farms of computers who are calculating with Ph.D.s and large data sets: how I can get you to scroll.”

Harris quit Google to form a nonprofit called Time Well Spent, because, he says, he was disgusted by the tech industry’s race for our attention.

“Never before in history have a handful of technology designers working at three tech companies influenced how a billion people spend their attention,” Harris says.

He’s on a crusade to inspire Facebook, Google and Apple to design products that don’t deliberately manipulate kids like Olivia.

Back at Paradigm, Olivia is getting ready for a session with her therapist, who will help her integrate her devices back into her life. Olivia says she’s petrified to check her Instagram and Snapchat accounts when she powers up her phone for the first time. “I’m worried about when I do go back on my phone what’s going to be there,” Olivia says in a trembling voice. “What have people been sending me?”

When she returns to school this week, Olivia says she doesn’t plan to isolate herself again. In fact, she’s asked her mom to restrict her phone use, so that she can’t use the phone when she’s alone. Instead, she’ll be talking to her therapist about what’s going in her life, in outpatient treatment after school four days a week, for at least another month.