How a Coney Island sideshow advanced medicine for premature babies

It was Coney Island in the early 1900’s. Beyond the Four-Legged Woman, the sword swallowers, and “Lionel the Lion-Faced Man,” was an entirely different exhibit: rows of tiny, premature human babies living in glass incubators.

Barkers, including a young Cary Grant, called out to passersby, enticing visitors to come see the preemies.

The brainchild of this exhibit was Dr. Martin Couney, an enigmatic figure in the history of medicine. Couney created and ran incubator-baby exhibits on the island from 1903 to the early 1940s, and though he died in relative obscurity, he was one of the great champions of this lifesaving technology and is credited with saving the lives of thousands of the country’s premature babies.

The first doctor to use incubators for preemies was French obstetrician Dr. Stéphane Tarnier, who witnessed an incubator warming baby chickens at a Parisian zoo in the late 1870s, according to medical historian Dr. Jeffrey Baker. Tarnier thought he could use a similar device to save the premature babies dying of hypothermia in Parisian hospitals. While other European obstetricians pointed out that Tarnier’s first devices were hardly different from the hot water bottles and blankets used in many maternity wards, Baker writes, “such criticisms missed Tarnier’s most important contribution, which was to convince his colleagues that incubators (of whatever design) really made a difference.” 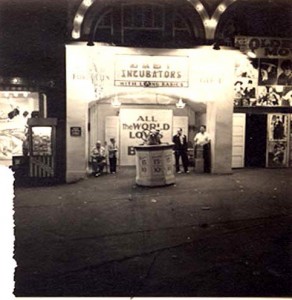 A picture of the Coney Island Incubator sideshow facade at Luna Park ca. 1941. Photograph is courtesy of Beth Allen.

A second generation of European obstetricians refined the incubators, adding individual thermostats and better ventilation systems, and spread the word about these new technologies through demonstrations at various expositions and Worlds Fairs. It was in 1896, at the Berlin Exposition that the French-born Dr. Couney first saw these new glass and metal incubators keeping premature babies alive and decided to import them to the United States, where they were extremely rare.

Couney’s first incubator baby exhibit on Coney Island was at Luna Park, one of several amusement parks along the boardwalk. He opened a second at the neighboring Dreamland soon after. Visitors paid a few coins to enter and would approach rows of incubators along the wall, peering through the glass windows at the tiny, shriveled preemie babies living inside.

Many of the infants in the exhibits came to Couney from local maternity wards that couldn’t care for them. (In the early 1900s, preemies had very high mortality rates, and often weren’t expected to live.) Couney’s own daughter was born prematurely, and she too spent time in one of her father’s Coney Island exhibits. 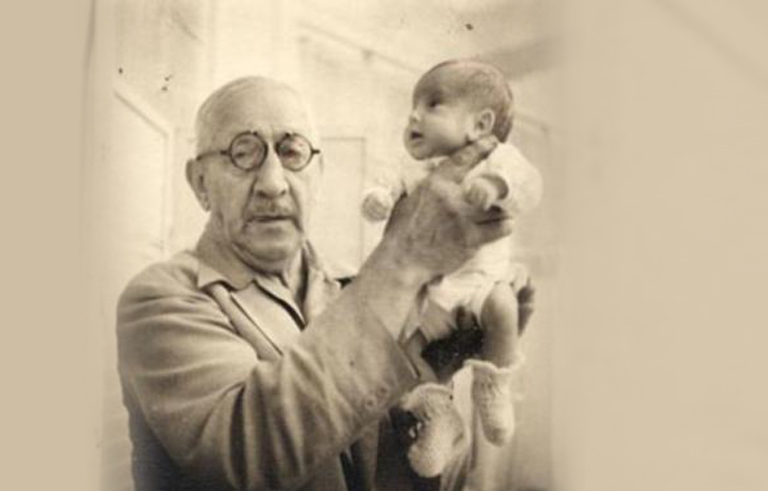 A picture of Beth Allen and Martin Couney taken in 1941 at Luna Park, from the Coney Island History Project web site. Photograph is courtesy of Beth Allen.

Couney never charged parents for the care he provided, which also included rotating shifts of doctors and nurses looking after the babies. According to historian Jeffrey Baker, Couney’s exhibits “offered a standard of technological care not matched in any hospital of the time.”

In a wonderful interview recorded by Storycorps and aired on NPR, a former incubator baby from one of Couney’s exhibits described how fragile she was at birth: “My father said I was so tiny, he could hold me in his hand,” said 95 year-old Lucille Horn, who was born prematurely in 1920 at the shockingly low birth weight of under two pounds. Baby Lucille was given no chance to live by her doctor.

“I couldn’t live on my own, I was too weak to survive … You just died because you didn’t belong in the world.” Horn said. But Horn’s father, who had seen one of Couney’s exhibits on his honeymoon, bundled tiny Lucille up and took her out of the hospital. “I’m taking her to the incubator in Coney Island. The doctor said there’s not a chance in hell that she’ll live, but he said, ‘But she’s alive now,’ and he hailed a cab and took me to Dr. Couney’s exhibit, and that’s where I stayed for about six months.” (Listen to the entire interview here, including Horn’s recollection of going back to Coney Island years later and meeting Dr. Couney in person.)

Other parents took more convincing. Beth Allen, who was born in a hospital in Brooklyn at 1 pound 10 ounces, recalls her own story via email.

“My parents knew about the incubator baby “sideshow ” in Coney Island and were reluctant to send me there,” she wrote. “Dr. Couney came to the hospital and spoke to my mother and she agreed to put me under his care.”

Allen spent three months on exhibit at Luna Park. She weighed five pounds when she left. (A recorded interview with Allen, from the Coney Island History project, can be heard here.)

Couney always claimed a higher purpose for his summertime exhibits — to show how a marvelous new technology could save fragile children, and, in so doing, to prod a reluctant medical establishment to embrace that technology. But given that he was often sharing a crowded boardwalk with the exploitative “freak shows” of the day, it’s hard to know exactly what drew visitors through his doors. 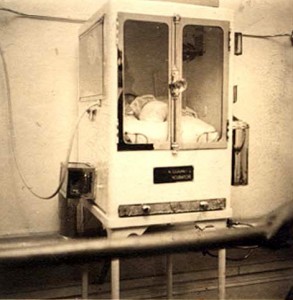 Was Couney an evangelist or a showman? Medical historian Jeffrey Baker calls this “the essential question about Couney. I suspect he had a bit of both in him.” (For example, Couney was known to occasionally dress his preemies in overly-large baby clothes to emphasize how tiny they were.)

For his part, Couney bristled at the idea that just because his work was on Coney Island, it wasn’t in the interest of childrens’ health. “All my life I have been making propaganda for the proper care of preemies, who in other times were allowed to die,” he told The New Yorker’s A.J. Liebling in 1939.

Charles Denson, director of the Coney Island History Project, which features photos from Couney’s exhibits, told the New York Times that Couney and Coney Island were a perfect match: “Couney was ahead of his time, and he found a place that was receptive to his dreams.”

It wasn’t until after his death that incubators became common in hospital maternity wards — Couney died in 1950 in relative obscurity — but the families acknowledged the powerful impact he had on their lives. From former incubator baby Beth Allen:

“Although I have just a vague memory of his house, my parents and I visited Dr. Couney every Father’s Day for several years.”

On tonight’s NewsHour, William Brangham talks with Deanna Fei, whose memoir “Girl in Glass” tells of the traumatic premature birth of Fei’s daughter, and the controversy that broke out over the cost of her medical care.

Left: A crowd gathers around an announcer at a sideshow on the boardwalk at Coney Island in the 1930s. Photo by A. E. French/Archive Photos/Getty Images