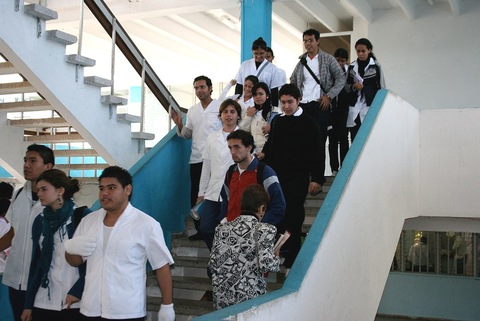 On Wednesday’s NewsHour, Ray Suarez wraps up his series on Cuba with a look at its medical diplomacy efforts around the world.

HAVANA, Cuba | In an old naval academy on Havana’s western shore, thousands of low-income students from around the world — including 100 from the United States — are getting a free medical education thanks the Cuban government.

The Latin American Medical School, “ELAM” in Spanish, was conceived by former President Fidel Castro following Hurricanes George and Mitch, which devastated parts of Central America and the Caribbean in 1998. After sending 1,000 doctors to hard-hit communities, Cuba decided to offer long-term help by providing medical training to students in those countries. Soon, thousands were accepted from around the world.

Students must pass an entry test, and have at least a high-school diploma and a solid academic record. Preference is given to low-income applicants. In return for receiving a free medical education, students make a non-binding pledge to practice medicine in underserved communities.

The Cuban government foots the bill for each student — around $10,000 to $15,000 a year — according to the school’s Vice Rector Maritza Gonzalez Bravo.

Gonzalez says hundreds of thousands of doctors are urgently needed around the world, and the goal is to increase those ranks as quickly as possible.

“In any country, regardless of its wealth, if we know that its people are in need of health services, and there are young who feel the need to change the reality in their hometowns, we open our arms to them, to train them so they can change the situations in their communities,” said Gonzalez.

Some 50 U.S. students have graduated from ELAM. Those graduates must pass the same licensing exams as U.S. medical students and apply for residency programs at American hospitals. But unlike in the United States, students at ELAM spend up to a year learning Spanish, Cuban history and culture, and then dive into a curriculum that is focused on preventative health. And because many medical supplies, like advanced diagnostic equipment, are in short supply, students learn medicine the old-fashioned way: listening closely to a stethoscope, relying on their hands to feel for abnormalities.

The school, like most things in Cuba, is not without controversy. Some critics say the school is simply a propaganda tool for the Castro government. But during the NewsHour’s visit, we spoke with a number of students who seemed genuinely grateful to the Cuban government and eager to help out their communities after graduation.

First-year student Anniver Maegaasia, 22, is from the Solomon Islands. When asked why she was studying medicine in Cuba, Maegaasia replied, “In my country, there is no medical school.”

She says most people in the Solomon Islands are very poor, including her own family, so she jumped at the opportunity to get a free medical education in Cuba.

Her own family’s lack of access to quality medical care prompted her to become a doctor. Her mother is battling cancer and her younger sister died of the disease at age 13.

“Her lab tests were sent to Australia and it took months to get the results back,” explained Maegaasia. “In Cuba, one doctor looks after the whole family. Back home, the government doesn’t care as much about health care. Here it is about prevention.”

Maegaasia says the campus environment at ELAM is fairly strict, but she appreciates being able to focus on her studies without “distractions” such as the Internet or cell phones.

Emily Brown, 25, says she came to Cuba so she can give back in her home state of Pennsylvania.

“This school is going to allow me to become the doctor I want to be,” said Brown. “I won’t be paying back a huge debt when I graduate, so I’ll be able to work at a free clinic or volunteer in communities that need me most.”

New Orleans native Tia Tucker, 28, says her training in a resource-poor country like Cuba will help her when she starts a practice in rural Louisiana. “We did a workshop in New Orleans this summer and people were psyched about what we are learning here. They said, ‘Yeah, I want to live in a community where the doctor can come to my house.'”

In addition to free tuition, pretty much everything the students need at school is given to them: lab coats, shoes, text books and a bag of toiletries once a month. They also get a 100 pesos monthly stipend, about $4, which they say is enough to buy snacks and to get around the city. But students admit the conditions at the school are not luxurious.

Cassandra Curbelo, from Miami, is one of the older students on campus at age 32. “For a lot of us who are here, versus what your typical U.S. med student looks like, we don’t have a lot of perks at home,” she explained. “But if you live in a building that is too hot during the summer and too cold during the winter, then you are going to understand better what your patients’ lives are like.”