Designing a better way to cope with Alzheimer’s

It’s a sombering statistic: 36 million people suffer from dementia worldwide, according to the World Health Organization. By 2050, that number is expected to triple. A whopping $600 billion is being spent globally each year to treat and care for those with dementia.

During the course of my reporting for a NewsHour story on innovation and aging, I heard a common theme about the need for new solutions to help seniors “age in place” in their own homes, to provide support for the caregivers (often family members), and to keep costs down. Many of the entrepreneurs working with the San Francisco based start-up incubator Aging 2.0 are trying to do just that, and some like BrainAid are specifically focused on developing apps geared toward those with cognitive impairment and Alzheimer’s. But clearly there is a lot of need out there for some fresh thinking about aging with dementia.

That need inspired faculty at Stanford University’s Center on Longevity — whose mission is to “redesign long life” — to launch a design challenge last fall. Partnering with the Aging 2.0 team, they invited students around the world to submit ideas for new products that can maximize independence for those with cognitive impairment.

“Students are often exposed to new ideas that aren’t contaminated by old ways of thinking,” says Ken Smith, Director of Mobility at the Stanford Center on Longevity who is spearheading the student competition. “Our goal was to get the students thinking about issues that come up with aging and we were hoping some unique solutions would come forward.”

Some pretty cool ideas did come forward. Fifty-two teams of students from 15 countries submitted their designs, and seven finalists were chosen by Smith and his colleagues.

Here are the finalists: 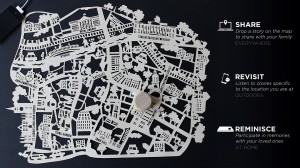 Memory Maps: This system, using GPS technology, lets those with early-stage cognitive issues and their families record memories and then coordinate them to a map with the real-world locations where they took place.

Caresolver: This app by Harvard University’s Arick Morton would give lay caregivers support to facilitate coordination with a larger caregiving team. 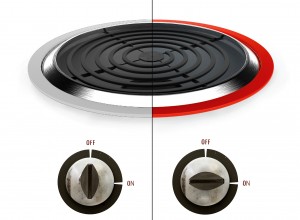 ThermoRing: A plastic ring goes around an electric stove burner and changes from black to red to warn people the burner is still hot.

EatWell: A 7-piece tableware set designed by San Francisco Academy of Art graduate Sha Yao would help people with Alzheimer’s have better control while eating. Yao’s experiences caring for her grandmother, who had Alzheimer’s, made her realize that meals can be tricky for people with cognitive impairment. EatWell’s anti-slip bowls and curved spoons help users to feed themselves. And she chose the colors carefully. “I found research by Boston University which discovered that 24 percent of Alzheimer’s patients can eat more food if the color of their tableware is red or blue.” said Yao. “That’s very useful information I combined into my product.” 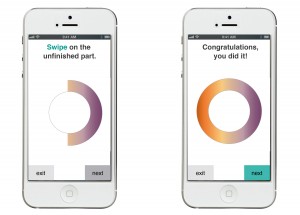 Confage: This game-like app helps people with memory and hand-motorics issues learn the gestures needed to use touch-screen devices. 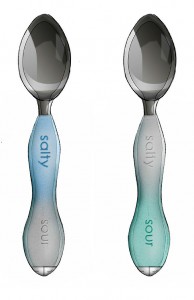 Taste+: This spoon helps those who have lost some of their sense of taste by electrically stimulating their taste buds.

Each of the finalists received $1,000 and several months of mentoring from corporate sponsors. The winner, who will be announced at Stanford in April, will receive $10,000. Ken Smith says several well-established companies have already expressed interest in learning more about the students’ designs.

Left: Sometimes even the simplest household items, like dinnerware, are hard to navigate for individuals suffering from dementia. So a student designed EatWell with anti-slip bowls, curved spoons and bright colors. See more innovative designs below.